For the upset, Huskies’ defense must stifle ‘Bama

LSU’s 10-0 defeat to Alabama offered the Huskies some clues about how to defend against the Crimson Tide’s huge offensive line and keep some pressure on a turnover-prone freshman QB. 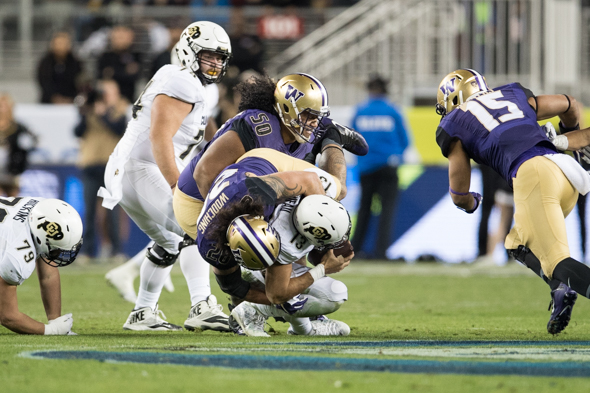 LB Psalm Wooching and Vita Vea (50) ganged up on Colorado QB Sefo Liufau in the Pac-12 Conference championship in Santa Clara, CA. The task will be much harder Saturday against Alabama. / Drew McKenzie, Sportspress Northwest

Against a 13-0 team that has the depth of talent of Alabama’s Crimson Tide, there are no easy tasks. For the University of Washington in the Peach Bowl college football playoff semifinal (noon Saturday, ESPN), however, it’s all on the defense to make the upset possible.  The offense will be busy keeping from being eaten.

The first obvious thing is the sheer size of the Tide’s offensive line. Of the 19 linemen listed on the roster, only one is under 250 pounds. The other 18 average 312 pounds.

Huskies LB Keishawn Bierria said he couldn’t remember a game in his career against a line that big.

“They’re huge,” Bierria said before the team left for Atlanta. “Throughout the year, we’ve faced a lot of big linemen, but across the board, they’re pretty stout. Pretty big.”

Any chance the defense would get psyched out?

“Wouldn’t you want to play against the best?” Bierria said.

Bierria’s attitude was echoed by players and coaches. But the fact is coach Nick Saban could probably rush for 100 yards behind the Tide’s big men, if he has eligibility left.

Instead, Saban will hold the clipboard, and leave the running to a talented stable of bruisers. Alabama’s ground game averages 5.7 yards per carry and 245 yards per game, the 14th-best rushing attack in the nation. Freshman QB Jalen Hurts is the team’s second-leading rusher behind RB Damien Harris.

At six-foot-two and 209 pounds, Hurts easily found huge lanes created by his line — 841 yards and 12 touchdowns.

If for some reason the ground game slows, Hurts has the arm strength to open up room. Hurts threw for 2,592 yards and 22 touchdowns, enjoying his pick of talented, tall receivers.

Defensive coordinator Pete Kwiatkowski said film of Alabama’s 10-0 win over LSU Nov. 5 showed what it would take to slow down the Crimson Tide. The Tigers forced five three-and-outs, recovered a fumble, and made a stop on fourth-and-goal from the one yard line before finally allowing 10 points in the fourth quarter.

“That’s what it’s going to take. Play with great leverage, keep the ball in the chute and have great tackling. If they get plays on us, we’ve got to do a great job in the red zone and make them earn it.”

Turnovers will be Washington’s best chance to give its offense a shot. The Crimson Tide have coughed up the football 19 times, 10 fumbles and nine interceptions, 68th in the nation in turnovers lost.

That plays into Washington’s hands. The Huskies have the best turnover margin in college football, 14 fumbles and 19 picks, while committing 13 of their own.

Defensive backs coach Jimmy Lake said that the huge gap between the Pac-12 Championship and the semifinal gave staff and players plenty of time to look for possible weaknesses.

“There’s stuff you can take from that tape,” Lake said. “There are a couple of teams that played with them for a while, but then they can’t finish at the end. There’s bits and pieces that we can take from defenses that they’ve played against. But at the same time we’ve just got to do what we do and make sure we finish.

“This is awesome to have this much preparation time. You don’t really have to rush and make decisions like you would on a game week, where you have a day and a half to say, ‘OK, this is what we’re doing,’ Now you can sit back and really think about this.”

If Lake spotted any weak points, he didn’t share them with the media. But if the Huskies take the lessons from film and execute at the level they had most of the season, Washington has a chance.

All they have to do is find a way to score against the best defense in the country.