Skip Hall, who coached with Don James for 18 years, including 12 at Washington, has a better perspective than anyone on the Peach Bowl coaches, Nick Saban and Chris Petersen. 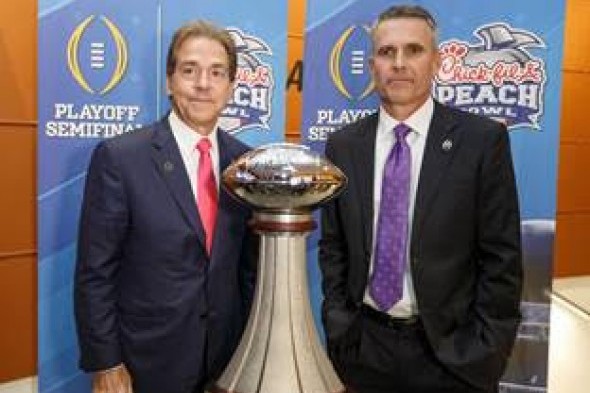 Three Decembers ago, after Jim Mora officially removed himself from consideration to replace USC-bound Steve Sarkisian as head football coach at the University of Washington, Merle “Skip” Hall telephoned one of his contacts in the school’s athletic department and recommended strongly that Boise State head coach Chris Petersen be given a serious look.

“I said, ‘I sure hope you’ve got Coach Pete on your short list,’” Hall recalled. “I said, ‘Look, I know what he’s all about and in my opinion this is the best fit you are going to find.’” 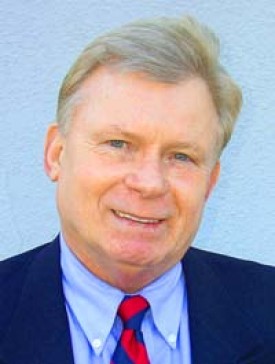 “She had a whole list of questions and we went through as much as she wanted,” said Hall. “Two days later, Washington had a new football coach.”

Hall’s push for Petersen packed considerable weight with Cohen, now the school’s athletic director, who helped negotiate the deal that brought Petersen to Seattle. She grew up in Tacoma as a diehard Huskies fan who idolized legendary UW coach Don James (1975-92). Hall worked under James as an assistant for 18 years, including two at Colorado, four at Kent State and 12 at Washington. And, as a Boise resident, he had observed Petersen’s work with the Boise State Broncos for nearly a decade.

Hall’s own 30-year coaching odyssey started the year after he graduated from Concordia College in Moorhead, MN., class of 1966.

“I got a job as a head high school coach in Henning, MN., right out of college. It’s a small town, about 1,000 people,” Hall explained. “We had unbelievable success, losing only one game in three years. I wanted to get my Masters degree and see what big-time college coaching was like. I was offered some graduate assistantships and took the one at the University of Colorado because it was Big 8 football.”

That’s where Hall met James, then Colorado’s defensive coordinator. After working alongside James for two years in Boulder, Hall was asked to join James’ staff when James secured his first head coaching job, at Kent State in 1971.

Kent State had on its roster future Pro Football Hall of Famer Jack Lambert, whom James and Hall brilliantly converted to middle linebacker, and a smallish but tough safety named Nick Saban.

“Nick wasn’t real big and didn’t have a pro future or anything like that, but he was a fierce competitor,” said Hall. “He didn’t like to lose and wouldn’t accept mistakes even back then. Nick was from West Virginia and thought about going back there after college to work with his dad, who had a business. But after he got done playing, Coach James convinced him to give coaching a try. So he stayed on as a graduate assistant. Nick’s wife, Terry, had another year of college, so it worked out well.”

Kent State’s other graduate assistant was Gary Pinkel, who followed James to Washington in 1975 and spent a dozen years working with the Huskies’ offense before striking out as head coach at Toledo (1991-00) and Missouri (2001-15).

When James, Hall and Pinkel left Kent State for Washington, Saban stayed behind to coach linebackers (1975-76). He has since won five national championships, including four in his current gig at Alabama, and is likely to go down, at least in Pinkel’s opinion, as “the greatest college football coach ever.”

“I never would have been a coach if not for Don James,” Saban said via video during a memorial for James in October 2013.

“Back then, we had a freshman team,” Hall said of his Kent State days. “In addition to helping coach the varsity, I was the head coach of the freshman team and Nick was my defensive coordinator. So I had a chance to watch Nick up close as a young coach, and you could tell he was on it. You could tell that if this is what he wanted to do, he would be good at it.”

Hall helped coach the Huskies through nine bowl games before he departed in 1987 to become head coach at Boise State. He went 42-28 in six seasons and twice led the Broncos to the Division 1-AA playoffs. After Boise, Hall spent four years (1993-97) as an assistant at Missouri, working under Bob Stull, with whom Hall had also worked at Washington, and then retired from coaching with 30 seasons in the books.

Relocating to the Phoenix area, Hall spent nearly a decade working for Aflac, primarily as a regional manager, motivational speaker and recruiter. In 2006, he returned to Boise, where he worked in the financial services industry and became sought-after speaker, emphasizing team building.

Petersen was working as a defensive assistant for the Broncos when Hall returned to Boise and the two became acquainted.

“I got to know Coach Pete and his family, who went to the same church as we did,” said Hall. “Another connection was our middle grand daughter, who was a classmate of Sam Petersen, coach Pete’s son. They did a lot of things together, and that brought us together at times. Coach Pete and I also did some speaking together, Chamber of Commerce-type things.”

Over the years, Hall came to recognize how astute Petersen was and the similarities he shared with James. So when the Washington job opened after Sarkisian’s departure, Hall instinctively understood that Petersen was probably as close to a replacement for James as the Huskies were likely to get.

“There are many similarities with Coach James and Coach Pete,” said Hall, “and there are some differences. The similarities are pretty obvious: the organization, the discipline, the hard-work aspect, the integrity, the insistence on doing things the right way, and the passion both have not only for the game itself, but for the players.

“Coach James used to say that if all you are ever remembered for is football, then you are going to waste most of the years of your life. I think Coach Pete has the same philosophy.”

James struck many observers as aloof, but his players got a different glimpse. During his years at Kent State and Washington, he and wife Carol hosted breakfast at their home every Sunday during the recruiting season to help new players orient themselves into his program.

“That became a huge hit every year,” said Hall. “Now let me tell you what Coach Pete does. When new players come in, they have to learn everybody else’s name, where they’re from, something about them and their home town. Everybody has to learn about everybody.

“The players are assigned lockers. In a few weeks, everybody has to move to another area of the locker room and get to know new people. All the players switch lockers several times. What this translates into is that these guys get to know each other, they come to care about each other and, man, does that make a difference.

“Coach James had a different personality than Coach Pete, both good in their own way.  Coach James coached from a distance in a tower (James was inspired to do that by former Alabama legend Bear Bryant). He wanted to see all the drills and didn’t want to miss anything. He’d make notes and then coach the coaches. Coach Pete is a little more hands on, on the field more. But he also delegates to his coaches, which is another similarity.”

Hall was part of three coaching staffs that played Alabama. While at Colorado, the Buffaloes defeated the Crimson Tide in the 1969 Liberty Bowl.

“We beat Bear Bryant in that game,” said Hall. “That was my first exposure to major college football, and I was hooked after that.”

In 1975, James’ first year at Washington, the Huskies traveled to Tuscaloosa to face another Bryant team.

“It was so hot, we were in trouble before the game even started,” said Hall. “I was coaching from the press box with Jim Mora (senior), and halfway through the second quarter, Mora looks at me and says, ‘Skip, this game could be in the 80s, and I don’t mean the temperature.’ They were romping an stomping and coming at us like crazy.”

“A few years later (1978), Alabama came to Seattle and beat us by three points (20-17),” Hall continued. “That was a marker of how our program had developed. We should have won the game. Spider Gaines dropped a touchdown pass. But our team had made tremendous strides. That game was a marker for us. We were doing it right, recruiting the right people. We just had to keep it going.”

The Huskies kept it going  — a Sun Bowl, two Rose Bowls, two Aloha Bowls, an Orange Bowl and a Freedom Bowl — all the way until Christmas Day, 1986, when they faced Alabama again, this time in the Sun Bowl in El Paso, TX.

“You could just see the difference in the team speed,” said Hall. “When we got back to Seattle, Coach James changed our recruiting philosophy, emphasizing speed and quickness. It made a big difference.”

Of all the games Hall was involved with at Washington, perhaps the one most similar to Saturday’s Peach Bowl in the Georgia Dome was the 1985 Orange Bowl. No national playoff existed then, but Washington was ranked No. 4, as now. Oklahoma was No. 2 and in position to win the national championship with a big win coupled with a BYU loss to Michigan.

The Sooners were a two-touchdown favorite, as is Alabama now. The Sooners, as do the Crimson Tide now, had a powerful defense – featuring All-America LB Brian Bosworth, among others — for which Washington appeared to have no answer.

Nobody had blocked Tony Casillas in two years. So in the week before the game, Hall helped devise a blocking scheme designed to neutralize the consensus All-America choice.

“We chip-blocked him,” said Hall. “He would start up field and we’d blindside him and open up a big hole. We devised a scheme that Oklahoma never really got onto until late in the game.”

The Lombardi Award winner a year later and a future NFL All-Pro, Casillas proved no factor as the Huskies blew by him for 192 rushing yards.

“A few days after that game, the Oklahoma coaches came to Seattle and wanted to know how we came up with that scheme,” explained Hall. “It was so effective.

“You give a coaching staff a month to prepare and sometimes it can come up with a scheme, a blocking scheme. You try to block this Alabama team one-on-one and you’re going to have a big problem. I know Washington has been working on something, something new. But they need to come up with a scheme to take advantage of the angles. Alabama has backups that will be drafted into the NFL.”

Hall is confident that if anyone can concoct a winning plan, it’s Petersen. But Hall is also well versed in Saban’s history and skills. It’s doubtful there will be a more interested Peach Bowl observer Saturday than the 18-year James assistant.