DE Michael Bennett is no longer underpaid in the NFL marketplace. The Seahawks extended his contract for three more seasons, a max value of $31.5 million, with $17.5 million guaranteed. 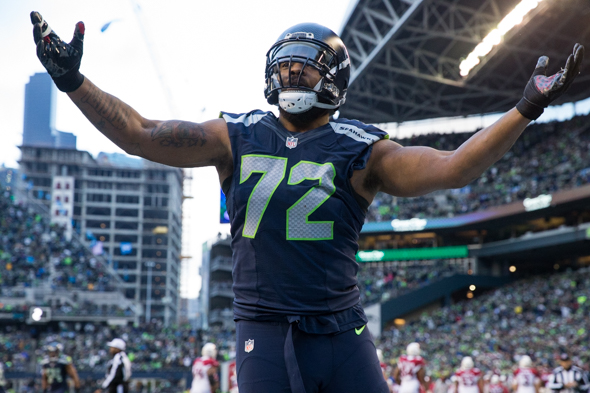 Michael Bennett, after a two-year lamentation that he was underpaid, has a new deal. / Drew McKenzie, Sportspress Northwest

Michael Bennett recalled this week a moment four years ago when he and fellow defensive end Cliff Avril, then only lightly acquainted as new Seahawks teammates, engaged in a sideline argument during a game that was caught by TV cameras. Bennett couldn’t recall what it was about.

“I’m pretty sure it was something vulgar,” Bennett said. “I don’t know what I said to him, but he was mad for a little bit. He got over it. I told him, ‘I guess our wives couldn’t be friends anymore.’ He busted out laughing.”

Since then, the have become close friends, something of a rarity in the rapidly churning world of NFL rosters.

“Every once in a while,” Bennett said, “you have to get in a fight to fall in love.”

Perhaps a little of that lesson might be applied to Bennett’s relationship with the Seahawks. For the past two seasons, Bennett has outperformed his contract, as well as nearly every other defensive end in the NFL. He let the Seahawks, and everyone else, know that he felt he was underpaid, creating some low-level tension.

But he showed up for every practice and every game, health permitting, and busted his backside. Friday, he had a little love returned.

Bennett signed a three-year contract extension worth $31.5 million, with $17.5 million in guarantees, according to NFL.com. Talks for extension have been reported underway for some time, so the news is not altogether surprising.

“Mike is a very unique football player,” he ssid Friday afternoon. “He’s not the biggest or  strongest or fastest. He’s just a terrific football player. We try to utilize him in positions where he can use his savvy and natural feel.

“There’s times he takes chances that bite us. But the great majority of the time he’s able to use his instincts and the scheme to play the defense we want, and allow him to wreak havoc. I would think most people who play us are really concerned about Mike.”

Carroll said there was no particular issue that resolved just now.

“It just took time, that’s all,” he said. “Mike was the next guy up. Things like this don’t always work out. We’ve had a master plan all along: Reward the guys who’ve been with us; reward the core players. This is just another expression of that.”

The news was welcomed by the club and players because it no longer will be a thing. Heading into the regular-season finale Sunday in San Francisco, the Seahwks are wounded and in some disarray. So the news of something good happening was welcomed.

As SS Kam Chancellor found out to his dismay with a holdout in 2015 that proved futile, the Seahawks have a firm policy of no renegotiation of any contract until its final year. Bennett, 31, is in the third of a four-year deal he signed in 2014, which was paying him a total of $28.5 million, including $16 million guaranteed.

Since the third year ends essentially when the season ends, which could be in 10 days, the Seahawks can say their policy remains intact.

“Michael is extremely excited and appreciative of Seattle and (owner) Paul Allen and (general manager) John Schneider and (coach) Pete Carroll for redoing his contract,’’ Doug Hendrickson, Bennett’s agent, told the Seattle Times Friday morning. “He wanted to stay in Seattle and he wanted to retire as a Seahawk. This will allow him to do that, so he is tremendously excited to have them rework his deal and pay him more commensurate to what the top defensive linemen are making.’’

Bennett is among the game’s most feared disrupters. His new deal’s average of $10.5 million puts him 10th on list of salaries compiled by Spotrac. The nine players ahead of him are all younger.

As a free agent from Tampa Bay in 2013, Bennett signed a one-year deal for $5 million. The next year, as a starter, he signed his second deal deal with Seattle, which given his production, turned out to be a good one for the club.

Bennett missed his first significant stretch of games as a Seahawk this season. He sat out five games after arthroscopic surgery to repair a knee injury after he was cut-blocked by Eagles lineman Ryan Mathews.

But against the Arizona Cardinals Sunday, he had half a sack, two tackles for loss and four quarterback hits, indicating he’s close to his former self.

He now can afford to return to his sack dance of three hip thrusts, which drew an unsportsmanlike conduct penalty, and fine, in the 24-3 win over the Rams. But apparently, in his new role of well-paid elder statesman, he is declining the opportunity.

“I don’t have any clarity,” he said this week about what constitutes a rules violation. “I just know that they take a lot of money from me. So my wife told me to stop dancing. I’m done with that for a little bit.”

Carroll was asked whether the investment in positions might change with the offensive line having problems.

“These guys are growing up with us and we’re really excited about that,” Carroll said. “No question this is their first year together; we have a chance to keep it pretty solid. We’ll reap the benefits with continuity, and then their time will come.

“It’s not about spending money. It’s about getting the right guys in the right spots. Hopefully, this will be the offensive line of the future that we’re really proud of.”