Washington took a 7-0 lead over Alabama, but a pair of turnovers jump-started the Crimson Tide on their way to a 24-7 victory Saturday in the Peach Bowl in Atlanta. 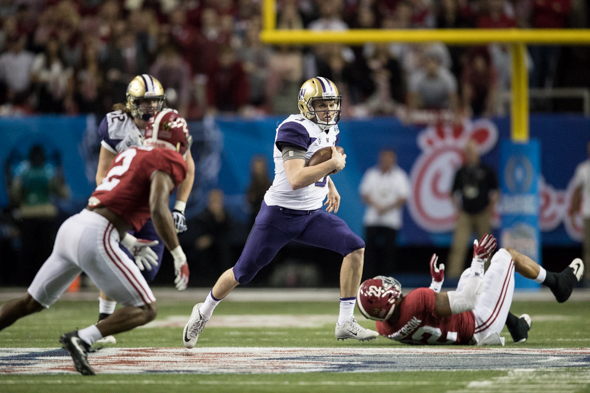 The one thing Washington could not afford to do against No. 1 Alabama it did twice: Turn the ball over. Killer giveaways, both in the second quarter, handed the defending national champion Crimson Tide 10 points to launch a 24-7 victory over the Huskies in Saturday’s Peach Bowl at the Georgia Dome in Atlanta that ended UW’s underdog dream of a national title (box).

The win in the national semifinals means Alabama (14-0) will play again for the national championship Jan. 9 in Tampa against Clemson, which crushed Ohio State 31-0 in the Fiesta Bowl semifinal later Saturday.

QB Jake Browning and WR Dante Pettis collaborated on a 16-yard touchdown midway through the first quarter to stake Washington to a 7-0 lead. But Alabama dominated the rest of the way and would have won by a far bigger margin had not the Huskies’ defense, except for a lapse or two, performed so admirably.

After the touchdown, Washington’s offense, which entered averaging 44.6 points per game and was No. 2 in the nation in efficiency, was swallowed whole by Alabama’s No. 1 ranked defense (11.8 ppg). Browning hit 11 of his first 13 passes, then went 1-for-10 as UW fell out of contention. The Huskies’ longest play of the day was a 20-yard Browning to-Myles Gaskin pass completion in the first half.

Compounding the misery, the Huskies had terrible field position. Six of their first 10 drives started inside their 20-yard line. All were 3-and-outs.

Alabama answered Washington’s first-quarter TD with a nine-play, 78-yard march that ended with RB Bo Scarbrough’s 18-yard TD run. The Tide took a 10-7 lead on Adam Griffith’s 41-yard field goal, set up when WR John Ross fumbled on a strip play. Then a Browning misplay took out the Huskies.

With 1:13 remaining in the first half and Alabama up 10-7, Browning faced a second-and 10 from his 32-yard line from the shotgun. Alabama LB Reuben Foster blitzed untouched, forcing a bad decision. Instead of throwing the ball away, a back-pedaling Browning floated a pass to RB Lavon Coleman in the flat, where LB Ryan Anderson snatched it for an easy pick six and a 17-7 lead.

Three plays — the Ross fumble, the Browning pick-six, and Scarbrough’s run — set up or accounted for 17 of Alabama’s 24 points.

Alabama is 39-0 under head coach Nick Saban when it is +2 in turnover margin. Saturday the Tide was +3.

Washington had season lows in points and total offense (194 yards). The Huskies hadn’t had so few points since LSU held them to three in 2012.

Browning completed 20 of 38 passes for 150 yards and one TD, but none except the touchdown to Pettis did damage. Browning was sacked five times, hurried on almost every dropback and threw two interceptions.

Browning’s first-quarter TD tied the Pac-12 single-season record for touchdown throws with 43. Browning’s pick-six ended a streak of 104 consecutive passes without an interception.

The Huskies rushed for 44 yards, 34 by Gaskin, and failed to get any chunk plays. Only five plays went for 15 or more yards. Alabama entered allowing 63.3 rushing yards per game, tops in the nation.

Alabama held Ross and Pettis to a combined eight catches for 41 yards. Ross caught five for 28, but Browning couldn’t find him in the second half, which he ended without a catch.

Washington had one chance to get back into the game on 4th-and-1 with 14:50 to play. Browning pooch-punted for 50 yards, pinning the Tide on its two-yard line. But three plays later, Scarbrough broke two tackles behind the line of scrimmage, slipped three others and romped 68 yards for the sealing touchdown.

The Huskies held QB Jalen Hurts to 57 passing yards, but was bulldozed by Scarbrough, who finished with 180 rushing yards after his 68-yard TD. Alabama finished with 269 yards on the ground.

The Huskies led the Pac-12 in turnovers, but didn’t force one. But they held the Tide to 4-for-14 on third downs and 0-for-1 on fourth down.

“They are kind of who we thought they were — a really, really elite championship defense. That Alabama defense is as good as I’ve ever seen, maybe ever.” — UW coach Chris Petersen

“I’m proud of our guys. They’ve raised the bar. There are some guys that will leave this place better than what they found it.” — Petersen