Thiel: 3 plays that could have stemmed Tide

Alabama’s defense was as advertised, but three makeable plays by Washington would have at least turned the Peach Bowl into something other than another notch on the Crimson Tide’s belt. 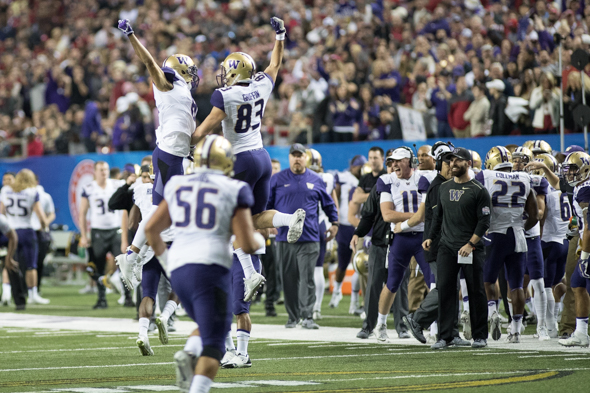 In the same season Washington ended its long regional nightmare with a 70-21 win over Oregon, the Huskies discovered Saturday afternoon they were still behind the No. 1 team in the NFC South . . . er, college football nation.

The 24-7 Peach Bowl loss to Alabama arguably came down to three standard plays that went unmade:

Obviously, nothing would have been assured had the Huskies made those plays. But the game would at least have been knocked off script. Instead, the 14-point underdog Huskies fell exactly the way Washington coach Chris Petersen and nearly every football pundit foresaw the game narrative.

“You could see what needed to happen,” he said. “We could not turn the ball over and give them points. We did that twice (for a field goal and a touchdown). Then we had a chance to get our hands on two turnovers. And we didn’t quite do that.

“And we missed five tackles on one play. Other than that, we played really well. Unfortunately, that’s how these games come down: A couple plays, when you’re splitting hairs, change everything.”

It’s fairly unusual to find a big-time sports event that goes almost exactly as the forecasters predicted, in style as well as result. Otherwise it’s reality TV, and few would care.

As much as Huskies fans fervently wished against the truth, Alabama indeed has likely the best defense in college football history. So no deceits, feints or tricks that made Petersen legendary at Boise State could be reasonably deployed.

Often forgotten is that non-standard plays have a lower percentage of success. Coaches typically try them only in non-fatal, or desperate, moments. But against a defense as good as Alabama’s, every play could be an exploding cigar. When a high-risk play blows up, the coach will carry the play to his professional grave, an event which tends to arrive earlier the more fans can brand a play call dumb.

The Huskies had one game plan, the only one available to foes of the Crimson Tide: Stay close with no mistakes, then get lucky.

Until Scarbrough broke free with 12 minutes remaining, Alabama’s 17-7 lead was a single big Washington play away from precariousness. The short field that would have been provided by either a Baker pick or a Wooching recovery could have been worth at least three points each.

Those if-thens are always present in football. But the fact was that Washington’s defense did enough valorous feats that meant victory was never made remote until the run by Scarbrough, the game’s offensive MVP with 180 yards on 19 carries.

“You don’t come into this game as an offense feeling great about things,” Petersen said. “You can’t put your defense in a bad place, but you still have to take chances to move the ball.”

Coach Nick Saban decided that his defense was so good he could afford to eliminate Petersen’s ability to take chances by double-teaming WR John Ross into irrelevance. Ross’s five catches for 28 yards was the decisive stat, because Ross was the one offensive talent the likes of which the Crimson Tide had not seen. The double-team risk was manageable because no one runs on Alabama’s front seven, and on passing downs, Browning would not have enough time to find alternatives to Ross.

The killer moment for the strategy was late in the first half and trailing 10-7, Browning threw an interception that was returned by LB Ryan Anderson 26 yards for a touchdown. With Ross covered, the play collapsed via rare blitz by LB Reuben Foster, who came untouched because the play called for no blocking back.

“They kinda had us on that,” Petersen said. “We free-released the (blocking) back. They called blitz and Jake was just trying to get it out of his hand. It’s either going to be incomplete or (Alabama) gets it. They had the right blitz for that play.”

Alabama does that a lot. It was the Tide’s 11th defensive touchdown of the season.

“I’ve got to learn to throw the ball away instead of making something out of nothing,” said Browning, who had his third sub-par results in the final four games of the season.

But neither Browning nor the rest of the Huskies need feel any shame over losing to the defending national champions, who have won 26 in a row, including 15 over ranked teams. A step back from Saturday shows a remarkable achievement: a 12-2 season and a Pac-12 Conference championship that made the Huskies nationally relevant for the first time in 15 years.

“I’m proud of some guys who’ve been around here for a long time, who really raised the bar,” Petersen said. “A lot of guys elevated the bar, to be what a lot of people wanted Huskies football to be all about in the past. We moved the needle forward.”

As DT Elijah Qualls put it, “We’re not anywhere we could be with just a little more detail, effort and execution. There’s no reason we shouldn’t have have won the game.”

He’s not far off. Reverse three makeable plays, and Saban’s perpetual weapons-grade pucker may have had  reason to collapse in on him to leave nothing but a straw hat.