Pete Carroll said the run game — 87 yards on 25 carries — was OK, but it was against the NFL’s worst rushing defense. The Seahawks won, but little about it inspired confidence for the playoffs. 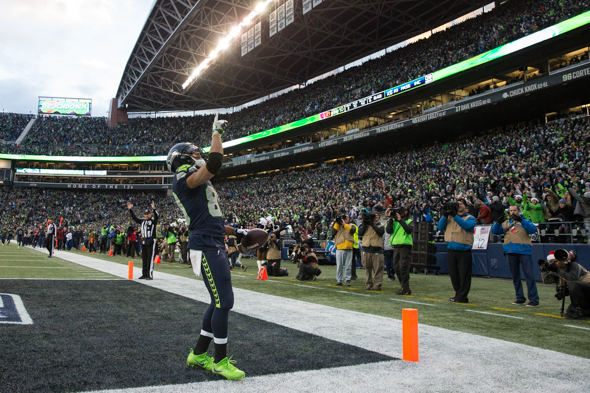 Jimmy Graham set up the go-ahead TD with a basketball-like blockout of his defender. / Drew McKenzie, Sportspress Northwest file

Fights. Ejections. A general manager and a coach fired around the game. Russell Wilson pulled with the game still in the balance. A long snapper injured, fercripesakes.

After a wild Sunday that saw the once formidable San Francisco franchise collapse in heaps around them, the Seahawks surveyed their own damage. While much lighter than the rivals, they must conclude that after mini-camp, OTAs, training camp, four exhibitions and 16 regular-season games, they still have no decent running game for the postseason.

But after a tepid 25-23 win Sunday over the 2-13 Santa Clara Tire Fires, who were 11½ point underdogs, the worry lines around this edition of the Seahawks run deep, even if Detroit is 9-7 and losers of their past three.

Naturally, the congenitally positive Pete Carroll was having none of it.

“All the worries you guys have, I ain’t got ’em,” said the Seahawks coach defiantly. “We’re going to go play football the way we know how to play.”

The way the Seahawks know how to play is to run the ball. But there is no arguing around the fact that against the worst rushing defense in the NFL, the Seahawks Sunday managed 87 yards on 25 carries, including 14 on eight by the No. 1 running back, Thomas Rawls. Two late bursts by rookie Alex Collins of 26 and 17 yards inflated the final figures.

“It was enough of a run game to play off of it in play-action,” he said, referring to forcing the defense to take the run seriously. “We got out on the edge with it. We weren’t getting good spacing early on and (assistant coach Tom Cable) really did a good job to help us.”

Perhaps that’s true. But the Seahawks again started slowly, with 10 yards of offense in the first quarter, falling behind 14-3. Against the injury-bedraggled 49ers, it wasn’t a crisis.

But the Seahawks were ahead only 25-16 halfway through the fourth quarter when Carroll decided to pull Wilson and several other starters to protect them from injury heading into the playoffs.

Normally a team that chooses to throttle back has a running game to burn the clock. But rookie backup QB Trevone Boykin, who jumped in mid-series, was forced to the air. On one drop-back, he lost control of the ball and the fumble was covered by the 49ers at the Seattle 35.

Four plays later it was 25-23 with 5:42 left. Instead of re-inserting Wilson, Carroll stuck with Boykin. Fortunately for the Seahawks, the kid rose up and hit four of six passes to pick up three first downs over 53 yards and avert a San Francisco possession with a shot at a game-winning field goal.

The Seahawks had no business fooling around so late with the 49ers, who earlier in the day fired general manager Trent Baalke, then after the game fired coach Chip Kelly. The post-Jim Harbaugh 49ers are a flaming clown car, with Sunday reaching a nadir.

“Despite my feelings for Trent and Chip, I felt the decision to change our football leadership was absolutely necessary,” owner Jed York said in a statement after the game. “The performance of this team has not lived up to my expectations or those of our fans, and that is truly disappointing.”

It wasn’t so disappointing that they didn’t have a shot at beating the Seahawks. Once it was apparent in the fourth quarter that Atlanta was going to win its game against New Orleans to secure the No. 2 NFC playoff seed, putting it out of reach of the Seahawks, Carroll made the uncomfortable decision to worry about the next game instead of the one in front of him.

“Because I’m just not making the decisions to do everything I can possibly do to win the game,” Carroll said of his decision to keep Boykin in after the turnover.  “I’m never in that frame of mind. And I’ll always challenge that thought. I hate backing off at any time, ever. I can’t remember doing it very many times, ever.

“We just thought we needed to do something to protect ourselves for next week.”

But for a tense few moments, Carroll risked putting the game in jeopardy if Boykin, who couldn’t trust the run game, made another turnover to give the Niners a short field.

“It worked out fine,” Carroll said. True, but the absence of dominance in the final game, after the 34-31 loss at home to Arizona eight days earlier, did little to inspire confidence that the matters were in order for the postseason. The Seahawks finished 22nd in the NFL in rushing at 100 yards a game.

As for Wilson, he understood why he was coming out.

“At the end of the day, you’ve got to trust coach and his opinions,” Wilson said. “He knows what he’s doing.”

That, of course, is the faith upon which what this playoff drive rests. Missing FS Earl Thomas on defense and WR Tyler Lockett on offense, and having an offensive line sometimes still on training wheels, will require the maximum from Carroll’s ability to play to strengths and hide weaknesses.

Otherwise, the Seahawks will be playing a different kind of game than the one they know how to play, at the time of the season when familiarity and order are paramount.