The Huskies started poorly in the second half and finished worse as they let a double-digit lead slip away and lost their Pac-12 opener 79-74 to Washington State. 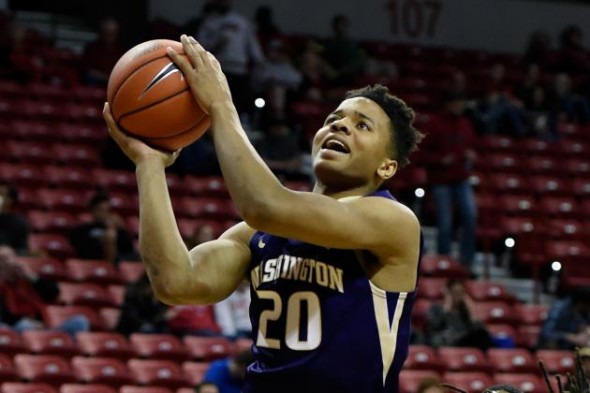 Markelle Futlz was one rebound short of a triple double, which would have been a program first. / Bleacher Report

The Huskies had a 71-67 lead in the final three minutes, but couldn’t shore up the defense.

Washington State guard Malachi Flynn found the same open slot three times, coming off a ball screen and banking in three layups, including the one that put the Cougars up for good with 0:49 to play. Down the stretch offensively, Washington (7-6, 0-1 Pac-12) came apart, missing four of their final five shots as they snapped a three-game win streak against the Cougars.

“We didn’t guard the ball screen well enough,” he said. “Down those last stretches, the ball screen defense wasn’t there. We were supposed to send Malachi the other way. The help was the other direction, and we ended up not getting there and our help wasn’t in position.”

The stretch was the second breakdown that enabled WSU (8-5, 1-0 Pac-12) to climb back into the game.

The first began after Washington held a 38-25 advantage with 4:09 to play in the first half. The Cougars closed on an 8-2 run to intermission.

UW’s cold streak continued to start the second period. Washington missed its first six shots, committed five fouls and two turnovers over the first four minutes. The Cougars went on a  14-1 run to take the lead.

Romar said the slow start to the second got to his players.

“We turned the ball over two of our first three possessions and we put our heads down,” Romar said. “It started coming out of the locker room, not taking care of the basketball.”

“One thing we’ve been saying since last year is that we’re a one-half team,” Dickerson said. “One half we bring it, the other half we struggle. Same thing today. We jumped on them first. In the second half, we struggled and you can’t play basketball like that in college.”

The Cougars capitalized on their size. Senior forward Josh Hawkinson put his 6-foot-10 frame to use, scoring 26 points and grabbing eight rebounds on the back of a 10-of-18 shooting performance. Center Conor Clifford added 14, helping Washington State finish with a 44-30 advantage in points in the paint.

As has been the case all season, Fultz was the highlight for the Huskies. The freshman was 11-of-26 from the field for 26 points, plus a career-high 11 assists and nine rebounds while committing six turnovers. Dickerson added 19 points, while David Crisp scored 11.

Washington hosts No. 21 Oregon Wednesday (6 p.m., ESPN2). The 13-2 Ducks knocked the Huskies out of the Pac-12 tournament in the first round last year.

“We’re playing a team that was picked to win the league,” Romar said of Oregon. “We certainly didn’t set ourselves up tonight to come into that game with any momentum.”