Thiel: Seahawks playoffs are all about the kids

The Seahawks were 3-1 vs. this year’s playoff field and are eight-point favorites over Detroit. But just winning isn’t enough — the many inexperienced kids playing key roles have to deliver all game. 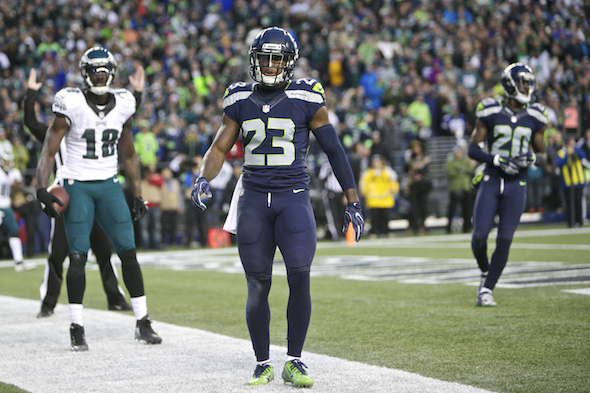 FS Steven Terrell has stepped in for Earl Thomas and will be a high priority target for the Detroit Lions Saturday. / Drew Sellers, Sportspress Northwest

Anxiety among fans as the Seahawks enter the sixth playoff season in seven years under coach Pete Carroll is palpable, and understandable. Two years ago, the Seahawks were No. 1 in rushing yardage in the NFL. This year, they are 25th. On defense, they don’t have key man FS Earl Thomas.

Carroll, naturally, does not think the flaws are seasonally fatal.

“We’ve got all we need to get this done,” Carroll said Monday morning on his weekly show on ESPN 710. “We’ve got great leadership and a lot of young guys. We’re just bringing them with us. It’s great challenge, a great exercise in putting it together.”

The Seahawks under Carroll have always believed in giving early playing time to the youngest players. It’s a smart long-term strategy to sustain high-level competitiveness over several years. This season, however, has been different.

“That’s going to be great for the future. I hope that future is going to come right now.”

Therein lies the drama of Saturday, when the Seahawks open their post-season aspiration for a third Super Bowl in four years at home against the skidding Detroit Lions (9-7), losers of three in a row.

The Seahawks not only need to win, but to do it in a fashion that demonstrates that the kids are all right.

“Our leaders continue to hold the line and bring the young guys with them,” Carroll said. “They’ve played 20 games now. Been with us a long time. It’s a process of molding them together and see how far we can take it.”

Specifically on offense, he’s talking about rookie linemen George Fant and Germain Ifedi, and second-year man Mark Glowinski. Rookie RB Alex Collins also may see a bigger role — he played 30 snaps Sunday against San Francisco, 10 more than starter Thomas Rawls, who himself has less than a full season of pro starts, thanks to injuries, and will experience his first playoff game.

On defense, Steve Terrell has stepped in for the injured Thomas, but not replaced him. No one could. Also in his first year as a starter is CB DeShawn Shead. Never under Carroll has  the Legion of Boom been so vulnerable to over-the-top pass plays.

All of those less-experienced players have delivered sporadically. The playoffs require consistency.

A bit overlooked is that the Seahawks are 3-1 against the 12-team playoff field set after Sunday’s games. They beat Miami, Atlanta and New England, and were blown out in Green Bay. It’s not as if they are over-matched; they simply haven’t sustained success, which is largely a function of two things: Injuries and inexperience/immaturity.

One example of immaturity happened late in the 25-23 win over the 49ers: Rookie DT Jarran Reed, who has become a fixture on the defensive front, was ejected for throwing a punch during a scuffle. As he reached the sideline, second-year man Frank Clark raged at him, saying “We need you!” and the two tangled briefly before being separated.

If it had been a playoff game, losing a starter to a self-inflicted wound would have caused a fecal storm. Carroll agreed with the penalty, as well as Clark calling out Reed, although perhaps not the form of the admonition.

“All but called for,” he said. “It was a terrible decision to throw a punch. A mistake. That’s all. There is no issue other than (Reed and Clark) were pissed that it happened. Things like that get in the way of our attempts to win championships. (C Justin) Britt was in the middle of all kinds of stuff, and he wasn’t gonna throw. He was composed. That’s how we need to be.

“(Clark’s confrontation) was a good statement. He jumped in and wanted to make sure (Reed) got the message. Was it well-spoken at the time? Probably not. Was it clear and measured? No. We all need to understand that.”

Emotional dust-ups aside, the Seahawks are eight-point favorites to dispatch the Lions, whose quarterback, Matthew Stafford, is recovering from torn ligaments and a dislocated joint in the middle finger of his throwing hand done a month ago.

He was 26 for 41 passing for 347 yards and two touchdowns with one interception in the Lions’ 31-24 loss at home to Green Bay Sunday that decided the NFC North title. Stafford, it would seem, is fairly healthy. But otherwise, the Lions have a worse rushing attack than Seattle’s and a respectable defense that nevertheless gave up 31 at home to the Packers.

The Lions game becomes the opportunity for the O-line to show that the 20 games together Carroll mentioned has put together something respectable.

“We took off from where we were in the second half last week (297 yards and 28 points against Arizona),” Carroll said. “Not that that half was all we’ve done well, but that was a really good turnaround. We didn’t run the ball (Sunday) early quite as well as we liked to. But we found enough to keep a rhythm. I thought they played really solid.

“We’re not pleased with it — not anywhere we like it to be. We’re still working at to keep the formula that allows Russell to be effective. He needs space for the play-action big plays to keep the passing game alive and explosive.”

In other words, the future is Saturday.