Junior WR John Ross, who had five 90-plus-yard plays in his Washington career, is expected to declare for the NFL draft. He tallied 17 touchdowns this past season. 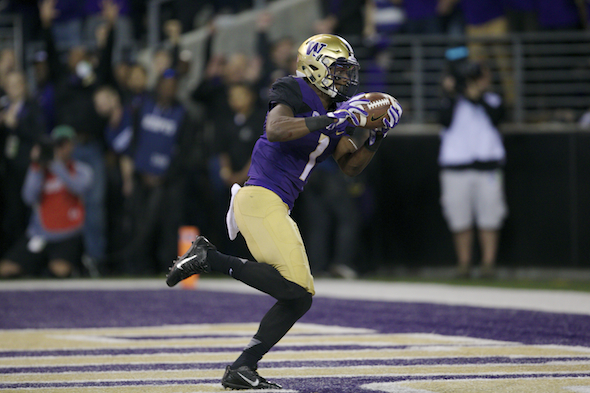 Washington junior WR John Ross, who caught 17 touchdown passes during the Huskies’ 12-2 season that ended with a loss to Alabama in the Peach Bowl Saturday, plans to skip his senior season and make himself available for the NFL draft, according to multiple media reports Monday. Ross is expected to be the first of several UW underclassmen to forego another year of eligibility.

Ross, who underwent a pair of knee surgeries that sidelined him for the entire 2015 season, had 81 receptions for 1,150 yards this season, Washington’s best since it shared the national championship with the Miami Hurricanes in 1991. His 17 receiving TDs fell one shy of the school record by Mario Bailey in 1991.

According to media reports, DBs Budda Baker and Sidney Jones and DLs Elijah Qualls and Vita Vea are also expected to announce they will enter the draft. Jan. 16 is the NFL’s deadline for undergraduates to declare.

Ross, a native of Long Beach, CA., was a semifinalist for the 2016 Biletnikoff award, presented annually to the nation’s top wide receiver. He also made first-team All-Pac-12, and is the only player in Washington history to score on five plays covering 90 yards or more. Those plays:

Ross had his best statistical game last season against California, when he piled up 208 receiving yards and three touchdowns on six receptions. In 40 career games for the Huskies, Ross caught 114 passes for 1,729 yards and 22 touchdowns. He returned four kicks for touchdowns and rushed for two more.