After big loss, Romar says Huskies in need of grit

Following an 83-61 loss to Oregon, including conceding 14 three-pointers, Washington coach Lorenzo Romar said this year’s team lacks the grit of its predecessors. 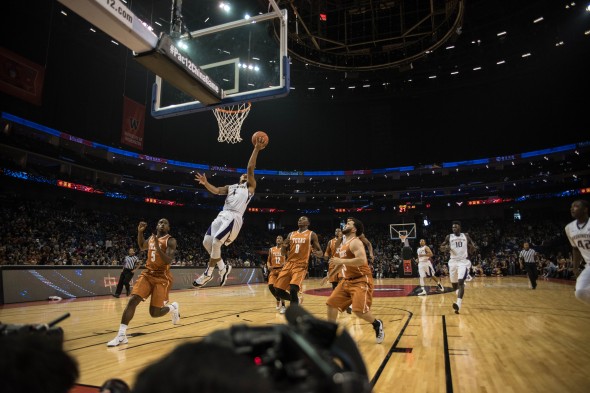 Lorenzo Romar’s Washington Huskies did not see a reversal of fortune at Hec Edmundson Pavilion Wednesday night. The No. 15 Oregon Ducks, bolstered by a career-best, 8-of-12 three-point performance from sophomore guard Tyler Dorsey, cruised to an 83-61 win.

Romar said Dorsey’s success came on the back of Washington’s failures.

“There were a couple of possessions, things that we had talked about, basics that we go over,” Romar said. “He got some open looks. In transition, we lost him a couple of times. You let a guy like Tyler Dorsey study the rim a couple of times without anybody contesting his shot, he’s going to find his rhythm.”

Washington (7-7, 0-2 Pac-12) hung close over the first 14 minutes, but failed to capitalize on early foul trouble on Oregon’s big man, Dillon Brooks, and an injury to forward Jordan Bell that limited the junior to six minutes in the first half.

As in Sunday’s loss to Washington State, the Huskies came apart late in the first half, surrendering a 14-2 run over three and a half minutes that put Oregon (14-2, 3-0 Pac-12) on top for good.

Romar did not know the source of the mental lapses.

“They’re concerning. It’s what happened against Washington State,” Romar said. “I don’t know. I can’t put my finger on (why the breakdowns keep occurring). I know we’ve taken a step back, in that regard.

“Since this group has been in college . . . they were able to walk in and see a senior, Andrew Andrews, who knew what was supposed to be done. But we haven’t experienced that success yet. Dejounte Murray, Marquese Chriss, Andrews, those were some tough kids. We would get down, and there was grit with those guys. We have to find some others that are able to step up.”

Dorsey waited until he had savaged the three-point line until scoring his first two-pointer. He finished 9-of-15 from the field for a game-high 28 points. Despite Bell’s limited minutes in the first half, he returned in the second and romped his way to an 11-rebound, 10-point double-double in 24 minutes.

Washington seeks to beat up on Oregon State University (0-2, 4-11) Saturday (noon, Pac-12 Networks)  to jump-start its conference season. Lacking the grit of departed players, a game that was once seen as a sure win looms perilous.