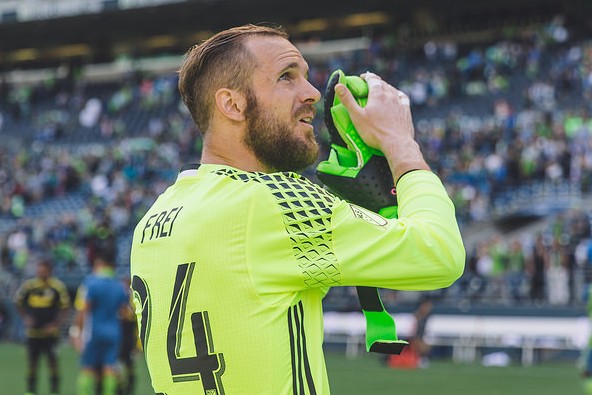 U.S. Soccer Thursday summoned four Sounders — Jordan Morris, Brad Evans, Chad Marshall and Stefan Frei — to the U.S. Men’s National Team for its January training camp in Carson, CA., a prelude to 2018 FIFA World Cup qualifiers in March. The camp, which will be conducted by new U.S. coach Bruce Arena, will include a pair of friendlies against Serbia Jan. 29 and Jamaica Feb. 3.

This will be Arena’s first training camp since he took over for the ousted Jurgen Klinsmann in November. His 32-player roster comes entirely from MLS, representing 15  clubs.

Morris, 22, has 12 caps for USMNT, including three appearances in 2018 FIFA World Cup qualifying matches. He became the first collegiate player to earn a cap since 1995 when he made his debut Nov. 18, 2014, then scored his first international goal in a friendly win over Mexico at the Alamodome April 15, 2015. Morris was the 2016 MLS Rookie of the Year.

Evans, 31, has 26 international caps and last appeared for USMNT in a 3-2 friendly win over Iceland Jan. 31 last year. He has one international goal — a stoppage-time winner at Jamaica June 7, 2013. Evans started five qualifying matches for the 2014 FIFA World Cup.

Marshall, 32, has 11 career appearances for USMNT, last appearing in a friendly against Honduras Jan. 23, 2010. The only three-time winner of the MLS Defender of the Year award, Marshall has spent the last three seasons with Seattle after a 10-year stint with the Columbus Crew.

Frei, 30, makes his USMNT debut. Frei, along with Vancouver Whitecaps FC’s Kekuta Manneh, is in the process of completing his eligibility requirements to represent the U.S. Both are clear to participate in the training camp.

The game against Serbia will be played at Qualcomm Stadium in San Diego. The U.S. will take on Jamaica in Chattanooga, TN.