The focus on CB Richard Sherman’s media boycott obscures the fact that his actions on the field and words at the podium have initiated everything. 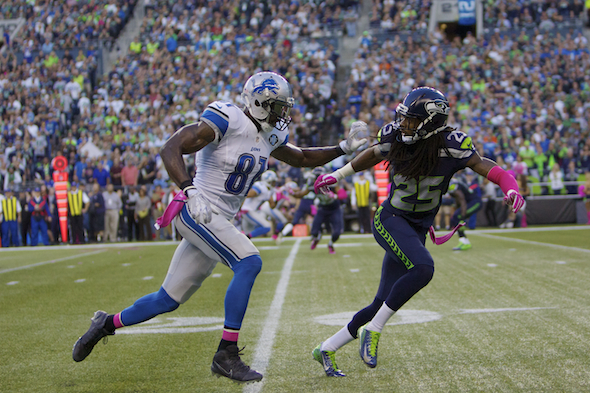 Then there was the time Bernie Little, owner of the Miss Budweiser champion boat as well as virtually the entire hydroplane circuit, came up to me and said, “If I could get my leg up that high, I’d kick you in the nuts.”

Good to see you too, Bernie.

Apparently, it was something I’d written. The long-ago greeting is one of life’s little blessings when you choose to be a sports columnist majoring in honesty (I don’t use the word truth; I’m not that smart). I don’t recall what I wrote, only the warmth it generated.

Back when Seahawks RB Marshawn Lynch was still talking to reporters, he didn’t particularly care for a line of questions from a group standing in front of him. As he rose from his locker, he smiled and started to walk away.

He turned to one reporter and said, “You got no juice.”

That was Lynch lingo for not having wide influence. He didn’t know the guy was from USA Today. Then again, it probably didn’t matter. The reporter wasn’t Kenny Mayne or Conan O’Brien or Jimmy Fallon. Lynch didn’t want to be bothered by questions that didn’t serve his ends.

I get that. Among the many variations for the NFL acronym is my favorite, “Not For Long.” The time in the intense national spotlight is minimal for most players. If they have the will and the way, they are entitled work the system as hard as the system works them.

The NFL’s collective bargaining agreement with the players union mandates weekly access to players for media covering the team, even though it is largely a suggestion rather than an enforced rule. But Lynch flouted it so steadily that in the run-up to the Phoenix Super Bowl, he was threatened with fines up to $100,000 for non-cooperation.

Ever the contrarian, Lynch turned the episode on itself by participating in the mandatory media day by responding to every question with his now-famous line, “I’m just here so I don’t get fined. ” He suddenly became the favored anti-hero of the nation, and the go-to guest for every late-night comedy show.

He is among the relative few retired players who will be able to trade on his NFL legacy he hand-crafted. He also had the brains and guts to leave at the top, tweeting out his retirement during the fourth quarter of the Super Bowl with a photo of his cleats hanging from a wire.

Brilliant. His last word was wordless.

I mention these episodes by way of helping explain why Richard Sherman’s media relations have hit a pothole.

First, most relationships between public figures and journalists will become at least uncomfortable and often adversarial because when things go wrong, journalists are obligated to ask why, and to seek an independent accounting. Done professionally and not personally, the inevitable friction is survivable.

I recall that Little, after a little more grumbling, kept answering questions when he could have walked away. Or swung his leg.

Second, the public figure needs to calculate consequences to the greater task if a confrontation develops. In the case of team sports, that means doing no damage to team ambitions. As Seahawks coach Pete Carroll puts it, “protect the team.”

A year ago Sunday, Lynch surprised Carroll and the entire team when he declined to board the bus to the airport for the wild-card playoff game in Minneapolis.

Earlier that day, Carroll said on a radio show that Lynch “will play” for the first time since Nov. 15 after rehabbing from abdominal surgery. Lynch was said to have had a strong week of practice.

What exactly happened to change things remains conjecture. But Carroll, who had an often tense relationship with Lynch, was embarrassed publicly, which is never a good thing for any boss, even one as tolerant as Carroll.

In brutally cold conditions, the Seahawks prevailed over the Vikings, 10-9, thanks to a short field goal that was missed in the final minute. Had the Seahawks lost, the unanticipated absence of Lynch would have lingered far longer.

A somewhat similar circumstance now occurs with Sherman. In hindsight, Sherman made three mistakes that challenged the dictum to protect the team.

In the Oct. 16 game with Atlanta, Falcons WR Julio Jones caught a touchdown pass over the defense after a communications breakdown between Sherman and SS Kelcie McCray, the replacement for injured Kam Chancellor. Sherman went into a helmet-slamming rant on the sidelines directed at defensive coordinator Kris Richard. Teammates had to help calm down an enraged Sherman.

The pass would be the first of three touchdown passes in 11 minutes of the third quarter that flipped 17-3 halftime lead into a 24-17 deficit into the fourth quarter. The secondary seemed temporarily to have lost its balance. Again, the Seahawks won, deflecting the pressure.

The second mistake came in the Dec. 24 game with the Rams, when Sherman confronted Carroll and offensive coordinator Darrell Bevell about playcalling from first-and-goal.  Again, the Seahawks won, helping defuse things.

Crossing the offense/defense separation seemed like insubordination and prompted a one-on-one meeting the following Monday between Carroll and Sherman. Carroll said any punishment that may have arisen was internal.

The third mistake was when Sherman, in light of some criticism of his actions, took a shot at fans. At what turned into his last weekly podium talk Wednesday at the VMAC, Sherman said, “The public just needs an opinion, a criticism. They don’t understand. That’s why most people can’t even get to this point of success. Most people live their lives with a foot on the brake, hoping not to run into people.”

None of these episodes were instigated by media, but by Sherman. But a week ago, he described the weekly access to him “a privilege.” Maybe. Personally, I looked at it like a professional courtesy that has been revoked as of Tuesday, when he said was boycotting some in local media.

A lost courtesy is hardly a thing. What is a thing is whether Sherman’s actions didn’t protect the team.

I asked Carroll Thursday to what extent he cared about Sherman’s media relations. Here’s what he said:

“He’s got a mind of his own and he’s got a real thought about it. Whenever you’re trying to protect the integrity of what you say, and as you get represented, and that’s an important thing. I know Richard is tuned into that. He’s very bright and I support Richard always. I have supported him for a long time and will continue to.

“I think he’s a brilliant kid and it doesn’t mean that you guys are always going to see eye to eye on stuff.”

It’s what Carroll had to say.

And given that Sherman has had disputes with Carroll, Bevell, Richard and teammates Doug Baldwin, Michael Bennett, Kam Chancellor and many other people important to him back to his youth — see this story by si.com’s Robert Klemko on Sherman’s history of confrontation — it could be said that we reporters are keeping good company.

As to its impacts on the team, there would seem to be only one good answer — keep winning.