Behind RB Thomas Rawls, the Seahawks broke open a tight game with a pair of touchdowns in the fourth quarter and rolled over the Detroit Lions 26-6 Saturday night at the Clink. 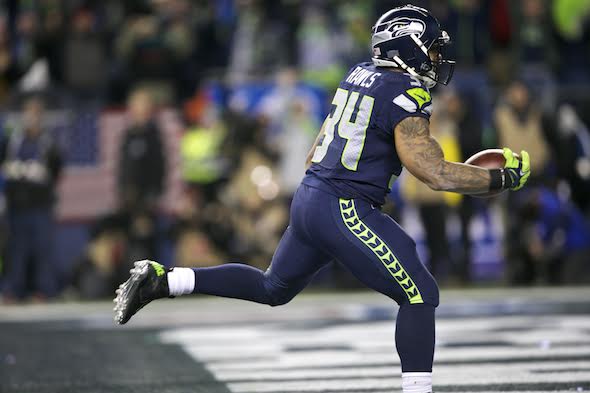 Thomas Rawls busts through for a touchdown in Seattle’s 26-6 win over the Detroit Lions Saturday night. / Drew Sellers, Sportspress Northwest

RB Thomas Rawls tore through Detroit for 161 rushing yards and WR Paul Richardson made the catch of the year as the Seahawks wore down the Lions 26-6 in an NFC wild card game Saturday night at CenturyLink field (box). With its 10th consecutive home playoff win, Seattle advances to the divisional round of the playoffs Saturday afternoon against the Atlanta Falcons in the Georgia Dome.

The Lions didn’t acquiesce easily (they trailed 10-3 at halftime and 10-6 after three quarters), but they had zero answer for Rawls, who averaged six yards per carry and broke the playoff single-game mark of 157 yards by Marshawn Lynch against Green Bay Jan. 18, 2015. Rawls also scored on a four-yard run while Richardson tallied on a two-yard, almost insane, one-handed catch.

Richardson’s amazing snatch staked Seattle to a 7-0 lead in the second quarter. The Seahawks used Rawls almost exclusively throughout the first half. Rawls had 107 rushing yards, the first back in Seattle history to surpass the 100-yard mark in the first half of a postseason game.

After the second of Mike Prater’s two 50-plus-yard field goals cur the lead to four, the Seahawks struck for two touchdowns and a field goal in the fourth quarter to send the Lions to their ninth consecutive postseason defeat, an NFL record.

Seattle surrendered its fewest points in a postseason game. The Seahawks ceded seven to Denver in a wild card game in 1983 and seven to the Raiders in a 1984 wild card game.

Ahead 13-6 lead with 11 minutes left, the Seahawks moved from their 18-yard line to the 35. On first down, Wilson looped a long ball to the far sideline to WR Doug Baldwin, who somehow got both feet down for  42-yard gain to the Detroit 23. That set up a four-yard touchdown run by Rawls.

Rawls carried 27 times and played a huge role in the first scoring drive when he had runs of 12, 9, 4, 4, 4, 10, 4 and 6 yards, setting up Wilson’s TD pass to Richardson. Rawls became the first NFL player to crack the century mark in the first half of a playoff game since San Francisco’s Colin Kaepernick in 2013. Rawls had a long run of 32 yards.

Wilson completed 23 of 30 passes for 224 yards and two touchdowns without an interception and finished with a passer rating of 119.3. Wilson improved to 8-3 with 18 TD passes in 11 postseason starts. Wilson is 5-0 in his postseason career at CenturyLink Field and 15-3 in home games played in December and January.

Baldwin caught 11 passes for 104 yards and fell one shy of the Seahawks’ playoff-game record by Darrell Jackson against St. Louis in 2005.

Richardson had three catches for 48 yards, none more impressive than his one-handed grab for a TD. On 4th-and-goal at the one, Detroit DB Tavon Wilson interfered with Richardson on an end-zone fade route and drew a flag. But Richardson with his right hand grabbed Wilson’s face mask while reaching back and low with his left hand to grab the ball. No call was made on Richardson. He also had a one-handed catch on a fourth-quarter play that helped set up Seattle’s final TD.

DE Cliff Avril recorded two sacks and DE Michael Bennett one. The Seahawks also had four tackles for loss as they limited the Lions to 231 yards, only 49 rushing, 34 by RB Zach Zenner.

In his two previous career playoff games, QB Matt Stafford had thrown for more than 300 yards. But the Seahawks contained him to 205 yards and a 75.7 passer rating. Stafford, nursing an injury on the middle finger of his throwing hand, averaged only 6.4 yards per completion. Stafford orchestrated eight fourth-quarter comeback wins in 2016, but the Lions ended the season with four consecutive losses.

“You know what? I’m feeling so good. The big boys up front really did it for us. I didn’t know that was a record (for playoff yards), but we kept the chains moving. We wanted to end it like this, running the football.” — Rawls

“We bought ourselves another game. That’s all we did.” — Avri.

“They brought me in here to make plays and that’s what I’m trying to do. I don’t like one-handed catches, but that’s the way it worked out.” — Richardson

“I wasn’t where I was supposed to be. I took a touchdown from him and I told him I was sorry.” — Baldwin, who snagged a TD pass intended for Jermaine Kearse

“I thought it was coming to me, but I guess not.” — Kearse

The Seahawks advanced to the divisional round of the playoffs for the sixth time in Carroll’s seven seasons in Seattle . . . The Seahawks improved to 16-14 in postseason play, including 12-2 at home . . . Seattle is 23-4-1 in prime-time games, including playoffs, since 2010 . . . Seattle has won five of its past six against Detroit and leads the all-time series 9-5 . . . Detroit hasn’t won a playoff game since Jan. 5, 1992, nor has it won a road playoff game since Dec. 22, 1957 at San Francisco (ex-UW star Hugh McElhenny caught a TD pass for the 49ers in that game).