Thiel: Seahawks handle business, are on the hunt

Yes, it was the sixth-seeded Lions. But the Seahawks trusted one another to do what they spent a year working toward — being successful without Marshawn Lynch. Saturday, they took a step. 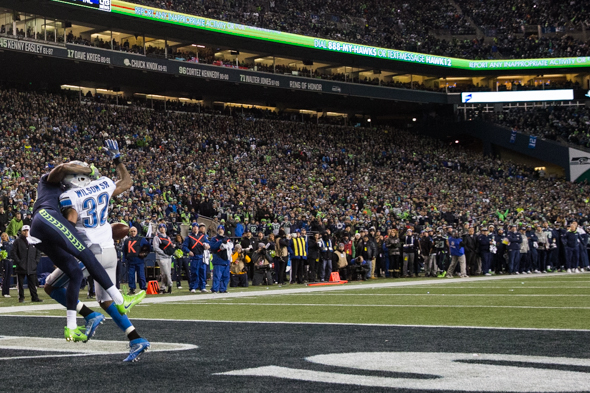 The right hand of WR Paul Richardson hooks the face mask of FS Tavon Wilson, as Richardson’s left hand reaches around  for the ball to score the Seahawks’ first touchdown Saturday at the Clink. / Drew McKenzie, Sportspress Northwest

After a playoff club-record 161 yards and 27 carries, RB Thomas Rawls did not need to do anything more for the Seahawks Saturday night. But after the game, he provided the clearest take on the biggest result of the 26-6 playoff win over the Detroit Lions.

“We handling our business,” he said. “We on the hunt.”

After 17 weeks of mostly goodness and too-frequent badness, the Seahawks patiently worked the playbook and the opponent while making few errors and no turnovers. It felt like a latter-career Muhammad Ali fight. Not as quick or as bold, but more shrewd and calculating, happy with a 15-round decision knowing that no advantage was foolishly wasted swinging for a knockout.

As a consequence, the title is still within sight. The Seahawks play in Atlanta Saturday a very good Falcons team that nearly won in Seattle in October. The Falcons are much better than Lions.

And the Seahawks are finally better than they were in December. Handling their business. On the hunt.

They aren’t the 2013 Seahawks that won the Super Bowl. But they closer to the being the team that beat the Patriots in New England in mid-November. That’s what matters.

Did the Seahawks get well? They got better.

After another slow first quarter, Carroll’s point manifested with the first possession of second quarter. Starting at their own 40, the Seahawks had nine consecutive running plays, seven by Rawls, and one each by FB Marcel Reece and RB Alex Collins.

The significance wasn’t just the 46 yards they picked up. It was that the Seahawks coaches  trusted the line and all blockers to do their jobs.

“It’s the best feeling in a while,” said a beaming Germain Ifedi, the criticized rookie right guard whom some are calling a bust. “When we’re doing it right, it’s hard to stop us.

“Once we got going, we knew (offensive coordinator Darrell Bevell) was going to keep hitching the wagons to us. We’re still trying to earn that trust. We keep getting chances, we’ll earn that trust.”

The drive ended with the game’s first score, a fourth-and-goal pass from the 2-yard line, in which WR Paul Richardson leaped into the NFL’s video treasure vault with a one-handed touchdown catch. He also landed in the video collection of bad officiating when his grab of his defender’s face mask went unpenalized.

But the spectacle of that play obscures the significance of the eight previous minutes for Seattle’s immediate future. They executed the gospel according to Saint Pete:

Thou shalt carry the sacred skin until thy swords run with the blood of the infidels.

“Bev was just feeling it,” Carroll said. “He was playing off the way we were coming off the football. He loves to run the football. We’ve been doing it for years around here. He just latched on to it.”

For years, they had been doing it with Marshawn Lynch. In his retirement absence, the Seahawks have spent a year and countless resources trying to make up for how good Lynch’s extraordinary power, cleverness and durability made everyone else look.

They’re not there yet. But he no longer has the single-game playoff record for yards. That belongs to Rawls, who worked through a debilitating series of injuries to deliver the best game of his two seasons in Seattle.

“It means a lot,” said Rawls of breaking Lynch’s mark. “I looked up to him. Still do. Still communicate with him. I reminisce back when I was younger, watching him. Man . . . hopefully, one day!

The ability to deal and endure pain in the running back spot in the NFL is the game’s crucible. Rawls and Lynch share the capacity, right out there at the edge of human endurance.

“You have to have a whole different level of toughness,” Rawls said. “Sometimes you have to leave your mind and your body. Nothing matters but the play. Every play, just keep pounding. Then, I think it is, who can last the longest? Can you truly endure that much pain? Everybody out there is hurting.

Saturday night, Rawls was the last one. Which is not to say that the Seahawks defense did not do something similar, denying an opponent a touchdown for the first time in the club’s playoff history.

QB Russell Wilson, running without his knee brace for the first time in almost three months — “I think I picked up a couple of tenths (of speed),” he said, smiling — mastered the short-pass game until he suckered the Lions into failure on a 42-yard, fourth-quarter bomb to Doug Baldwin.

But the night belonged to Rawls and his blockers, which even included Wilson, who ran past him to throw a downfield block on a 32-yard run.

Yes, it was the home field. Yes, the Seahawks were a 7.5-point favorite; yes, the Lions season ended with four losses in a row and the longest playoff losing streak (nine games) in NFL history.

But the Seahawks got better. They handled their business. They are on the hunt.