RB Thomas Rawls and WR Doug Baldwin worked their ways onto historic lists during the Seahawks’ 26-6 playoff victory over the Detroit Lions Saturday night at the Clink. 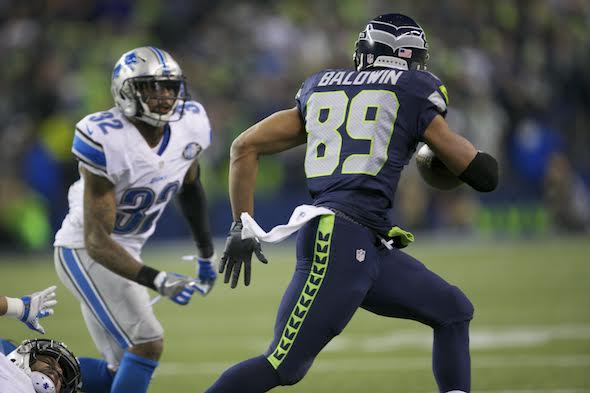 One of the more intriguing nuggets to emerge from Seattle’s 26-6 wild-card victory over the Detroit Lions Saturday night came courtesy of the Elias Sports Bureau, which noted that RB Thomas Rawls and WR Doug Baldwin became the third pair of teammates to have at least 150 yards rushing and 10 or more receptions in a postseason game.

Prior to Saturday, no Seattle receiver caught more than six passes in a playoff game in which the Seahawks had a 100-yard rusher, much less a 150-yard rusher (Baldwin caught six twice).

Rawls and Baldwin are also the fourth tandem in Seahawks history to rush for 100-plus yards and log 100-plus receiving yards in the same playoff game, of which Seattle has played 30 (16-14 record).

Baldwin’s 11 catches pushed his career postseason total to 50, 11 more than runner-up Darrell Jackson (2003-06). His 104 receiving yards jacked his playoff total to 622, extending his franchise record. Baldwin has caught at least one TD in 11 consecutive playoff games, also a franchise record.

His most remarkable play Saturday set no records, but will forever hold a prominent place in Seattle’s video highlight vault as the “butt catch.” The Seahawks faced third-and-9 at the Detroit 24. QB Russell Wilson threw to Baldwin, but delivered it too far inside. It looked initially as if Baldwin dropped the ball, and the pass was ruled incomplete. But Baldwin urged coach Pete Carroll to challenge the ruling. He did.

Replays showed the ball slipped through Baldwin’s hands as he went to the ground, but also showed that Baldwin pinned it against his rear end. It never reached the turf. The ruling was reversed, the Seahawks extended the drive, and two plays later Baldwin caught a 13-yard TD pass that was intended for WR Jermaine Kearse.

“He makes the tough catches,” said CB Richard Sherman. “He even catches with his butt sometimes. There’s nothing he can’t do.”

Wilson targeted Baldwin 12 times and he snagged 11, including a 42-yard, tiptoe-down-the sidelines catch that help set up Rawls for a four-yard touchdown run in the fourth quarter.

Targets have been tracked since 1992. In all NFL postseason games since then, only two receivers had a higher catch percentage (minimum 12 targets) than the 91.7 Baldwin posted Saturday night:

“He is going to catch most anything you throw at him,” said Carroll. “He’s the quickest guy I’ve ever coached. I’ve never seen anybody that can change direction so abruptly with such body control, both at the line of scrimmage and downfield. He’s got phenomenal quickness.”

“He’s just an incredible route runner,” added Sherman. “He’s probably one of the most depth route runners out there. He runs them at the proper depth and he makes the plays that are there.”

Rawls had an historic game in his own right, not only for breaking Lynch’s single-game playoff rushing mark (157 yards vs. Green Bay in 2015). Rawls carried 27 times and averaged 5.96 yards per run, the sixth-highest average since the 1970 NFL-AFL merger among backs who toted 25-plus times and finished with at least 160 yards.

“I’m thrilled,” said Carroll. “That’s the guy we fell in love with last year and have not seen a lot of since. It just hasn’t happened for a lot of reasons, but who cares? It doesn’t matter. Now it’s time to keep going, and this was a great step in that direction.”

When Seattle faced Atlanta Oct. 16, Rawls did not play. The Seahawks rushed for 72 yards, 64 by Christine Michael, now with Green Bay.