Huskies finish No. 4 in AP and coaches polls

Washington finished No. 4 in both the Associated Press and coaches polls released Tuesday, but were leapfrogged in the final rankings by the USC Trojans, who ended at No. 3.. 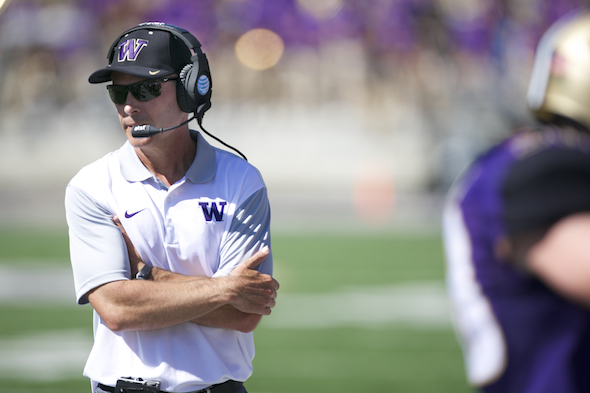 The University of Washington finished No. 4 in the final Associated Press and coaches college football polls released Tuesday, but were leapfrogged in both by the USC Trojans, who finished third behind No. 1 and new national champion Clemson, which defeated No. 2 Alabama 35-31 Monday night in the national championship game in Tampa.

The Huskies, who lost to the Crimson Tide in the national semifinals Dec. 31 in the Georgia Dome, received 1,277 votes in the Associated Press poll. Clemson collected 1,500, Alabama 1,440 and USC 1,292. The Trojans, who defeated Penn State in the Rose Bowl and handed Washington (12-2) its only loss of the regular season, jumped from No. 7 in the final regular-season poll.

Washington’s No. 4 final AP ranking is its highest since the Huskies ended at No. 3 following the 2000 season.

The coaches poll also had Clemson at No. 1, Alabama at No. 2, USC at No. 3 and Washington at No. 4, which was where the Huskies were ranked heading into the national semifinals. USC moved up four spots from No. 7. The Trojans beat the Huskies at Husky Stadium 26-13.

The coaches placed Colorado at No. 13, Stanford at No. 15 and Utah at No. 17. The coaches ranked all FBS schools, placing Washington State No. 38.

The Huskies agaiin have an easy non-conference slate with a road game at Rutgers and home games against Montana and Fresno State. The Huskies won’t play USC next year and draw Utah and Washington State at home.