At 31, Marcel Reece was thrilled to experience his first playoff game Saturday, helping the Seahawks to 177 rushing yards as the closest thing yet to former ace fullback Michael Robinson. 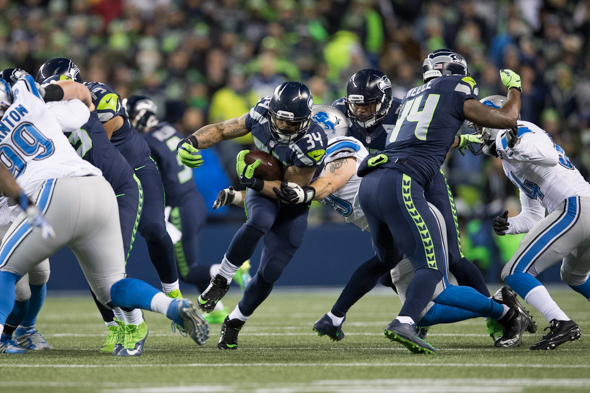 Thomas Rawls found some space Saturday against the Lions, thanks in part to FB Marcel Reece (44). / Drew McKenzie, Sportspress Northwest

Listening to Seahawks FB Marcel Reece talk about his Saturday at the Clink, the experience was akin to that of a six-year-old receiving a pony for Christmas. The joy and gratitude set off tsunami warning signals.

“Reality was much better than my expectations,” Reece said of the 26-6 wild-card playoff triumph over Detroit. “Yes, it is just another football game. But it was the most exciting football game I’ve probably been a part of. It was a combination of my first playoff, the playoff win, the team playing lights out and the crowd roaring . . .

“After the game on the field, (QB Russell Wilson) gave me the game ball.”

On the birthday of Reece’s mother, no less.

“I was thinking about giving the football to my mom,” Reece said. “But it’s going in the man cave.”

The reaction of a 31-year-old who had one carry for zero yards and one catch for five yards may seem a tad overwrought. But as a native of the small town of Hesperia, in California’s Mojave Desert, Reece may have a deeper notion than most of the concept of oasis.

Until his free-agent signing by the Seahawks Dec. 6, Reece spent his eight-year pro career in Oakland, where the Raiders not only didn’t make the playoffs, they didn’t have a winning season, and went through six head coaches. Before that, he spent 2006 (5-7) and 2007 (4-9) at the University of Washington under coach Tyrone Willingham, graduating just ahead of the 0-12 debacle. Before that, he was in two junior colleges in two years.

So yes, Saturday for Reece was a big freakin’ deal.

“After that experience, I never want to not go to the playoffs again,” he said. Good as the day was, the month in Seattle has been better.

“I’ve been on nine different teams, and this team is different than any other I’ve been a part of,” he said. “The locker room changes every year in the NFL, that’s just the nature of the business. This is an amazing locker room. It’s hard to put into words.

“A guy like me — four-time Pro Bowler, nine-year veteran, 31 years old — comes to a defense-dominant team late in the year . . . you don’t know what to expect. It’s a great feeling to be accepted.”

Acceptance turned to celebration Saturday because the Seahawks gained 177 yards rushing, 161 by RB Thomas Rawls. Part of the reason was heavy use of the I-formation featuring lead blocker Reece.

“Be the big brother and do the dirty work — that’s what it’s all about,” he said, still smiling. Seahawks fans should be smiling too. The offense looked a lot more like the glory days when RB Marshawn Lynch, in the I-formation, was preceded through the offensive line by FB Michael Robinson, an under-appreciated but valuable asset on the Super Bowl-winning team.

“It’s kind of the same things we’d get out of Mike Rob when he was here,” said line coach Tom Cable. “It makes the game normal for us — that’s what we’ve been chasing.

“I think they’re different players. Marcel is much better at the perimeter, catching the ball and running with the ball. Understanding the system? Absolutely, probably equals. Mike might be a little more bullish at contact.”

Coach Pete Carroll said Reece is a more complete player than most of the Seahawks fullbacks between Robinson and Reece, a 6-1, 235-pounder.

“It’s the spread of offense, you can do a little bit of everything if you have all of the tools,” he said. “Marcel allows you to run him a couple different (personnel groupings). We used three different personnels with him in the game.

“He’s very versatile and very smart. We’re not restricted in any way with the kinds of things we like to do when he’s playing for us.”

Reece sat out the first three weeks of the season while suspended for use of performance enhancing drugs. Upon his return, Reece injured a knee in a game in late September and was released by the Raiders.

He was summoned for workouts by the Patriots, Bengals and Jets, and either he wasn’t healthy or he didn’t like the set-up. But with the Seahawks burning through running backs, a healthier Reece impressed in early December.

He already had someone on the inside with Cable, who was one of his head coaches in Oakland, when Reece, under orders from owner Al Davis, was switched from wide receiver to running back.

“As a former wide receiver, he wasn’t afraid of it,” Cable said. “He didn’t really have a fear factor. That’s really unique, that transition. You can take a D-lineman to an O-lineman, or tight end, or whatever it is. But usually, a wide receiver to fullback, you’d say you’re crazy. But it worked. He’s been really good for awhile.”

He was really good Saturday. The trick will be to sustain it a second time Saturday in Atlanta (1:35 p.m., FOX), where there will be no ponies at Christmas. Just much dirty work for the big brother.