The Seahawks’ 2013 defeat in the final moments of a playoff game against the Falcons in Atlanta gets revisited this week. It was so excruciating, it left a mark on Carroll. 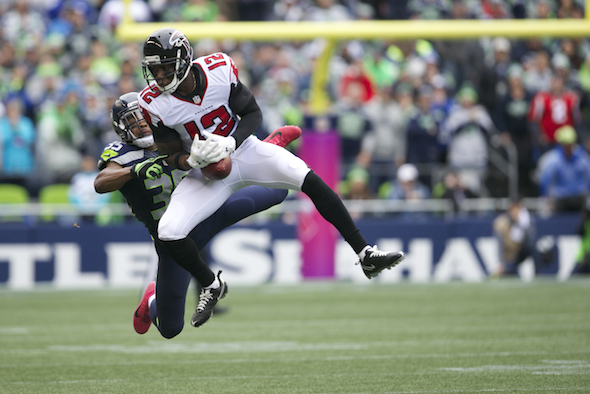 In the October match between the Falcons and Seahawks, Mohamed Sanu got the better of Deshawn Shead. / Drew Sellers, Sportspress Northwest

Opinions are many regarding what constitutes an excruciating defeat: An upset blowout. A last-second buzzer-beater. A persistent pursuit that never quite gets there.

However it is described, it will be much like the old definition of pornography: You know it when you see it.

I saw my paradigm Jan. 14, 2013, at the Georgia Dome: The Seahawks had made one of the great rallies in recent NFL history, coming from down 20-0 at halftime and 27-7 earlier in the fourth quarter to take a 28-27 lead over the Atlanta Falcons with 31 seconds left, then lost the playoff game on a field goal with 13 seconds remaining to end the season.

It was so excruciating that the sequence may be burned into Seahawks coach Pete Carroll’s retinas, popping into view when an impertinent reporter calls it to attention. Sure, it’s a crowded space with the New England Super Bowl loss and a few others. But there was something about the rally from a deep deficit, and then a kill applied to the strength of the team, that was a jaw-dropper capable of denting a sidewalk.

Ah, but it does. At least as far as the narrative. Saturday, the same teams meet in the same place at the same level of the playoffs. Not only that, but they are meeting only because the Seahawks experienced a similar lapse in the Dec. 24 home game against Arizona.

Down 31-18 with 4:10 to go, the Seahawks rallied to tie at 31 with one minute left on a five-yard touchdown reception by WR Paul Richardson. Somehow, the Cardinals managed to get off eight plays in those final 60 seconds to cover 50 yards, whereupon Chandler Catanzaro kicked a field goal at 00:00 to win win 34-31.

Granted, a defensive stop in this case would not have produced a win, but the late recovery of the offense as well as the home field had to make the Seahawks like their chances in OT.

Instead, the loss dropped the favored Seahawks into the No. 3 spot in the NFC playoff seedings and vaulted the Falcons to No. 2. The order remained through the final week of the regular season, meaning the Falcons received a bye last week as well as the home field Saturday.

Had the Seattle defense held, Saturday it would be rested and accompanied by the Clink’s audio riot to help deal with the Falcons’ nuclear offense.

Late defensive collapses are hardly unknown to the Seahawks or any NFL club. But given the accomplishments and the pride of the Seahawks defense in the Carroll era, these kinds of late letdowns are nearly as inexplicable as they are excruciating.

Carroll was asked to try to explain.

“It’s really who executes at the time,” he said. “Sometimes you see coaches go after it, sometimes you see they lay off. They try different ways to get it done. I’ve gone through all of them and been whipped in some of them.

“It’s that moment — who makes things happen better in the last couple seconds. Sometimes you do well; others, you don’t.”

Under Carroll, the Seahawks’ defense on final possessions has had many more goal-line stands and red-zone denials than failures. But Carroll would agree that when they don’t happen, the scar becomes visible from down the block.

“It’s not like I go over this time and time again, but I can tell you exactly what happened if you want,” Carroll said, with a sardonic grin, about the defeat by the Falcons. “The 31-second deal was two snaps. We went after them and they converted. We didn’t quite execute the sink in the zone that we needed to sink (QB Matt Ryan completed a pass to QB Harry Douglas for 22 yards over CB Brandon Browner to the 50), and they threw the ball over our heads and got the ball to the sideline to stop the clock.

“Came back and hit the tight end (Ryan found Tony Gonzalez for 19 yards in front of FS Earl Thomas).” Field goal. Season over.

“You’re trying to get me to say I screwed up there,” he said. “I didn’t like the way we did that, and I was responsible for it. So, yeah. My bad.”

But thanks perhaps to the passage of four years and a thousand subsequent dramas, Carroll’s tone was light-hearted.