MLS unveiled its full 2017 regular-season schedule Thursday. The defending champion Sounders open with a pair on the road before playing at home March 19. 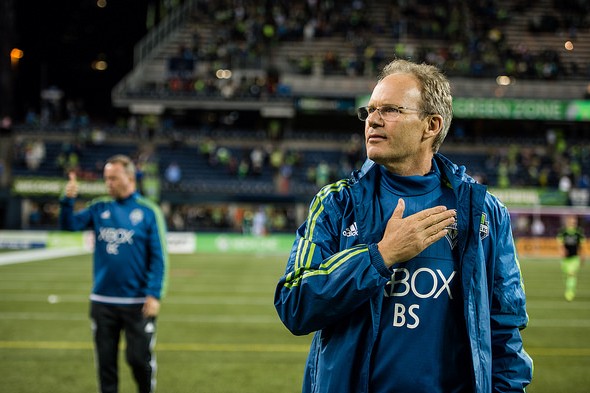 Major League Soccer Thursday released its full 2017 regular-season schedule, which calls for each of its 22 clubs to play 34 matches beginning March 4 and concluding Oct. 22. The league champion Sounders will play their home opener March 19 against the New York Red Bulls after playing a pair on the road, March 4 at Houston and March 11 at Montreal.

Seattle will play 12 games on national television (ESPN or FOX), beginning with the home opener against the Red Bulls.

The Sounders will host three of their six Cascadia Cup matches against Portland and Vancouver and play the LA Galaxy three times on national TV, including a Sunday night clash Sept. 10.

Eight of Seattle’s final nine matches will be against Western Conference opponents, culminating with a pair of home matches to close out the season against 2016 postseason foes FC Dallas (Oct. 15) and Colorado (Oct. 22).

Additional schedule highlights include a rematch of the 2016 MLS Cup final between the Sounders and Toronto FC May 6 at CenturyLink Field. Seattle will also play both MLS expansion teams, Atlanta (Eastern Conference) and Minnesota (Western Conference).

Seattle hosts Atlanta March 31 and faces Minnesota twice in a 16-day span in August, beginning with a road contest Aug. 5.

A complete listing of Sounders FC’s 2017 regional broadcast details will be announced later.

As a prelude to the regular season, the Sounders will play a friendly against Portland Feb. 4 in Tucson, AZ. Seattle will also play in the Carolina Challenge Cup in Charleston, SC., against Charleston Battery (Feb. 18), Atlanta United (Feb. 22) and Columbus Crew (Feb. 25).