Since the first meeting in October, several key young players among the Seahawks and Falcons have grown up fast. It helps to think of the NFL narrative in dog years. 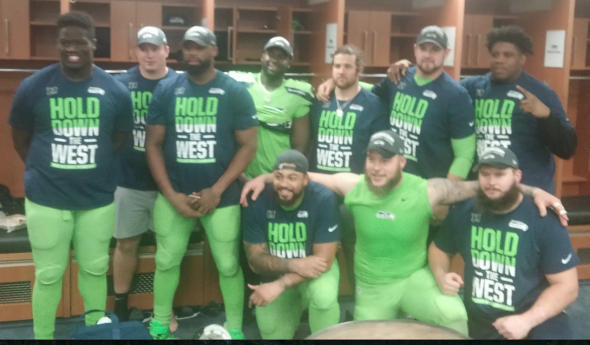 ATLANTA — Dog years. That’s the metric for how to measure maturity in NFL teams. At least, that’s the scientific theory that I’m sticking with until someone repeals and replaces it.

By that measure, a ratio of seven canine years to one for humans, the Seahawks’ offensive line, heading into its 18th game Saturday at the Georgia Dome against the Falcons, is approaching its 2½-year anniversary. Sorta.

At left tackle, George Fant is an outlier. He made the first football start of his life Oct. 30, so he remains in need of puppy training. I’ll leave it to you to smack his snout with a rolled-up newspaper.

But the fact that the Seahawks Saturday rushed for 177 yards in the playoff win over Detroit suggests plausibility to the theory that, in pro football, kids can grow up fast in a single year. Granted, the result was against a weak Lions defense. But in the game prior to the playoffs, the even weaker 49ers defense held Seattle to 87 yards in 25 carries.

The Seahawks were waaay out there with three first-year line starters –LG Mark Glowinski and RG Germain Ifedi,  before Fant made it three — for a team that has Super Bowl ambitions. Appropriately, the group was punished formally this week by the analytics site Pro Football Focus, which ranked Seattle last among O-line units for the 2016 regular season.

But as coaches like to say, that was then, this is now.

“In truth, what’s really different from (the Detroit game) than the whole year, we just did it better and did it with more consistency,” said O-line coach Tom Cable. “We were right more often. How we’ve looked, what we ran — absolutely nothing different than fall camp, day one.

“We’re just trying to find us. We have a system. We’ll keep searching for it.”

Cable was also cheered by the conversion in the second half of seven third downs in nine tries. That efficiency echoed a 28-point second half Dec. 24 against Arizona that included eight conversions in 12 chances. So lately, an argument for at least periodic competence has been made.

In the regular-season meeting between the teams, Oct. 16 at the Clink, the system was still missing. The Seahawks ran for 72 yards in 27 carries, 64 from RB Christine Michael, subsequently cut. Injured RB Thomas Rawls was out and QB Russell Wilson was gimpy from ankle and knee sprains. But the Seahawks still won, 26-24.

But just as the Seahawks’ kidlets have aged abruptly, the same can be said of the Falcons’ defense. A similarly young group whose collective resume is less formidable than Atlanta’s second-ranked offense — led by QB Matt Ryan, a leading candidate for the league’s most valuable player award — a late uptick is visible.

The defense starts three rookies and three second-year players (minus former Huskies star Desmond Trufant, injured and out for the season), and 18 of the 25 listed on the depth chart have never played a playoff game, including eight of the starting 11.

But if the youngsters have any apprehensions about playing the more experienced Seahawks Saturday, it was not detectable by Dwight Freeney, the Falcons’ 14-year defensive tackle and former All-Pro.

“I haven’t had to pull guys aside this week,” Freeney, 36, told the Atlanta Journal-Constitution this week. “I haven’t seen any signs that said to me, ‘Panic time.'”

It’s true the other three opponents were, like the Saints, woebegones (Rams, 49ers, Panthers), but it was plain to QB Russell Wilson that the Atlanta defense has improved since the first meeting.

“Those guys don’t look like rookies, or second-year players,” he said. “They’re going to be a great football team for a long time.”

The club so admired Seattle’s ability to sustain quality — Wilson is the only offensive starter who remains from the 2012 team of his rookie year — that two years ago, it hired one of Pete Carroll’s top assistants, Dan Quinn, to be head coach.

He has pushed them to an 11-5 record and the No. 2 seed in the NFC playoffs, which provided a bye last week for Quinn to load up his players on Seahawks arcana (he probably spent five minutes on prepping for the Lions).

An extra week doesn’t sound like much, even compared to a dog year. But in the NFL, where time is compressed like almost nowhere else, boys can become men and little edges can mean much.