The need for help on the offensive line is obvious. But the way the Falcons tore apart the Seahawks defense suggests that it’s time to refresh the Legion of Boom. 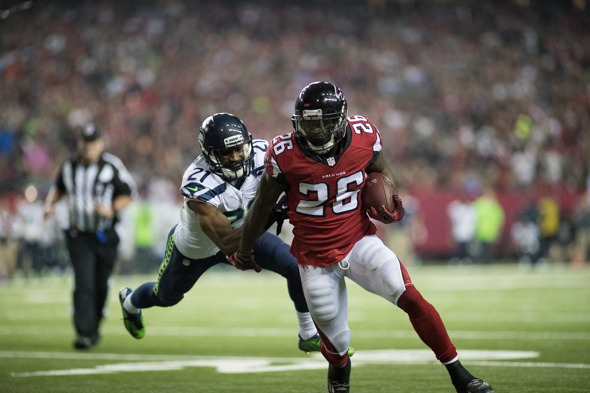 ATLANTA — The Seahawks were sufficiently vulnerable this season to have needed the No. 2 seed’s bye for the extra prep time coach Pete Carroll has exploited so well for postseason success. It’s what he taught Dan Quinn, the Falcons coach and Carroll’s defensive coordinator in the Super Bowl triumph over the Broncos, which was so decisive in part because of the extra week of practice.

The first thing Quinn said at the podium Saturday after his first playoff victory as a head coach, which came at the expense of his mentor: “For us, this game was won during the week. The preparation . . . I wish you could have seen that.”

Certainly the football world saw the result, a 36-20 win over the Seahawks that wasn’t that close. Not when the first three Atlanta touchdown drives covered 75, 99 and 75 yards.

Quinn taught his team exactly what to expect from the Seahawks defense, and had the perfect quarterback, Matt Ryan, to execute the short, quick throws into the middle of Seattle’s zone. The game plan was executed so cleanly that, in their nine-play, 99-yard drive, the Falcons didn’t even get to a third down.

Had any one of the five defeats and a draw been turned into a victory — all but the Green Bay loss were close — Seattle would have hosted. Which is not to say that had the seedings been reversed, with the Seahawks having the bye and the home field, the result would have reversed.

While the Falcons are a Super Bowl-worthy team that nearly won in Seattle during the regular season, being better prepared and at home would have given the Seahawks a chance to disrupt Ryan, stay competitive and perhaps even intercept a pass, something they did not do in the final seven games of the season.

Regarding the first meeting between the teams in October, Quinn admitted that he was off his game in the return to Seattle after such a big role in bringing the city its first pro football championship.

“I’ll be honest with you,” he said, “I’m glad we got that (return to Seattle) out of the way in the regular season. That first game was weird.”

The Falcons lost 26-24, but Atlanta fans will tell you that they were denied a shot at a late win only because Seattle CB Richard Sherman interfered with WR Julio Jones on a deep pass declared incomplete without a foul.

It’s hard to prove the Falcons’ play was diminished by the distractions of Quinn and his staff, but there’s no doubt about the virtues of his full concentration on outsmarting the team he knows well.

No single play turned Saturday’s outcome, because the Falcons won the line of scrimmage, both sides. Ryan’s 338 passing yards were the most in a playoff game against a Carroll defense, largely because Ryan seemed to know when the blitz was coming and threw well against it. And Atlanta’s defensive line held RB Thomas Rawls to five rushing yards after Seattle’s opening drive produced a touchdown.

Regarding the defense, the significance of FS Earl Thomas’s injury absence has been obvious, and addressed repeatedly. But even with Thomas in October (and minus injured Kam Chancellor) Ryan threw for 368 yards and three touchdowns.

Thomas’s unique set of skills allows the defense to take risks in coverage that other defenses simply can’t do. But increasingly, teams are learning to throw the underneath routes and seam routes that the Seahawks tend to concede as part of the overall strategy of over-the-top denial. Even with no Thomas, Ryan connected on just two passes longer than 22 yards. He had no incentive to take a deep drop for a long pass when smaller chunks were readily available.

The upshot of this vulnerability becomes the center of the off-season debate on next steps to back Carroll’s contention that the Seahawks remain in the middle of their championship window, and not at the end.

The well-documented miseries of the offensive line for most of the past two seasons inform the conventional wisdom that the Seahawks have to invest a high draft pick in a tackle to help protect QB Russell Wilson. His leg injuries from being clobbered by pass rushers speak to that wisdom.

But the Seahawks just did invest big with RG Germain Ifedi. In his rookie season, he often proved to be the weakest link, despite his size and strength. While it is always premature to call a pick a bust after one season, especially on the line, it’s also true that NFL-average linemen be found in greater abundance throughout a draft. And in the Seahawks case, average would be good.

What the Seahawks most urgently need now is premier help for the Legion of Boom. The secondary has had a hard time filling the cornerback role opposite CB Richard Sherman. Its current occupant, Deshawn Shead, left the game in the third quarter with a knee injury that is reportedly an ACL tear requiring surgery. Even when healthy, Shead, a valiant worker popular throughout the team, is an average-at-best talent.

Then there is the question of Thomas’s mobility upon return from his broken leg. Thomas recently ended speculation about his desire to continue with a tweet that said he will be back. But in what condition?

As long as Carroll remains coach, defense is the first, second and third priority. Within that, the secondary is most important. Whether the Seahawks put greater need on getting a cornerback starter, or a safety to eventually inherit the spots of either Thomas or SS Kam Chancellor, is hard to say in January.

For those who lives will be dreary without the Seahawks and lust for speculation to fill the void, here’s a list by Pro Football Focus of top draftees at all positions, subject to change with college juniors declaring for the draft before Monday’s NFL deadline.

One name that jumps out is Michigan’s All-America Jabrill Peppers, who has LOB written all over him. He is likely a top-15 pick, as was Thomas. The Seahawks pick 27th.

Certainly there are other top talents. But as much as the O-line exerts a gravitational pull for emergency servicing, the 99-yard drive by the Falcons Saturday represents a scar on Carroll’s memory that will glow red for years.