Outbursts by Richard Sherman and Michael Bennett added drama to the seasonal stress created by Saturday’s playoff ouster in Atlanta. So did a mysterious knee injury to Sherman. 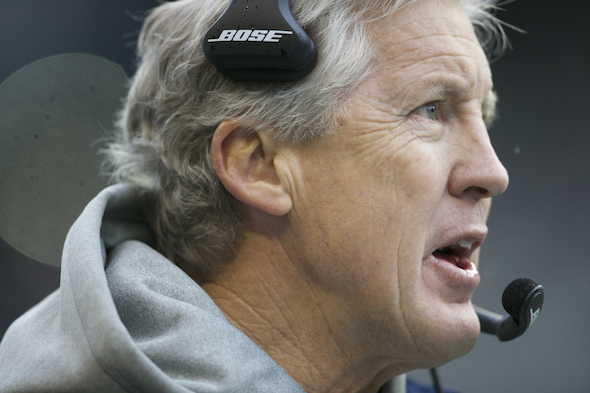 Pete Carroll took responsibility for his role in creating some of the player drama on the sidelines. / Drew Sellers, Sportspress Northwest

A discombobulated, bewildering Seahawks season grew a little more opaque Monday when coach Pete Carroll said CB Richard Sherman played much of the second half of the season with a knee injury, but seemed surprised that word never became public.

Nor did he know that DE Michael Bennett engaged in an extended, profanity-filled locker-room rant Saturday in the Georgia Dome over a reporter’s question, inspiring Sherman, of all people, to cross the room to calm down Bennett.

Small things, yes, but logs for the fire burning around a disappointing season that ended with with a 36-20 playoff loss to Atlanta — an undisputed demonstration that the Seahawks have drifted down from the top tier of the NFL.

“Honestly, I didn’t realize we hadn’t revealed it,” Carroll said of the knee injury at his final press conference of the season with local media. “I don’t even remember what game it was, it was somewhere in the middle . . . I don’t know. He was fine about it. He didn’t miss anything. The same with Russell. (Richard) was fine about it. I don’t know how they do that, but they did.”

On his Monday morning segment on 710 ESPN, Carroll implied that Sherman’s injury — apparently an MCL sprain that, according to Carroll, will not require surgery — was a factor in Sherman’s much-discussed sideline outbursts toward coaches, as well as the deteriorating relationship with media members.

Carroll said he admired “how hard (Sherman) worked at this thing and how he tried to handle it, and also when he made his mistakes, he was burdened by that. He had to work his way through it. He’s a good man, and he’s trying to get everything right.’’

Regarding the failure to disclose the injury, Carroll said, “I’m feeling like I screwed that up with not telling you that because that happened. But he was OK. So I don’t know. He never missed anything, which is probably why.”

For all the admiration, Carroll on the radio said he felt compelled to have “a big meeting” with Sherman Sunday, prior to players’ departures  — apparently at least the second one-on-one in a month between the two — then address the entire team about engaging in distracting public behavior.

“We got through it better than on the inside than on the outside, for those watching,” Carroll said. “We were able to directly go at stuff. Sometimes the setbacks can allow you to grow, and it did. But we don’t need those distractions. It’s hard enough to get it done when everybody is in lock step.

“So again, we get it. We know what happened. We dealt with it. When it was time to reprimand, we did. When we had to take action, we did. But even in the last game, there were times it didn’t look like it needs to look. We were off with our focus at times. So we addressed that in here on Sunday. Clearly, it’s not the way we want to be representing who we are and what we’re all about, so we have to do better at that.”

Regarding the Atlanta game distractions, Carroll was referring to incidents in which the Seahawks blew their cool, notably Bennett against a Falcons offensive lineman in the third quarter, after which he was pulled from the game briefly. In the locker room, Bennett lit into KCPQ news anchor Bill Wixey for a question about the lack of pressure on QB Matt Ryan.

The most damning thing Bennett said was, “what adversity you went through?” He was unaware of the fact Wixey was treated for Hodgkin’s Lymphoma in 2009.

Sherman, along with other players, came up to Bennett to calm him down, which seemed to work. A year ago, Bennett had a similar post-game run-in with a reporter in Carolina after the Seahawks season ended, and also after a game against the Cowboys in Dallas.

The outburst Saturday went viral and made Bennett the target of criticism. But Carroll said he hadn’t heard about it.

“I didn’t know anything about it until today,” he said. “I don’t even know what took place. I haven’t even read the article.

“I think that’s just another example of not being poised at the time. I know Michael is a very remorseful guy when he makes his mistakes. I haven’t talked to him about it at all.”

One guy who called out Bennett, at least indirectly after the game, was teammate SS Kam Chancellor, during a TV interview.

Carroll admitted he was disappointed.

“Not necessarily surprised, but I’m disappointed we weren’t able to control it, that guys weren’t able to keep it inside,” he said. “These guys have been very emotional players, and it’s part of the thing that we like about them. But there’s a point where you can go too far. Our guys are working at figuring that out.”

Legendary around the league for his tolerance of individual personalities, Carroll was asked if he takes responsibility.

“I do,” he said, “because it’s important for me to tap into these guys, their emotional side, and it becomes part of their play that when it fits the person. But sometimes, like I said, we make mistakes. I needed to do a better job of helping them head that off.

“This is a game that calls for guys to play at the edge. I don’t think there’s anything wrong with that. But I think there’s a mistake when they go too far.”

Carroll’s Monday session revealed that fractures are happening in the Seahawks empire. To his credit, he has taken responsibility, and presumably addressed them directly with the team. Whether he can walk the players back from their bad acts remains to be seen. These are not kids; Bennett is 31, Sherman 28.

His relationship with Sherman in particular seems increasingly tenuous. The knee injury episode only adds to the confusion. It’s understandable that players and teams want to hide weaknesses, and we all know every player is hurting to some degree. But to suggest the injury destabilized him emotionally is concerning: Is it OK to yell at teammates and coaches on national TV if you’re hurting?

For his part, Sherman needs to gain enough self-awareness to know his actions as a leader are seen by all and taken to heart by many. His fellow Legionnaire Chancellor is right: Humility can be an asset, not an embarrassment.

And for some perspective: The last championship-caliber team Seattle had before the Carroll regime was the Sonics of the mid-1990s under coach George Karl. They would have a label for the Seahawks’ descent into disputation and disharmony.

They managed to work through it. So can the Seahawks. Success is always difficult.

Shead went down in the third quarter without contact after defending a pass that went incomplete.

“It’s going to be all the way until next season before he really gets to start seeing how far along he is and if he can come back,” he said. “So we have to think like we got to pull from the ranks of the guys and see how they do . . . I thought he had a very, very good year. He was challenged a ton. Being on the other side of Sherman can wear anybody out.  He hung in there tough throughout the season. He’s a terrific team guy so if he is not available, we’re going to really miss him.”

To critics of Bevell: Shut up

Finally, to complete a day filled with cranky news, Carroll answered a question about critics who insist that Bevell, the OC, be fired.

“I’m sorry to say this,” he said,  “but they don’t know what they’re talking about. Darrell does a great job.”