Forward Herculez Gomez, who made 12 starts for the Sounders during their MLS Cup-winning season, announced his retirement Tuesday in order to join ESPN as an analyst. 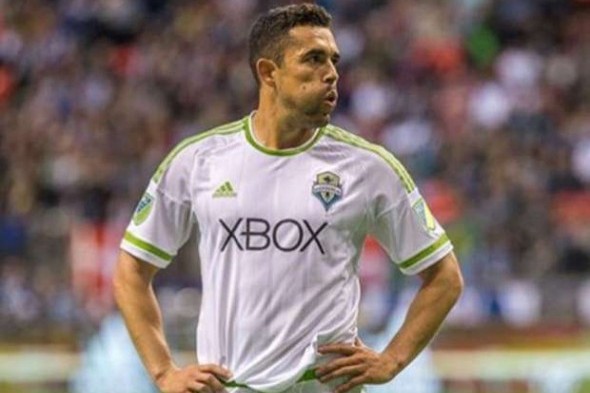 Herculez Gomez, who made 26 appearances across all competitions for the Sounders in their MLS championship season, Tuesday announced his retirement from professional soccer in order to join ESPN as a soccer analyst for its English- and Spanish-language networks. The 34-year-old forward will join ESPN immediately.

“I’m so grateful for the years that this game has given me, and I’d like to say thanks to every coach, teammate and fan that has helped me along the way,” said Gomez. “It’s never easy to close the book on your playing career, but I’m very excited to join ESPN and continue to grow the game of soccer throughout the U.S. and Mexico.”

Gomez signed with the Sounders in March, marking a return to Seattle. He played for the USL Sounders in 17 matches in 2003 while on loan from the LA Galaxy, his first MLS team.

“I’d like to thank Herculez not only for being a valuable member of our championship squad last season, but also for his contributions to this game over the past 15 years,” said Sounders coach Brian Schmetzer. “I’ve known Herc a long time, and I have no doubt he will continue to be a valuable asset to the soccer landscape in this country going forward. On top of that, he’s a unique personality with a great perspective, so I’m excited to watch him on ESPN.”

“Herc’s cultural role in our locker room during this past season was invaluable,” said Seattle GM Garth Lagerwey. “From the day he arrived, he made contributions on and off the field in Seattle, none bigger than his mentorship of our young players during the run to MLS Cup. Herc has played a role in our sport for a long time, and while we’ll miss seeing him on the field, we’re excited for his next step with ESPN.”

Gomez made 53 appearances over three seasons with the Galaxy, helping LA win the 2005 MLS Cup. He played three more seasons in MLS with the Colorado Rapids and Kansas City Wizards before signing with Mexican club Puebla in January 2010, where he scored 10 goals and became the first American to lead a foreign league in scoring.

He spent five years in Mexico, scoring 37 goals in 142 appearances, including a two-year stint with Santos Laguna, where he recorded eight goals in 33 appearances in the 2012-13 season (during a 2012 CONCACAF Gold Cup match against the Sounders in Torreon, Mexico, Gomez scored two goals in a 6-1 Santos win). He returned to MLS in 2015 when he signed with Toronto FC.

The Las Vegas native also made 24 appearances and tallied six goals for the U.S. Men’s National Team. He was a member of the 2010 FIFA World Cup roster and represented the USMNT at the 2013 CONCACAF Gold Cup.

In his new role, Gomez will work on ESPN FC, ESPN’s a daily soccer news, highlights and information program, as well as a studio analyst for the network’s coverage of MLS, USMNT and other international soccer competitions. On ESPN Deportes, he will appear on studio programs Fuera de Juego and Futbol Picante.