TE Jimmy Graham and OLB K.J. Wright of the Seahawks will play in the 2017 Pro Bowl as NFC replacement players, bringing Seattle’s total of representatives to six. 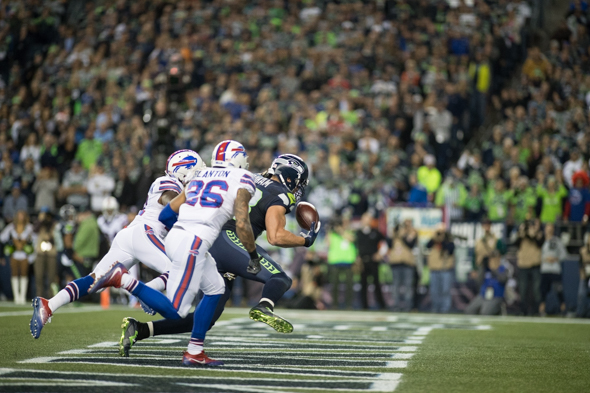 TE Jimmy Graham and OLB K.J. Wright of the Seahawks were added to the NFC Pro Bowl roster Tuesday as injury replacements. Graham makes his fourth Pro Bowl appearance (and first with Seattle since his 2015 trade from New Orleans), while Wright makes his debut. The Pro Bowl is Jan. 29 in Orlando.

“It feels really good,” Wright said Tuesday after getting the news from head coach Pete Carroll.  “I called my family, they were all excited. This is something I was hoping would happen this year and I’m glad that it happened.”

The 30-year-old Graham recovered from a potentially devastating patellar tendon tear in November 2015 to catch 65 passes for 923 yards, third best among NFL tight ends. and six touchdowns, one behind WR Doug Baldwin for the team lead.

“I thought Jimmy had a terrific year,” Carroll said in his season-ending press conference from the Virginia Mason Athletic Center Monday. “He was explosive. He was dynamic. He blocked like he’s never blocked before. He became a factor on the perimeter blocking. He’s a highlight film.”

Graham previously made Pro Bowl teams in 2011, 2013 and 2014 while playing for the Saints after joining New Orleans as a third-round pick out of Miami in 2010.

The 27-year-old Wright, a 2011 fourth-round pick out of Mississippi State, played the third-most defensive snaps on the team in 2016, seeing action on 1,052 plays while recording 126 tackles (12 for loss), four sacks, eight quarterback hits, five passes defensed, one forced fumble and a fumble recovery.

With Wright added to the Pro Bowl roster, the Seahawks have seven defensive starters with at least one Pro Bowl on their résumé — Wright, Wagner, Avril, Bennett, Sherman,

SS Kam Chancellor and FS Earl Thomas. This is the sixth consecutive season the Seahawks have had at least five Pro Bowl players.

Cable will stay with Seahawks

Assistant head coach Tom Cable will be staying with the Seahawks after it was reported  by ESPN Tuesday that Kyle Shanahan will be offered the head coaching job with the San Francisco 49ers. He’s offensive coordinator for the Atlanta Falcons, who have at least one more game Sunday in the NFC championship.

Cable interviewed Sunday with the 49ers and was reported to be the second choice behind Shanahan.

“I can tell you that he interviewed and that took place yesterday,” Carroll said Monday. “He’s waiting to hear. I think he has a real chance. I’m rooting for him, of course, and if he gets it we’ll root against him.”

The 49ers also have a vacancy in the general manager’s job, and interviewed the Seahawks’ co-directors of Seattle player personnel,Trent Kirchner and Scott Fitterer. Kirchner reportedly said he will stay in Seattle, while Fitterer is said to remain a candidate.

Carroll said Monday that besides the uncertainty about Cable, he believed the rest of his coaching staff would remain intact. Defensive coordinator Kris Richard was earlier interviewed by Buffalo for their head coaching vacancy, but the Bills chose Sean McDermott, the Carolina defensive coordinator.