Huskies quarterback Jake Browning has reportedly undergone surgery on his throwing shoulder to correct a problem that originated in November. UW never said a word about it. 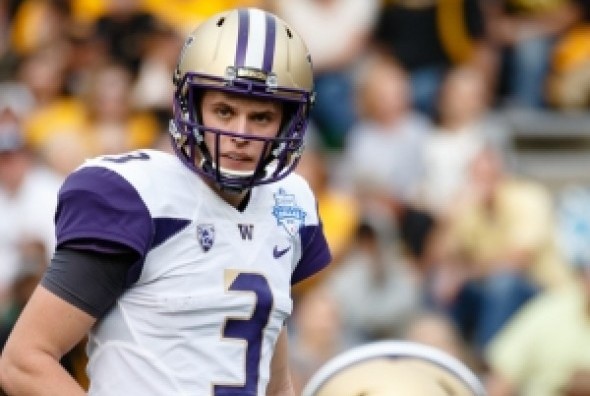 University of Washington quarterback Jake Browning has undergone surgery on his throwing shoulder, nearly two months after injuring it during a game against Arizona State. The Seattle Times reported that the exact nature of Browning’s injury remains unclear, but that the Huskies kept it concealed in order to protect Browning from further harm.

Browning apparently had the injury during Washington’s 44-18 win over Arizona State Nov. 19. At the time, Browning, a sophomore from Folsom, CA., had a 202.79 quarterback rating and was on pace to break Russell Wilson’s NCAA single-season record. But over his final five games, Browning produced a 161.82 mark.

In the Pac-12 Conference title game, Browning had the worst statistical game of his career, completing 9 of 24 for 118 yards and two touchdowns. Against Alabama in the national semifinals, he went 20-for-38 for 150 yards, one touchdown and two interceptions.

As a general rule, UW coach Chris Petersen does not discuss injuries. But earlier this month, during an interview on 710 ESPN, Petersen said, “I do think he was fighting through some things as the season went along. Let me say this: We’ve got some tough kids on our team. Those kids, they fight through some things. We don’t talk about who’s hurt and all this stuff, but Jake’s a tough kid. I’ll just say that. He fought through some stuff.”

Throughout the latter part of the season, Browning was reported on various national telecasts as having a “dead arm” and “suffering from fatigue,” as a means of explaining his declining production. Never was it mentioned that he might have a physical ailment, as now appears to be the case.

Browning had one of the best seasons by a quarterback in UW history in 2016, tying the Pac-12 record with 43 touchdown passes and finishing sixth in the Heisman Trophy voting. His 3,430 passing yards were second-most in a season in program history, and his passer rating of 167.52 was a school record. But he had a dramatic drop off in the final stages.

In 2015, Browning sat out the Huskies’ game at Stanford with an injury to his right shoulder, the same one he had repaired Tuesday. The Huskies deemed it relatively minor at the time.