Edgar Martinez fell short of the 75 percent of the vote needed for Hall of Fame induction, but his trend line is headed up after he collected 58.6 percent. He was at 43.4 last year. 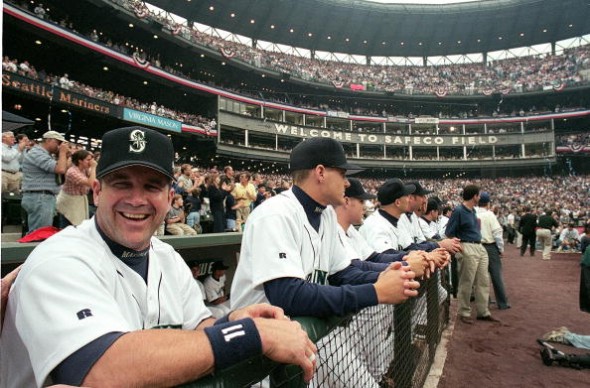 Edgar Martinez fell short in Hall of Fame voting in his eighth year on the ballot. / Sportspress Northwest file

On the ballot for the eighth time since his retirement in 2004, former Mariners DH and current batting coach Edgar Martinez has again failed to generate sufficient support to enter the Baseball Hall of Fame. Needing 75 percent of the vote from the Baseball Writers Association of America for induction, Martinez was named on 58.6 percent of the ballots in results announced Wednesday, not nearly good enough but by far his highest total.

Hoffman and Guerrero are prime candidates for election next year, as are two first-time eligibles, Chipper Jones and Jim Thome. That would be a class of four in 2018.

Raines was elected Wednesday in his 10th year of eligibility. In his eighth year on the ballot (2015), Raines attracted 55 percent, less than Martinez has in his eighth year. So Martinez remains viable, but has only two years to add 16.4 percent to his voting total.

“I knew it wasn’t going to happen this year,” Martinez said via the Mariners. “It was more about seeing how much of an increase I got. Good to be heading in the right direction. It’s humbling to see the love from the fans who want me to get in. I’m almost at a loss for words.”

Martinez’s surge of15.2 percentage points, to 259 votes (191 last year) in the latest round of voting can be attributed to several factors, starting with a changing electorate in which older BWAA voters were purged and replaced by younger ones more in tune with sabermetric analysis, where Martinez shines.

The Mariners threw a lot of logs on that fire with a vigorous, persuasive blitz conducted by their information staff that specifically targeted Hall of Fame voters. Bulging with exotic statistical comparisons between Martinez and many of the Cooperstown elite, it is difficult to see Martinez as anything but a Hall of Famer.

Also, several recent inductees, including Randy Johnson (2015), Pedro Martinez (2015) and Ken Griffey Jr. (2016), plus a slam-dunk future first-ballot inductee, Mariano Rivera, have all lobbied hard on Martinez’s behalf. Rivera, the greatest closer in the history of the game, said this to Charlie Rose in a TV interview:

“The only guy that I didn’t want to face, when a tough situation came up, was Edgar Martinez. It didn’t matter how I threw the ball. I couldn’t get him out. Oh my god, he had more than my number. He had my breakfast, lunch and dinner.”

As one BWAA voter described it: “That’s what you call game knows game.”

In addition to Jones and Thome, next year’s first-year eligibiles will include Andruw Jones and two former Mariners, Omar Vizquel and Jamie Moyer.

Three former Mariners, Mike Cameron, Carlos Guillen and Arthur Rhodes, were also on the 2017 ballot. None received a vote.

Hall of Fame Weekend is July 28-31 with the induction ceremony  July 30.

This is the record of support for Martinez since he became HOF eligible in 2010: