According to an ESPN report, the Seahawks could lose a second-round pick in the 2017 draft for failing to disclose CB Richard Sherman’s knee injury. 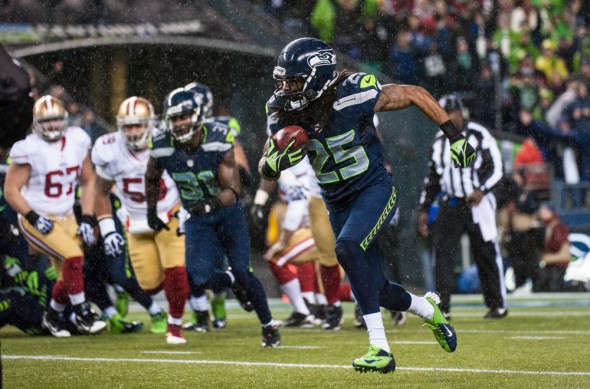 The Seahawks could lose a second-round pick in the 2017 NFL draft for failure to disclose CB Richard Sherman’s knee injury on the league’s weekly injury report, according to ESPN’s Chris Mortensen. That would be an elevation from the fifth-round pick Seattle was docked last September as a result of a repeat violation during organized team activities.

Mortensen reported that the Seahawks, who could also be fined, are cooperating with the league, contending that Sherman did not miss a snap, which should be strongly considered on their behalf.

The Seahawks didn’t disclose that Sherman played half the season with a sprained MCL until coach Pete Carroll brought it up at his season-ending press conference at the VMAC Monday.

“I didn’t realize that we hadn’t even revealed it,” Carroll said. “I don’t even remember what game it was. It was somewhere in the middle (of the season). He was fine about it, he didn’t miss anything. Same with Russell (Wilson), he was fine about it. I don’t know how (players) do that, but they did.”

The Seahawks likely will argue that Sherman not only didn’t miss playing time, he didn’t miss practice and was never in danger of doing so, thus no violation. Sherman was listed several times under the NIR (not injury-related) category, which is often taken to mean a rest day. Retired RB Marshawn Lynch was often listed as NIR.

A second-round pick would be a steep price to pay for hiding the injury. The Seahawks own the No. 56 overall choice, a selection Seattle needs to replenish its roster.

But the Seahawks have been punished by the NFL three times in the past five years for rules violations, which is why the league may be considering increasing the level of punishment this time.

The first three were about permitting too much physical contact during off-season team practices, finally causing the league to take away a fifth-round choice, in addition to fines.