Nigerian princes are not myths of internet culture. The Sounders now have one: Seyi Adekoya, from Lakeside High School and UCLA, who chose soccer over medical school. 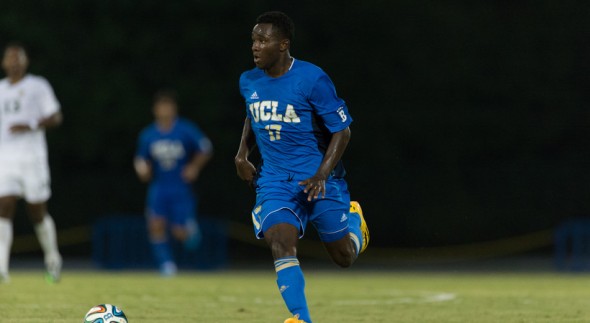 The last time you pondered the phrase “Nigerian prince,” you were probably sifting through your spam folder, deleting offers to grant you fabulous wealth for a nominal processing fee. You should know, though, that Nigerian princes are real, and the Seattle Sounders just signed one to a homegrown contract.

Adeseyi Shinobu Adeyinka Adekoya, or just Seyi (pronounced “Shay”) to those who know him, is many things: Seattle native, Lakeside School alumnus, aspiring doctor, the newest forward signed by the Sounders, and, yes, an actual Nigerian prince.

Adekoya laughed Wednesday in a phone interview when asked about his lineage.

“I think the way it works is that my grandfather was a chief,” Adekoya said. “He’s still the chief, so my father is technically a prince, and so am I. My brothers, sisters and cousins are also princes and princesses.”

Whether the noble blood turned him into a high achiever, or the trend of high achievement made his family noble, remains to be seen.

A three-year standout at UCLA, Adekoya excelled at one of the nation’s most historically successful programs. His player biography has three hefty paragraphs of accomplishments, including three All Pac-12 Conference selections and a host of other accolades. “Ranked the fastest player at the Sounders Academy,” proclaims one line from the paragraph about his youth experience.

Adekoya first considered leaving UCLA early to turn pro last summer, when he spent a week training in Spain. His parents wanted him to finish school, where he was a pre-med student with plans to become a doctor.

The Seattle native realized he had to choose.

“I came to the realization, ‘All right, I’m studying pre-med, but I’m also playing soccer at the same time,’” Adekoya said. “’Realistically, they’re both not going as well as they could. I’m not getting as much time to study because I’m playing soccer, and I’m not getting as much time to practice my game because I have class. I decided that I needed to put one of my passions aside and focus on one for now.

“I definitely want to play and soccer only lasts so long because of your body, so I want to do this now.”

When his season ended, Adekoya was in touch with the Sounders and informed them that he was considering turning pro. What followed was months of emails, phone calls and negotiations, which ended with all sides satisfied, including Adekoya’s parents, who understood the logic to pursue his soccer dreams now and his medical dreams later.

Now comes the difficult part of adapting from college to the professional game, and sharing the field with big names such as Nicolas Lodeiro and Clint Dempsey, and former college opponents such as Cristian Roldan and Jordan Morris.

“Over breaks, I would always come to train with the Sounders. It’s shock and awe. Everyone knows (the star players). When I’m around them, I still get a little bit nervous because I’m on edge and I don’t know what to do. Watching them play and focusing on how they do it so easily, also trying to focus on my own game.

“It’s going to be interesting this season controlling myself to where I feel comfortable. I’m playing with people of different ages now. I need to get over that awe factor that these guys are pros and focus on that these guys are my teammates, this is my team, and this is my sport. Calm down and play soccer like I normally do.”

Still, Adekoya couldn’t help but admit to a little excitement over joining his boyhood club, after playing with its academy after, at his father’s urging, he left the Washington Crossfire.

For Adekoya, it’s part of an ongoing paradigm shift in youth soccer in the United States, away from the premier clubs that reigned in the 1990s and early 2000s toward the MLS Academy model that grows every year.

“I can definitely see the American soccer culture changing,” Adekoya said. “When I was young, all the good players played club, but then in high school I started playing (for the Sounders Academy). Now, most of the really talented kids play for an academy and then go to college.

“Now you have people like some of my teammates who left school and went pro this year. It’s cool to see the system changing, and how the younger players are living their dream earlier and taking the opportunity at 17, 18, 19 and 20.”

As a rookie, Adekoya believes he can help the first team find success as it engages in its MLS title defense. But he said his first goal was to have a successful training camp and become accustomed to a new style of play.

If he manages that, Adekoya’s quickness and creativity will mean that medical school gets put on hold for some time.

The Sounders selected three players in the third and fourth round of the MLS SuperDraft Tuesday: Georgetown midfielder Doug Goodman with the 12th selection (56th overall) and Wright State’s Jake Stovall with the 22nd pick (66th overall) in the third round, and defender and former Sounders Academy product Kyle Bjornethun from Seattle University with the 88th and final pick of the draft in the fourth.

Goodman, 21, made 80 appearances with the Hoyas in four years. His four goals and three assists as a rookie landed him on the 2013 Big East All-Rookie team. Goodman started all but one of his 60 appearances from his sophomore through senior seasons.

Stovall, 23, anchored a defensive unit that conceded only 18 goals his senior season. The Ohio native was named to first-team All-Horizon League and NSCAA third team All-Great Lakes region during his senior year.

Bjornethun, 21, made the All-Western Athletic Conference team in each of his four years at Seattle U., including three first-team selections and two WAC Defender of the Year awards in 2015 and 2016.

Midfielder Andreas Ivanschitz said via Twitter that he was leaving the Seattle Sounders:

1/3 It’s been a great pleasure being a part of the Sounders organization for the last 1 1/2 years… pic.twitter.com/n3HHt7B2cD

2/3 I would like to thank my teammates, the coaching staff and every member in the front office for an incredible experience…

3/3 and unforgetable moments wearing the Sounders jersey. Thank you Seattle

The Austrian was one of four international players signed by the Sounders during the 2015 summer transfer window seeking to stop a run in which the Sounders went 1-9, derailing a campaign to repeat as Supporters’ Shield champions.

Often injured, Ivanschitz scored five goals and recorded 10 assists in his year and a half.

It is unclear where Ivanschitz will go, but rumors have indicated that he may sign with FC Viktoria Plzen of the Czech First League.