Clear your late afternoon Tuesday and join Jennifer Cohen and Art Thiel at a happy hour to to talk about University of Washington athletes and the big issues of college sports. 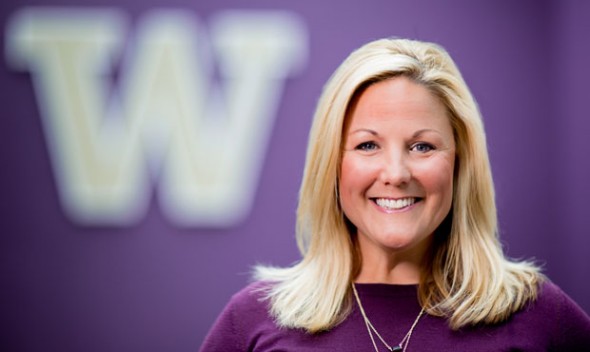 Have a question about Jake Browning? Kelsey Plum? Lorenzo Romar? How about the Huskies’ run to the College Football Playoffs? Or the Pac-12 Networks? Or the $100 million annual operation of the University of Washington athletics department?

Do we have the evening for you.

Actually, it’s a happy hour, which is even better.

Jennifer Cohen, nearing her first anniversary as UW athletics director, will fill you in on the dramas and backstories at The Sports Salon Tuesday at the World Trade Center Seattle.

Cohen joins Sportspress Northwest’s Art Thiel at one of Seattle’s premier waterfront locations, across from Pier 66, to take audience questions in a casual atmosphere of good food and drink.

A Tacoma native and lifelong Huskies fan, Cohen has been part of the UW athletics department for 17 years in multiple jobs. On Feb. 1, 2016, she succeeded Scott Woodward in the top job for a department with a $100 million annual budget that operates 20 NCAA  varsity sports.

Cohen played key roles in helping raise money for the $280 million renovation of Husky Stadium, as well as in the hiring of football coach Chris Petersen. She will offer her thoughts on the issues of the college sports day, including NCAA reform, academic progress, budget demands and gender equity.

If you’re interested in the teams, people and stories surrounding UW and all of college athletics, please join us for an opportunity to ask and to learn — and to eat, drink and network while gazing from the fourth-floor restaurant at night-time Elliott Bay.

Advance tickets ($20 for World Trade Center members, $30 for non-members) can be purchased at Brown Paper Tickets here or at the restaurant door at the fourth-floor entrance.

Program is brought to you by ERG Legacy Fund, Sportspress Northwest and World Trade Center Seattle