Clint Dempsey participated in practice, retiree Zach Scott made a surprise appearance, and a host of youngsters began chasing their dreams as the Seattle Sounders had their first training session Tuesday. 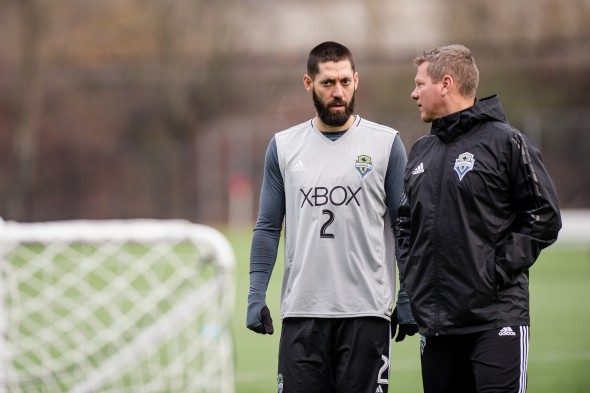 Clint Dempsey has been cleared to practice with the Sounders. / Jane Gershovich, Seattle Sounders FC

Opening their 2017 training camp on a frigid morning at the Starfire Sports Complex in Tukwila Tuesday, the MLS champion Seattle Sounders, who declined contract options on 13 players after the title, debuted a mixture of familiar faces and unknowns.

Things have not yet kicked into high gear, but the opener March 4 in Houston is a ways off. Several players are still resting from the short offseason, including MLS Newcomer of the Year Nicolas Lodeiro, and keeper Stefan Frei, who was released from training with the USMNT after what he called a bad ankle sprain that may sideline him for most of the preseason.

Jordan Morris, Brad Evans, and Chad Marshall are still training with the national team, while Lodeiro was receiving what GM Garth Lagerwey described as much-needed rest after playing an entire season with Boca Juniors before transferring to Seattle and helping the Sounders to its first MLS Cup.

The Cup remains the goal.

“I’m thinking: How do we get the team back into MLS Cup and give us a chance to win a second year in a row?” Schmetzer said. “The last two champions before us didn’t even make the playoffs. That is our challenge for this year. I’m thinking about things a little differently (as a head coach).”

A major question mark hovers over Clint Dempsey, who sat out the latter portion of 2016 after doctors discovered the 33-year-old had an irregular heartbeat. Dempsey has been cleared to practice, but it is not clear if he is eligible for game minutes in preseason friendlies.

The club is tight-lipped about a timeline for Dempsey’s return. Schmetzer offered no new insight.

“I’m just happy to have him out here and hope that he continues to progress,” Schmetzer said. “It’s not up to me. It’s Clint and the doctors. Everybody here hopes that timeline continues in a positive direction, but you never know. We don’t want to set any unrealistic expectations, but we’re happy to have him today.”

The rest of the first day for Schmetzer,was devoted to evaluating the young talent invited to training camp.

Homegrown players Seyi Adekoya and Henry Wingo joined draftees Brian Nana-Sinkam, Jake Stovell, Kyle Bjornethun, Dominic Oduro and Doug Goodman as the newest batch of hopefuls trying to crack in to the first-team squad, along with a host of players from Seattle Sounders 2 and the Sounders Academy..

“(The attention is) skewed more toward the young guys and the rookies,” Schmetzer said. “Trying to find individual habits. The veteran guys, I know them pretty well.  So I’m not worried about them the first couple days.

“You see who can combine, look to combine, who covers for whom. Subtle things like that, but most of that will come together in Tucson once we pare this group down and start talking about tactics.”

It wasn’t all business, however. Schmetzer said that he used a surprise appearance from recent retiree Zach Scott to relate to tell newcomers the importance of dedication to the club, and to break up some of the monotony of practice.

“I put a little PowerPoint presentation together for the guys to introduce (assistant coach Gonzalo Pineda) and some of the coaching staff,” Schmetzer said. “The last clip was highlights of Zach Scott, and then Zach came from behind everyone.

“That was a great surprise — no no one knew he was coming. He told the guys: ‘You really have to grab on to this, your careers are short. Real jobs aren’t that fun, make sure you appreciate what you’re doing here.’

“That was a good way to kick things off. It was important for the team to hear.”

The Sounders travel to Tucson for preseason camp Jan. 29, during which they will play a friendly against the Portland Timbers. Players will return to camp in mid-February before participating in the Carolina Challenge Cup against the USL’s Charleston Battery, the Columbus Crew, and Atlanta United, one of 2017’s expansion franchises.

The Sounders Tuesday traded the rights to defender Tyrone Mears to Atlanta in exchange for $50,000 in general allocation money. Mears appeared in 65 MLS regular-season appearances over the past two seasons — all starts — including 32 in Seattle’s 2016 MLS Cup title run.