Hours after acquiring C Tuffy Gosewisch off waivers from Atlanta, the Mariners traded with Oakland to land LHP Dillon Overton, who pitched in seven games with the Athletics last season. 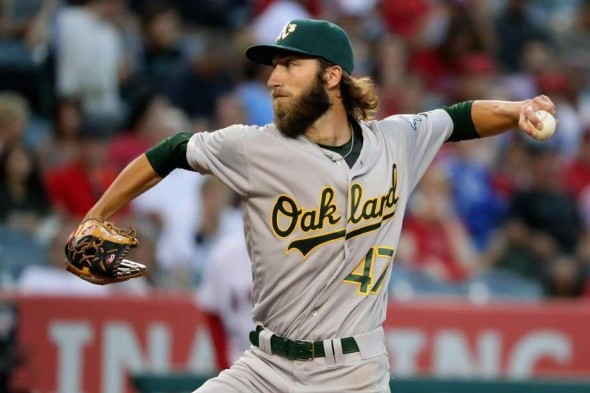 “Dillon has been successful at every level of the minor leagues,” said Seattle GM Jerry Dipoto. “He is a young, controllable pitcher with major league upside who adds to our depth.”

Overton was selected by Oakland June 25 and made his MLB debut in a start against the Angels that day. In seven games with the Athletics, he went 1-3 with an 11.47 ERA with 17 strikeouts and seven walks.

A native of Clinton, OK, Overton was selected by Boston in the 26th round of the 2010 draft but did not sign. After three seasons at the University of Oklahoma, he was selected by Oakland in the second round in 2013. In parts of three minor league seasons, he compiled a career record of 20-14 with a 3.18 ERA. Overton made his pro debut with the AZL Athletics in 2014 after undergoing Tommy John surgery on his left elbow July 9, 2013.

Goldstein, 22, split his first pro season with the Arizona League Mariners and Short-A Everett. In 19 combined games, he hit .279. Goldstein was the Mariners’ ninth-round pick in the 2016 draft out of University of Illinois.

Sucre, 28, appeared in nine games over two stints with Seattle in 2016 due to an injury. He hit .480 with one home run. He was on the 60-day disabled list from March 1-July 6 after having surgery in January 2016 to repair damage in his right ankle.