Thiel: Getting real with politics as part of sports

One of the hallmarks of sports, from kids to pros, is inclusivity. Which is why the Trump administration’s efforts at exclusion hits sports hard. Sports never was isolated from politics; it sure won’t be now. 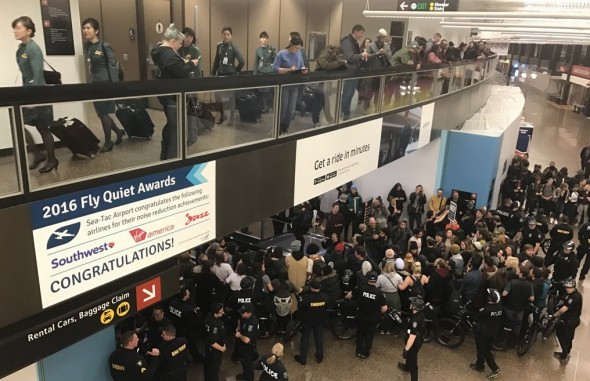 When President Trump’s 90-day travel ban was first imposed, police at Sea-Tac airport had to physically remove protesters from the lower concourse as business continued as usual on the upper concourse. / Jon Ostrower, CNN via Twitter

“What else is in his lexicon? Baseball sticks? Football hats? But sure, I’m the foreign one.” — Former president Obama, after Republican senator Ted Cruz called a basketball hoop a “basketball ring.”

For all those who consider sports a haven from the maelstrom, I’m sorry. In the coming months and years, you’ll have better luck getting a dog to stop his bark at ba–.

The convulsions roiling the nation in the first month of the Trump administration will play out in sports, not apart from them. The political conflicts aren’t going to dominate the games, but they will hang in the air, just as they do these days at work, at school, on the bus and the playgrounds.

As in those places, many people will make strong efforts around sports to avoid political subjects, because they dread the encounters with the other side, and the subsequent distraction and perhaps distress.

But it is nearly unavoidable in sports, for one reason: There may be no other high-profile activity in the U.S. that is more inclusive. When Trump’s words and deeds threaten inclusivity, the backlash is and will be pervasive.

From youth leagues to the pros, sports in America are where the greatest assimilation of dissimilar people occurs at the earliest ages. It is where we learn to work together, resolve conflicts and understand the value of rules.

That’s not to say that sports are free of racism, sexism, homophobia and religious prejudice. Hardly. But sports force all those fears into a tie for last, well behind the moments, lessons and people of the game. Sports are often where new ways get tried first, and is guaranteed to get the most attention.

He gets to adjudicate for a curious nation the health consequences of concussions, the risks of performance-enhancing drugs, the horrors of domestic and child abuse as well as bullying, and the navigation of social media in the workplace.

He is spectacularly unqualified to deal with any of those things. But he is stuck. His industry is, for better or worse, one from which many people take their cues.

He gets one break: Pro football players are overwhelmingly born and raised in the U.S.  Even so, Goodell’s sport begat the anthem kneel-down that protested domestic social injustice, which quickly spread to many high schools across the U.S. He can’t escape social and political forces.

In pro basketball, pro baseball, pro soccer and a variety of college sports, rosters are loaded with athletes of international origin, which realistically includes every one of us that isn’t a Native American.

When restrictions threaten sports’ inclusiveness, such as Trump’s proposed 90-day ban on travel from seven Muslim-majority countries, sports feels it quickly. While federal courts, starting with one in Seattle, intervened to stay the executive order, Trump indicated he may try a revised version. Who knows what that will look like?

On the Sounders’ 27-man roster are nine athletes born in eight countries besides the U.S. — Uruguay (two), Jamaica, Switzerland, Trinidad & Tobago, Ghana, Cameroon and Panama. None of the countries are on the original banned list. But it’s early.

Besides the travel ban, looming on the horizon is Trump’s infamous wall, perhaps of more interest to the Mariners.

On their 40-man roster of the moment — presuming GM Jerry Dipoto has to sleep sometime — are 13 players born in nine countries aside from the U.S.: Dominican Republic (three), Cuba (three), and one each from Mexico, Puerto Rico, Venezuela, Japan, Canada, Brazil and Panama.

It’s not that any of the Mariners bearing green cards are threatened. But they have friends, family members, businesses and national pride that will feel impacts of border regulation by the clumsiest and most ineffective of means.

More immediately, the fifth World Baseball Classic begins March 6, when the U.S. team and 15 other nations around the world likely will bear witness, via signs in the stands and protests in the streets, to people with political statements using sports to reach audiences via TV and internet in the U.S. as well as their homelands.

The fact is, sports have never been apart from politics. From the nationalism in the first modern Olympics in 1896 to Seattle’s current arena quest to get back the NBA, from Jesse Owens to Jackie Robinson to John Carlos to Muhammad Ali to Ping-Pong diplomacy to Billie Jean King to Title IX to Kareem Abdul-Jabbar, politics and and the people and institutions of sports have been tightly intertwined.

Yes, sometimes it spoils the fun. But every time you feel some resentment boiling up, please tell it to athletes whose lifetime Olympics ambitions were thwarted by the successive boycotts of the 1980 and 1984 Olympics ordered by the U.S. and Soviet governments.

In early January at a Town Hall event about sports and politics, Michael Bennett, one of the Seahawks’ most outspoken players, was asked why he just doesn’t shut up about political and social issues.

“When people want us to be part of brands just to sell things, it makes me go crazy,” he said. “When it comes time to do things that are great, they won’t let you do it. But when it’s time to sell something, everyone encourages you to do it.

“Most of the time, people want to consider the athletes as just a part of the sport. They forget we’re human beings, part of society. We can’t take ourselves out of it simply because we’ve made money (from sports success), or because we have a lot of fans, or we do nice things. We have families affected by social issues. I think it’s stupid that they want us to be not part of it.

“We have such a great platform to be able to share interests and messages, and help change lives. It’s a responsibility we’re capable of.”

Stick to sports? We can’t have one without the other. It isn’t always bad.

Having borne live witness to the Opening Ceremony at nine Olympics, I can say there is no greater majesty in human group endeavor than in the moments before the Olympic flame is lit.

To sweep one’s eyes across the floor and stands of a giant stadium and realize parts of entire globe were there, willing to suspend decades and even centuries of enmity, jealousy and contempt, in order to play, was always a colossal salute to the best of humanity.

Without the politics to overcome, it would be just another halftime show.