Thiel: No more writers as voters for halls of fame

Why is it that journalists vote on awards for another industry? It’s a sports custom whose time has come and gone. Baseball in particular can’t even explain its standards for admission, so don’t look to us. 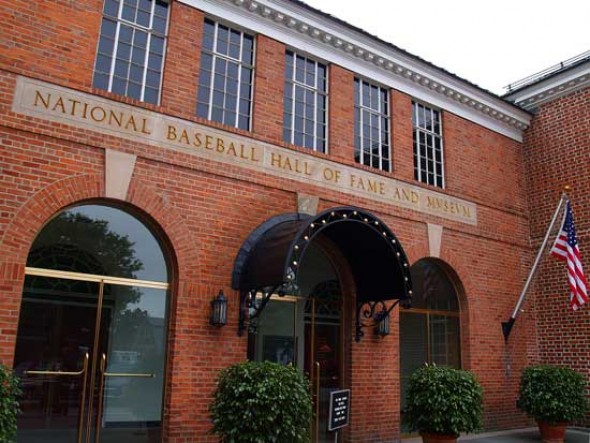 The Pro Football Hall of Fame voting has an odd custom about to be observed again. On the night before the biggest game of the year, Saturday before the Super Bowl, the hall gathers journalists who cover the NFL — members of another industry — in a hotel ballroom in order to have one from each nominee’s franchise city lobby on his behalf for votes from the other journalists for the football industry’s highest honor.

If I’m an electrician, I don’t want my profession’s highest award bestowed by a panel of plumbers. I mean, yes, we often do work shoulder-to-shoulder with plumbers, and we do know quite a bit about the other’s business. Because of rivalries and jealousies, jobs won and lost, there’s always a chance of bias. But I’d prefer the judgment of someone who’s wired whole houses many times to tell me I belong with the best who’s ever unspooled Romex.

Absurd as is the NFL’s hall custom — we haven’t even discussed the cranky mood among writers missing a Saturday night in the party capital of the nation by arguing with each other over completion percentage  — the Baseball Hall of Fame voting is even more awkward.

While MLB and the Baseball Writers Association of America at least had the good sense to find a dead day in the off-season to do the announcement for maximum national attention, the entrenchment of journalists in the baseball process is even more odious.

In addition to being in another industry, the writers vote with different standards for nominees.

Put simply, some voters let the purported use of performance-enhancing drugs by nominees influence their decision-making; others do not.

It doesn’t matter if there is little or no evidence, nor does it matter that neither MLB nor the private family foundation that runs the hall provide guidance. For the longest time, everyone looked away, yet now some vote their outrage.

As a result, in a sport engorged with data, the game’s highest accolade includes guesswork complicated by a vague moral standard not uniformly shared nor accepted by voters from another industry whose own lack of vigilance made it complicit in the years-long PED charade.

How does this keep going on?

On Jan. 18, 442 BWAA voters chose a new Hall class of three who exceeded the 75 percent threshold for admission — Jeff Bagwell, Pudge Rodriguez and Tim Raines, all worthy selections based on baseball merit.

But Bagwell and Rodriguez were among numerous players of the era rumored to have used PEDs (Raines admitted using cocaine during games, but that’s a whole ‘nother story).  In the previous year that brought in the Mariners’ Ken Griffey Jr. with the highest vote total in history, his lone classmate, Mike Piazza, made it despite widespread suspicion about how a 62nd-round draft choice could have become so fabulous.

In the current voting, moving up fast were Barry Bonds and Roger Clemens, arguably the best hitter and best pitcher of the era. But they also have, despite their denials, a documented history with  PEDs, use of which came with penalties beginning in the 2005 season. The final season for both was 2007, Bonds at 42 and Clemens at 44.

The uptick for Bonds and Clemens comes on the heels of the December selection by a 16-person hall committee of retired commissioner Bud Selig, who presided over the so-called steroid era before being embarrassed into action. According to public comments by some voters, the complicit Selig’s entry into the hall ended their rationale for denying the hall to players under suspicion.

Whether you agree with the selections, it is clear that the three independent entities in the process — MLB, the hall, and the BWAA membership — have not agreed on standards beyond “integrity, sportsmanship and character” in the ballot rules, which obviously have been ignored regularly in previous votes going back to the custom’s 1936 origins.

Until MLB and the hall agree on standards, I would be thrilled to learn my fellow sports scribes decline to participate, as I did some years ago. Then stay away.

I’m not trying to high-horse the matter: News organizations such as the New York Times, Los Angeles Times and The Washington Post long ago forbid staffers from voting. Nor do I think the writers have been careless in their discharge of the responsibility; most are diligent and intense about the task (which they do for free).

But the hall vote, as well as the annual votes for MVP, Cy Young and other awards, are the province of others, not the news media. Since most players’ contracts include bonuses for the annual awards, many writers who are in regular contact with players have some influence over the players’ compensation.

When Alex Rodriguez was a precocious 20-year-old with the Mariners, I recall a pre-game moment on the Kingdome rug in September 1996 when I asked him what he thought about the fact that he was a serious candidate for the MVP award (he finished second, by three votes, to Juan Gonzalez, and ahead of teammate Griffey, in fourth).

He answered my question with a question.

“Why? What difference does it make?”

“Well, none. I was just wondering.”

Not only was it my first real insight into Rodriguez — a view the baseball world would come to share over the next 20 years — I became aware of the drama between him and Griffey over the award.

The Seattle writers who did have votes were caught in a hissy fit between two divas. The scribes were not part of the game, yet they were helping decide awards, bonuses and a clubhouse pecking order.

The middle is no place to be.

Let the baseball and football players vote. Let the managers and coaches vote. Let anyone vote. Let my people go.