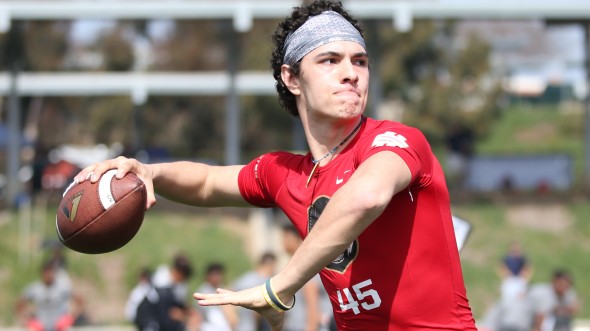 Connor Neville, from Wilsonville, OR., cast his lot with the Cougars Wednesday. / Cougfan.com

“For this class, we wanted to emphasize speed on defense and playmakers on the offensive side of the ball,” said Leach, who will be trying to reach his third consecutive bowl game next season. “We’re very excited about this class, which took years to put together. Our staff did an excellent and impressive job. From our standpoint, these were the best players we could possibly get.”

For the Cougars, perhaps the biggest development of National Signing Day was the late addition of WR Jamire Calvin, who previously committed to Nebraska but flipped at the last minute. He has a four-star ranking.

“We had a good dialogue with Jamire from the beginning,” said Leach. “He could have gone to about 50 places and we’re fortunate he came to Washington State. He had a lot of options, but we think he made the right decision, given who’s throwing him the ball (Falk).

Falk’s future replacement could be Connor Neville, who set a slew of records at Wilsonville High in Wilsonville, OR.

“He got on our radar two years ago when he attended a camp here,” said Leach. “He gets bigger every time I see him. He’s got a great arm, great feet and is very competitive.”

Three of Washington State’s recruits will arrive with four-star ratings. Listed alphabetically, they are:

Late flip from Nebraska . . . Caught 86 passes for 1,312 yards and 14 touchdowns as a senior at Cathedral High . . . Named Co-MVP of the Angelus League, All-USA California by USA Today and was selected to play in the U.S. Army All-American Game last month . . . He is a member of the Scout.com 300 (No. 259 regardless of position) and ranked as the No. 7 wide receiver prospect in the West and No. 35 nationally by scout.com.

As a senior, named All-State honorable mention after throwing for 2,756 yards with 35 touchdowns and 10 interceptions in 10 games . . . completed 59.5 percent and averaged 275.6 passing yards per game . . . rushed for seven touchdowns . . . rated four-star prospect by ESPN.com and Scout.com . . . ranked as No. 22 quarterback in the country and top quarterback in Oregon by scout.com . . . Named to the ESPN300 and the ninth-best dual-threat quarterback by ESPN.com.

Played two seasons at City College of San Francisco . . . rated four stars by Scout.com . . . rated three-star by ESPN.com and Scout.com . . . ranked as the No. 11 junior college tackle in the country by ESPN .  . . Will have two years to play two seasons . . . Enrolled at WSU January  and will participate in spring practice . . . ranked No.18 junior college prospect by scout.com.