Despite closing the first half on a 15-0 run for a double-digit lead, the Huskies mixed turnovers and a hasty shot selection with defensive letdowns to collapse against USC for their 4th loss in a row. 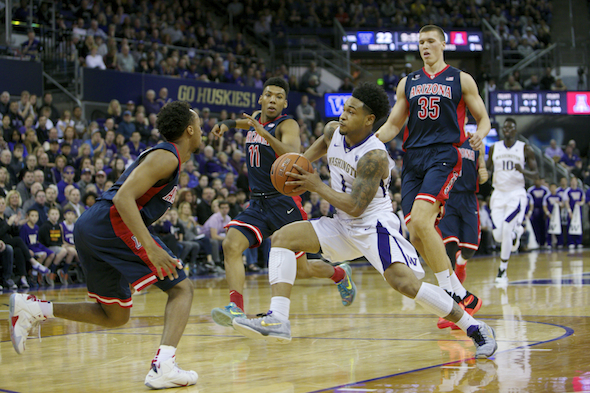 Despite a strong first half, the Washington Huskies came undone against USC late in the game Wednesday. / Drew Sellers, Sportspress Northwest file

The Washington Huskies ended the first half against USC on a 15-0 run, looking as if a tough road trip to Arizona had developed the will to end their Pac-12 Conference skid. It meant nothing. A collapse in the final minutes led to an 82-74 defeat at Hec Edmundson Pavilion Wednesday (box).

“The word pops up again: Inconsistency,” coach Lorenzo Romar said. “It sums up this entire game. I thought we did a really good job in the first half. We came out in the second half extremely flat. It’s something we talked about at halftime, about guarding against that. The game wasn’t close to being over.”

The Huskies committed five of their 17 turnovers in the first five minutes of the second half. The Trojans went on a 13-4 run that cut the 37-27 lead at the half to one.

USC (19-4, 6-4 Pac-12) pressed the issue. Led by a game-high 23 points from Bennie Boatwright, playing for the first time after missing 15 games due to a knee injury, the Trojans took the lead with 4:38 to play and won going away.

Skittish at the prospect of losing another close game, the Huskies leaned on perimeter shooting. The plan failed. Of the 11 shots taken over the final five minutes, nine were three-pointers. Only one went in.

“We had turned the ball over so much that we were a little tentative,” Romar said. “We began to settle for just three-point shots. That made the difference. SC (has a great defense), and that can start to play on your mind. The last few minutes, it seemed to be on our mind. We looked tentative making a pass.

“We settled. We weren’t determined to get the ball inside.”

The letdown spoiled a first-half run in which UW found its groove on both sides of the ball, holding the Trojans scoreless for the final 5:39.

Freshman guard Markelle Fultz made two chase-down blocks. David Crisp drove the baseline and scored with a layup from underneath. Six-foot-three guard Carlos Johnson grabbed back-to-back offensive boards in the paint against bigger opposition before drawing a shooting foul. Fultz put the cherry on top with a pair of three-pointers.

For six minutes, the Huskies could do no wrong. But errors and haste returned at the end of the game.

Fultz finished with a team-high 20 points before fouling out as the Huskies chased the game in the final minute. Sophomore forward Noah Dickerson added 17, while Crisp and Matisse Thybulle scored 16 and 12, respectively.

Dickerson said that previous failures in close games were interfering with the ability to close this one.

“Last year we had Andrew Andrews. When we had a great game like that, he’d been playing for long enough to know how to take it from (opponents),” Dickerson said. “Unfortunately, we don’t have that yet. We’ve had many, many close games. We just haven’t been able to get that grit game to see how it feels to take it from somebody.

“Almost none of us knows what that feels like. We were hoping it was going to be this one, but there’s more games ahead.”

It is unclear what it will take for Washington to win a close game, but if grit can be practiced, Crisp was searching for a way. More than an hour after the game ended and despite playing 32 minutes, Crisp practiced shooting on the Hec Ed floor while custodians cleaned seats and the clock ticked toward midnight.