Thiel: Seahawks beat ATL and Pats, but so what?

The Seahawks were good enough to beat both Super Bowl entrants, but imploded physically and emotionally over the season’s second half. Richard Sherman was in the middle of all of it. Is it time for a big change? 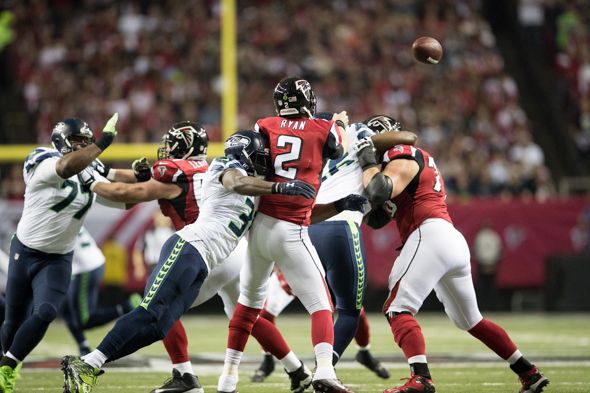 In honor of Fake News Month/Year/Decade, I declare the Seattle Seahawks champions of the National Football League, because they were the only ones to beat both the Atlanta Falcons and the New England Patriots this season. Those teams are playing the Super Bowl Sunday in Houston for no reason. Sad!

See? Alternative facts aren’t so bad, after all. Hey, the sports world already has a big investment in fantasy football, so what’s stopping this fantasy?

Oh. I thought we were done with stuff like that.

There’s no getting around the truth that the Seahawks beat the Falcons Oct. 16 at the Clink, 26-24. On Nov. 13, the Seahawks traveled to Foxborough and beat the Pats 31-24, their only loss this season when QB Tom Brady wasn’t locked in Commissioner Roger Goodell stocks in the public square for crimes against footballs.

In hindsight, the triumphs over Sunday’s teams only add to the aggravation of Seahawks fans after an 11-6-1 season. Seattle in 2016 had the talent and the plan to beat the best.

What they didn’t have throughout the season was good health and a commitment to doing the right thing.

The health was no mystery. Those two wins had one obvious thing in common: A robust FS Earl Thomas. In the game following the win over the Pats, Thomas broke his leg in a friendly-fire collision with SS Kam Chancellor. The Seahawks never recovered.

More than anyone else on defense, Thomas’s rare skills made him The Indispensable Man.

Other owies were many and varied, particularly the ankle, knee and pectoral injuries to Wilson that hampered him until the final month. The list is long, but one often overlooked is a sprained ankle by rookie RG Germain Ifedi that delayed his regular-season pro debut a month. No one with a future among the Seahawks needed more reps than Ifedi, who was a first-year bust.

Besides Thomas on defense, Chancellor and DE Michael Bennett missed games, and we learned after the season that CB Richard Sherman played the final half of season with an MCL sprain. The failure to disclose the injury until Pete Carroll’s final post-season presser is the subject of an NFL investigation that could cost the Seahawks a second-round draft choice.

Which brings us to doing the right thing.

While some will always say injuries are no excuse, that misses the point that they are legitimate reasons for substandard play, and that they are more or less unavoidable.

What was avoidable is the Carroll mistake with the non-disclosure, and more important, the handling of Sherman.

Something isn’t working between Sherman and Carroll when the player follows his disruptive outburst against coaches in the third quarter of the Falcons game with another one in December against the Rams.

Against the Falcons, a miscommunication with Chancellor’s injury replacement, Kelcie McCray, caused Sherman to rant against defensive coordinator Kris Richard, to the point where teammates had to surround Sherman to calm him down.

As a partial result, the distracted D allowed Atlanta consecutive drives of 75, 79 and 97 yards, all concluding with TD passes from QB Matt Ryan, turning a 17-3 halftime lead into a 24-17 deficit.

“He got really upset that we didn’t play something correctly,” Carroll said after the game. “We’re emotional guys, and we ride that emotion. I’m not surprised. When we get that hot, we have to control it better so we don’t get in the way of what’s coming up.

“I think there was some impact.”

By the time of the Pats’ triumph, which concluded with with a magnificent goal-line stand on New England’s final possession that flipped the narrative of the Super Bowl outcome between the teams, the Sherman episode seemed to be receding.

But he brought it back in mid-December, loudly complaining along the sideline to Carroll and offensive coordinator Darrell Bevell about the playcalling from the one-yard line.

The episode didn’t have much impact on a game won by Seattle 24-3, but prompted a one-on-one meeting between Sherman, a critical figure in the locker room leadership, and Carroll, who said he heard enough contrition to avoid calling the episode insubordination. Sherman later was cranky with the media, but that was far secondary to disturbing Carroll’s long-held mantra to “protect the team.”

The day after the season ended, Carroll volunteered that he had “a big meeting” with Sherman.

“I admire how hard he worked at this thing and how he tried to handle it, When he made his mistakes, he was burdened by that. He had to work his way through it. He’s a good man. He’s trying to get everything right.”

Yet Sherman twice failed to do the right thing, nearly costing the Atlanta game.

Regarding injury, the Seahawks, having paid market value to their core players under the salary cap, had little money left for adequate backups.

Between the physical and the emotional, the Seahawks decayed from midseason to the point where they were only modest competition for the Falcons in a playoff rematch in the Georgia Dome, a 36-20 loss that easily could have been greater.

Sunday’s Super Bowl features teams that knocked Seattle from the playoffs in two of the past three seasons. As you watch, consider whether the Seahawks’ five-year run of 10-win playoffs is closer to the end than the middle of the Carroll-Schneider-Wilson empire.

If it’s closer to the end, what needs to happen is that salary cap room needs to be created to get deeper at multiple positions. That can mean moving highly paid players in their prime.

Not saying that Richard Sherman, 28, should be traded. He’s still a huge asset to the team. But the notion is worthy of consideration, especially at a $13.3 million salary for 2017.

Even after beating the Falcons and Patriots, it was a hard season, which has to inspire hard choices.