Said rival Ronnie Lott of Kenny Easley: “He changed the game of football on the defensive side.” The Seahawks safety (1981-87) Saturday was elected to the Pro Football Hall of Fame. 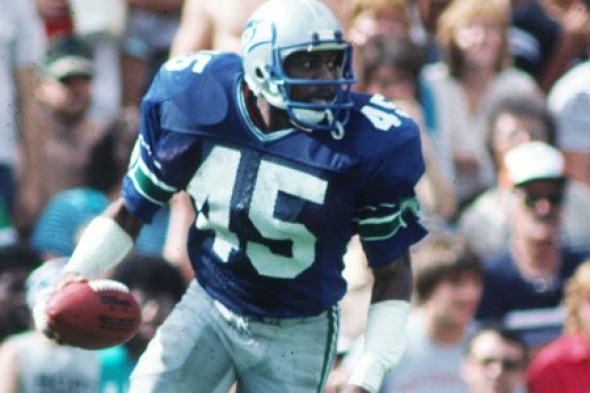 Kenny Easley (1981-87) Saturday became the fourth former career Seahawk to earn enshrinement in the Pro Football Hall of Fame. A five-time Pro Bowl safety, a four-time All-Pro and a senior nominee this year, Easley received the necessary 80 percent of the votes from the Hall of Fame Selection Committee’s 46 selectors, and will be inducted in Canton, OH., Aug. 5.

“Enormously grateful for this opportunity,’’ Easley said in a press conference shortly after the 2017 class was announced. “To be re-considered after 20 years, I’m glad it happened now because I feel that if it happened in 1997 I wouldn’t be as grateful as I am right now at age 58 for this to happen. So that means a great deal to me that it happened right now.”

Two other finalists with Seattle connections failed to draw adequate support for election. Don Coryell, a city native (Lincoln High School, University of Washington) who pioneered the modern passing game while coaching the St. Louis Cardinals (1973-77) and San Diego Chargers (1978-86), missed on his fourth attempt as a finalist. C Kevin Mawae, the Seahawks’ first-round pick in 1994 who spent the majority of his career with the New York Jets, missed on his third.

Easley was a three-time All-America at UCLA and a four-time, first-team all-Pac-8/10 selection before the Seahawks selected him No. 4 overall behind RB George Rogers, LB Lawrence Taylor and a Bruins teammate, RB Freeman McNeil.

Easley had his best year in 1984, when he led the NFL with 10 interceptions (no Seahawk has reached double figures since) that included a pair of pick-sixes (25 yards vs. New England, 58 vs. Kansas City). He also had a three-pick game at San Diego (Oct. 29) and won the Associated Press Defensive Player of the Year award, becoming the second safety (Miami’s Dick Anderson, 1973) so honored. Only three safeties, Ed Reed in 2004, Bob Sanders in 2007 and Troy Polamalu in 2010, have won the award since.

“Whenever I recruited a safety, I used Kenny Easley as the model,” former University of Washington football coach Don James told the Seattle Post-Intelligencer in 1990 (the closest James came was Lawyer Malloy). “He had everything: size (6-foot-3, 205 pounds), fabulous speed, and he was an absolutely ferocious hitter. He was an almost perfect football player. He could do everything.”

No safety was paid the kind of respect that Hall of Fame coach Joe Gibbs accorded Easley when his Redskins faced Seattle in 1983 in the Kingdome. To avoid Easley, Gibbs repeatedly sent his tight end in motion — not to get him into the passing game, but to force Easley to follow him to the sideline in hopes of taking him out of the play.

During the 1984 season, prior to a Seahawks-Broncos game at Mile High in Denver, head coach Dan Reeves held a mid-week press conference to talk about the matchup. Taking the microphone, Reeves started his remarks with this:

“The most important thing we have to do Sunday is be aware of where Kenny Easley is on the field at all times.”

Reeves might be the only coach in NFL history to begin a press briefing by talking about the opposing team’s safety.

“Ronnie Lott was a great player,” former Raiders TE Todd Christensen said in 2002. “It goes without saying what he did in his career. But in all candor – and this is no knock on Ronnie (a 2000 Hall of Famer) – Kenny Easley was a better football player.”

Christensen and Easley were teammates in four AFC-NFC Pro Bowls. In one of them (1987), Easley moved from safety to cornerback for three quarters and held three NFC wide receivers without a catch.

“One of the most amazing things I’ve ever seen,” said Christensen.

“He was the best safety I’ve ever seen,” said 2015 Hall of Fame executive Ron Wolf, who worked in player personnel and as a GM with the Raiders, Buccaneers, Jets and Packers from 1963-01.

Two years ago, Lott, who played at USC when Easley was at UCLA, made this case for Easley’s enshrinement in Canton:

“Kam Chancellor right now is as good as any safety that’s played the game of football. It’s hard for me to say this, but there was only one guy that I know that’s better, and that’s Kenny Easley. He was defensive player of the year and the best player to play the safety position, ever.

“Kenny could do what Jack Tatum could do, but he also could do what corners could do. He could do what Mike Haynes could do. He was not only a great hitter and great intimidator on the field, but he was a great athlete. What made him so special — him, Lawrence Taylor — those guys changed the game of football on the defensive side because they were not just guys that were big hitters. Now, all of sudden, you are seeing guys who are big hitters but also as athletic as anyone on offense.”

In a conference call with Seattle reporters Thursday, Easley credited Lott with keeping his Hall of Fame candidacy stoked.

“I can tell you this,” said Charlie Joiner, a 1996 Hall of Famer. “Easley was so dominating on film that when you were on the field playing against him, you could be on the other side of the field and you could still feel him. You just had that feeling that he was around somewhere.”

Despite five Pro Bowl appearances and 32 interceptions (two more than Richard Sherman’s career total), the Seahawks traded the 28-year-old Easley to Arizona in the spring of 1987 for QB Kelly Stouffer.

The official line was that the Seahawks wanted a replacement for Dave Krieg. But Easley had been a major NFLPA (union) activist in the 1987 players strike (also the 1982 strike) that led to the use of replacement players. That, many believed, factored heavily in Seattle’s decision to deal him.

Easley never made it to the field with the Cardinals, flunking his physical when it was discovered he had irreversible kidney damage from consuming too many painkillers to treat a chronically injured ankle. That quickly ended his career and prompted Easley to sue the Seahawks, their trainer and three team doctors.

The suit eventually settled out of court, but not before Easley was forced to undergo a kidney transplant at the University of Washington Medical Center in 1990. Easley, who subsequently had a hip replacement, remained estranged from the Seahawks for the next 15 years, during which time he was named to the NFL’s 1980s All-Decade Team — every member of that team is now a Hall of Famer — and earned induction into the College Football Hall of Fame (1991).

Under Paul Allen’s ownership, the Seahawks reached out to Easley in 2002 and inducted him into their Ring of Honor. Until late last year – ironically after he had triple-bypass heart surgery — he had not received serious consideration for induction in the Pro Football Hall of Fame due to the brevity of his career – 89 games – plus the fact he played safety, a position largely ignored by selectors (only seven of the 24 DBs in the HOF played safety exclusively).