UCLA dealt a massive blow to the tiny appearance of progress by Washington Saturday, serving up a 41-point blowout — the worst loss of Lorenzo Romar’s increasingly tenuous tenure at Montlake. 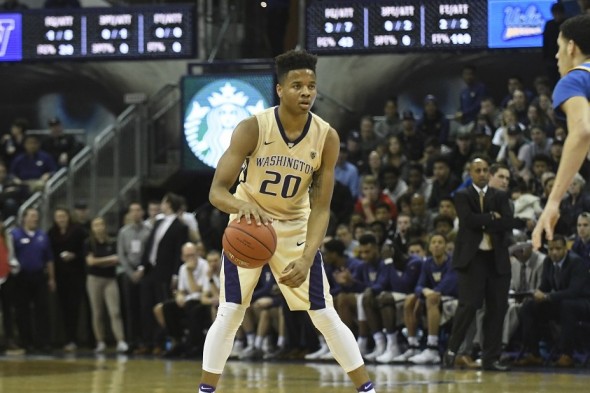 Markelle Fultz continues to excel, but the rest of the Huskies looked dismal in a 41-point blowout Saturday. / Alan Chitlik, Sportspress Northwest

In their previous two losses against Arizona and USC, the Huskies showed improvement and even a glimpse of promise. Saturday night in front of the first sellout in five years at Hec Ed, No. 11 UCLA dissolved the mirage, serving up a 107-66 beat-down of Lorenzo Romar’s beleaguered Huskies (box).

The 41-point margin is the fourth-worst loss in program history, and the worst in Romar’s 15-year tenure. He sounded nearly despondent.

“I don’t feel that was our basketball team tonight,” Romar said. “I didn’t recognize our team. We’ve dropped more games than we would like, but our team tonight was different. We didn’t seem to have the fight in us tonight to challenge a very potent offensive team.

Washington (9-14, 2-9 Pac-12) surrendered season highs in points allowed and opponent rebounds (41). The Huskies committed 20 turnovers, its worst mark in conference play and second-worst of the season.

Romar saw nothing in which to take pride at either end of the court.

“I don’t see an area where we really excelled or played well tonight,” Romar said. “I haven’t done a good enough job to get us to turn the page. We’ve talked to our team about that: ‘We’re coming close.’  But if you ever get to a point where you take a step back mentally, it can get a lot worse. It got a lot worse tonight.”

If Washington can point a bright spot, it remains freshman guard and Pac-12 leading scorer Markelle Fultz. He scored a game-high 25 points on a 9-of-19 performance, including five three-pointers. Sophomore forward Noah Dickerson, who scored 10, was the only other Husky to hit double digits.

The Bruins were paced by Lonzo Ball’s 22 points, while forward T.J. Leaf bagged a 20-point, 10-rebound double-double. Guard Bryce Alford knocked down five three pointers among his 21 points, while Aaron Holiday had 20.

With every mounting embarrassment, Romar finds himself backed further into a corner regarding his future employment at Washington. Romar gave his most complete response to date about calls for his job after the game.

“That has not been indicated to me by the people I work for,” Romar said. “At the same time, as head basketball coach, or as a leader, it all stops and ends with the leader. If the job is not getting done, then the leader has to own up to it. I’m owning up to it.

“However, the hand that we have been dealt (when a number of players transferred out of the program in 2015) is that we’ve rebuilt our program — I thought — within a year’s time. We felt we had it set, then we had a couple guys that we didn’t plan on going to the NBA in Dejounte (Murray) and Marquese (Chriss) leaving us. Those guys didn’t even know that was going to be the case. You lose two of them, you’re kind of starting all over, but you take a couple steps back.”

Romar concluded his thoughts with a lofty look to next year, when his recruiting class, ranked No. 2 nationally, joins a group of veteran players who will be fairly described as battle-hardened after absorbing two years’ worth of conference beatings.

“Next year is going to be a year where we’re finally going to be older with more experience and have some really good young players coming in,” Romar said. “These guys are more equipped to come in right away and help you. This year we’ve had guys that were not key players, but were key role players, that have been asked to step in and become key scorers.

“This is not a situation where you can’t see the light at the end of the tunnel. Everything is in place, if we make progress, and we will.”

The words come as small comfort to those stuck in the tunnel with the Huskies, who may finish at the bottom of the Pac-12. Romar’s promises of a brighter tomorrow may be true, but only because the Huskies find themselves in the middle of a very dark winter.