Thiel: Time for hoops change at UW, but how?

Firing Lorenzo Romar sounds easy, except he would get a $3.2 million buyout from a program swimming in red ink, and the Huskies would likely lose the program’s best recruiting class. Still,107-66 at a home sellout? 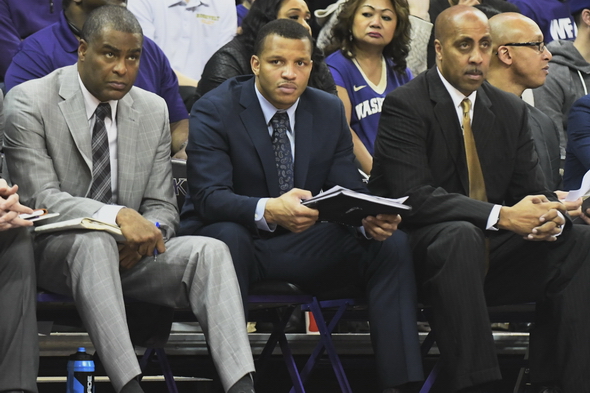 Coaches Michael Porter Sr., Will Conroy and Lorenzo Romar had no answers Saturday, or this season. / Alan Chitlik, Sportspress Northwest

Dreadful as it sounds, we may have a hostage situation with the University of Washington’s men’s basketball program. After a 41-point loss Saturday to UCLA — as dismal a game at Hec Ed as I can remember, especially with the first sellout crowd in five years on hand — there is no pure-basketball reason for keeping Lorenzo Romar as coach.

I write that as someone who, as with nearly everyone who has engaged with him, likes and respects Romar for his character and values in a largely corrupt industry.

The hostages? The players and the fans who care about UW hoops.

Without malicious intent, Romar has largely protected his immediate future by nearly fire-proofing himself. If Washington, a program running an annual operations deficit for the past two years and likely for at least two more, were to fire Romar after the season, he would be owed a $3.2 million buyout. His 10-year contract runs through 2020.

Additionally, hiring an experienced replacement in the preposterous marketplace for major-college coaches would add to the UW’s financial problems, due substantially to the failed promises of the Pac-12 Networks.

Additional insulation is provided by a five-player recruiting class arriving in the fall that is ranked fifth in the nation by rivals.com, whatever that means. Without anyone saying so directly, the implication is that all or most of the class will be lost if Romar is no longer at UW.

Logic says that makes sense, mainly because one of his assistant coaches, Michael Porter Sr., is the father of the incoming class’s star, Michael Porter Jr. of Seattle’s Nathan Hale High School.

If you haven’t heard already, the 6-10 Porter — who transferred here from Missouri with his little brother, 6-8 Jontay, also a potential premium recruit who has verbally committed to UW — is world-class and already would have made the leap to the NBA, if rules allowed.

It also happens that Romar is the kid’s godfather, thanks to a friendship with his dad that goes back more than 30 years to their days together playing for Athletes in Action, a Christian outreach organization that, according to its website, “helps sports-minded people think and live biblically at the intersection of sport and Christianity.”

Even if the relationship between Romar and Porter Sr. is sincere and longstanding, Porter’s spot on the bench has done nothing to help the fortunes of this year’s team. At 9-14 (2-9 in the Pac-12 Conference), the Huskies, despite the presence of star freshman guard Markelle Fultz, are bad and getting worse.

Repeatedly this season, Romar has said the team was on the verge of turning the corner. Finally Saturday, it sounded as if Romar realized he’s been in a round room.

“I didn’t recognize our team,” he said. “Our team tonight was different. We didn’t seem to have the fight in us tonight to challenge a very potent offensive team.”

I asked him if he was surprised that nothing he has tried worked.

He can hope all he wants. Saturday was discouraging for all UW participants and witnesses.

Sure, UCLA (21-3, 8-3) is ranked 11th with a legit shot at the Final Four. But Washington began the game with dropped passes, three-foot airballs and an inability to block out or move feet defensively. On several possessions, the Bruins simply whipped passes around the Huskies’ zone so efficiently that they didn’t even need to dribble to get to an uncontested shot.

Tension boiled over a bit in the first half when Romar benched reserve guard Carlos Johnson after three minutes. Upon leaving the floor, he confronted Romar, who followed Johnson to the bench. They were not exchanging Valentine’s greetings.

Romar didn’t say much about it afterward, so it wasn’t clear what happened. Johnson never returned to the game.

But if Johnson and his teammates aren’t pissed off about what’s happening, they don’t deserve to be on a Pac-12 team. Now that the Huskies seem destined to miss the NCAA tournament for a sixth consecutive season — Romar is the only coach among the biggest conferences to have survived five years of such lengthy bleakness — he addressed the question of his dismissal that is being sought by many outside the program.

“That has not been indicated to me by the people I work for,” Romar said. “At the same time, as head basketball coach, or as a leader, it all stops and ends with the leader. If the job is not getting done, then the leader has to own up to it. I’m owning up to it.”

That at least indicated self-awareness. But then he amended the remarks with a “however . . .” that explained how he rebuilt the program after numerous players transferred out in 2015, but was blindsided by the one-and-done careers of Dejounte Murray and Marquese Chriss, both NBA draftees.

“You lose two of them, you’re kind of starting all over, but you take a couple steps back,” he said. Then he talked up the incoming class partly by throwing under the bus his current players who weren’t Fultz.

“These (2017 recruits) are more equipped to come in right away and help you,” he said. “This year we’ve had guys that were not key players, but were key role players, that have been asked to step in and become key scorers.”

But that sort of churn is the way it is with every program in the 11 years since one-and-done became the rule forced on colleges by the NBA. Romar hasn’t adapted.

Perhaps the most damning evidence came from a recent book by longtime college hoops writer Bud Withers. Glory Hounds that explores the ability of Gonzaga, the nation’s top-ranked team, to sustain its excellence.

Withers interviewed Nigel Williams-Goss, who transferred from Washington in the 2015 exodus, sat out a season, and now, as a 6-3 junior guard, leads the Bulldogs in scoring, assists and steals and is second in rebounding.

“I felt after my freshman year, a lot of the things we had talked about (that) were going to change going into my sophomore year, I didn’t see a lot of that change happening,” Williams-Goss told Withers. “It’s one thing, I feel like, to lose, but it’s another thing when you’re not doing everything in your power, or your capability, as far as preparation in trying to win. I just felt there were a lot of stones left unturned before games, and stuff like that. I had talked to past players, where they kind of had similar experiences . . . I just felt it was best for me to move on.”

Saturday’s game certainly was a talent mismatch, but it also seemed as if the Huskies had little plan and less gumption to execute it. Nothing in their play suggested anything had changed from the time Williams-Goss was at Montlake.

“I haven’t done a good enough job to get us to turn the page,” Romar said Saturday. “We’ve talked to our team about that: ‘We’re coming close.’  But if you ever get to a point where you take a step back mentally, it can get a lot worse. It got a lot worse tonight.”

The recruiting class with Porter sounds appealing. But the same anticipation was apparent for Williams-Goss, Murray, Chriss and Fultz.

Maybe Romar needs to hire back his former assistant, Ken Bone, who from 2002-05 dialed up a lot of success for the Huskies.

Oh, wait. He joined Gonzaga too, sitting next to Mark Few, whose Bulldogs beat the Huskies 98-71.

So the search continues for a corner in the round room.