After falling 34-28 in overtime, Falcons coach Dan Quinn had the distinct displeasure of losing Super Bowls twice to the remorseless of Patriots QB Tom Brady, who led insufferable New England to another title. 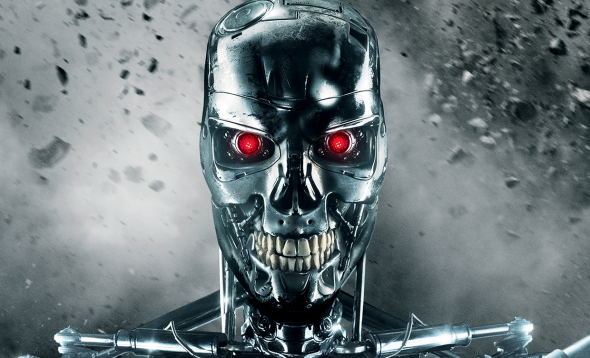 TB12, the original class of Terminator weapon, was in use Sunday night in Houston. / Skynet

As Tom Brady remorselessly ran down the Atlanta Falcons Sunday night in Houston, I kept thinking about Kyle Reese’s cinematic soliloquy to Sarah Connor regarding The Terminator that was pursuing her and son John:

Poor Dan Quinn. The Terminator got him twice at the Super Bowl.

The first time, when he was with the Seahawks as defensive coordinator, Quinn was ahead 24-14 in Phoenix. The second time, as head coach of the Falcons, he was ahead 28-3 in Houston.

Two years ago against one of the greatest defenses in NFL history, Brady completed 13 of his final 15 fourth-quarter passes, including two touchdowns. Sunday, in a deeper hole,  he completed 10 of his final 12, scoring TDs on the final four possessions.

“That’s a hard one for us,” Quinn said Sunday. “There’s no place to put that one.”

Actually, there is. Right next to the other hole in his soul.

Most certainly, he did it to spite Commissioner Roger Goodell, judge and jury in Deflategate, as well as millions of fans across America who have grown to sports-hate him and everything about the Patriots, their rules-bending, their success and their general insufferability.

And he did it to Atlanta. Poor Atlanta.

The city has had teams in all four major U.S. team sports. It hosted an Olympics, as well as myriad other national pro and college championships in numerous sports. In January, it even hosted the University of Washington football team one weekend, then the Seahawks the next weekend.

For all that, Atlanta has owned one major team championship — the Braves won the World Series in 1995, the year the Mariners saved baseball in Seattle with their first six weeks of good ball. In 51 years in the NFL, this was only the Falcons’ second Super Bowl appearance. They were clocked by the Denver Broncos in that one 18 years ago.

Until the arrival of Pete Carroll and Russell Wilson, Seattle could relate to the pathos.

After the Falcons ended Seattle’s season with a dominant 36-20 playoff win, most Seahawks fans respected the fact that Quinn — to leap to another sci-fi metaphor — was the young Jedi who learned much under Seattle’s Yoda, and the better team, he had.

For three quarters Sunday, Quinn had the better team too. The Falcons flirted with a rout similar to what the Seahawks put on the Broncos two years ago, won 43-8.  Instead, Brady’s eyes glowed red, leading four consecutive scoring drives.

The final came in overtime. After winning the coin flip — of course — Brady moved the Pats 75 yards in eight plays for the sudden-death TD in overtime that denied the Falcons even a chance at the ball.

From a Seattle perspective, the way the Falcons fell — cruel dissolution of a certain victory —  evoked a distinct shudder. The Seahawks’ 28-24 loss to the Pats in Super Bowl XLIX was more abrupt, an interception of what likely would have been the winning touchdown in the final seconds

But the wound was identical to what the Falcons have now — a seeping sore, a  reminder of a chance squandered to beat The Terminator.

“It hurts,” said Falcons LB Deion Jones. “This is definitely a feeling I won’t forget.”

Young Mr. Jones, you have no idea.