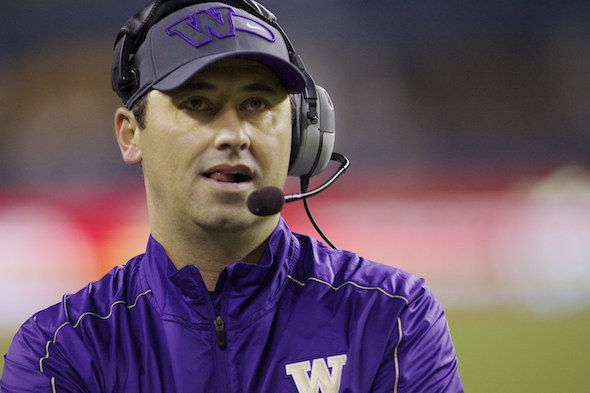 The Atlanta Falcons Tuesday agreed to terms with Steve Sarkisian to become their offensive coordinator, replacing Kyle Shanahan, who took the head coaching job for the San Francisco 49ers Monday. Sarkisian, head coach at the University of Washington from 2009-13, served as Alabama’s OC in the national championship game against Clemson after replacing Lane Kiffin.

Hired by Nick Saban to serve as a special “offensive analyst” last year, Sarkisian became Alabama’s OC just before the Tide’s 35-31 loss to Tigers in the title game when Saban ousted Kiffin, who earlier agreed to coach Florida Atlantic. Sarkisian was expected to stay with Alabama, but Shanahan’s move to San Francisco created an opportunity for Sarkisian to coach the NFL’s top-rated offense.

Sarkisian has a personal relationship with Atlanta head coach Dan Quinn. According to ESPN and the Washington Post, Sarkisian visited with Quinn at the Falcons’ training camp in August and spent time with Quinn during his hiatus from football.

Sarkisian took over the Huskies following their 0-12 pratfall in 2008 and coached them to four bowl games and a 34-29 record. He then became head coach at USC in 2014, but was fired in mid-2015 for being drunk at university events. He was set to become an analyst at Fox Sports 1 when Saban brought him to Alabama in 2016 in an analyst position that meant he could have no contact with players.

Sarkisian has only one year of NFL experience, having served as quarterbacks coach of the Oakland Raiders in 2004. Former Oregon and 49ers coach Chip Kelly was also a candidate to replace Shanahan.

Quinn and Sarkisian are former assistants under Seahawks coach Pete Carroll. Sarkisian was on Carroll’s staff from 2001-03, then 2005-08, while Quinn was Seahawks defensive coordinator in 2013-14.

“We appreciate all Coach Sarkisian did for our program during his time here. He is an outstanding coach, and we wish him the best in his new role as Atlanta’s offensive coordinator. As always, when we have an opening on our staff, we will use it as an opportunity to go out and hire the best coach available.”

Names surfacing as a possible replacement at Alabama include two former head coaches at Oregon, Chip Kelly and Mark Helfrich.