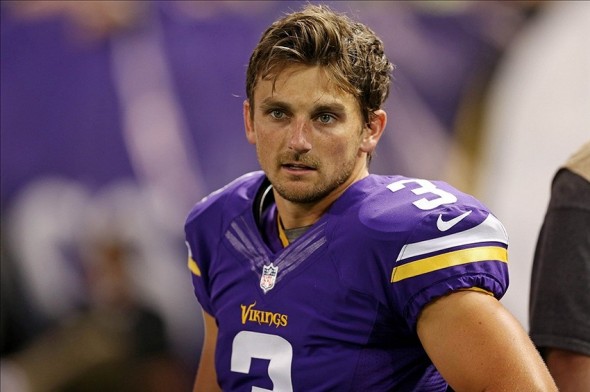 Blair Walsh missed the short field goal that gave the Seahawks a 10-9 playoff  win over the Vikings. / Minnesota Vikings

Walsh, 27, is a big footnote in Seahawks’ history. He missed what would have been a game-winning, 27-yard field goal attempt in the 2015 playoffs with 22 seconds left that enabled Seattle to escape with a 10-9 win.

The Vikings selected Walsh in the sixth round of the 2012 draft out of the University of Georgia. In his time in Minnesota, he made 133 of 158 field-goal tries and 156 of 165 PATs. He was first-team All-Pro in 2012 after making 35 of 38 field goals and all 36 of his PATs. During his career, he was NFC Special Teams Player of the Week five times.

After his rookie year, when he made 92.1 percent of his field goal attempts, Walsh’s percentage dropped dramatically the next two seasons, bottoming at 74.3 percent in 2014. When the Vikings cut him, he had made 12 of 16 field goals.

Hauschka, who signed with Seattle in 2011, missed four field goals in 2016 and a career- and league-high six extra point attempts. Six of his 10 missed kicks were blocked. Most glaringly, Hauschka, 31, shanked a 27-yard field goal try at Arizona in Week 7 that would have given Seattle a victory. The 6-6 tie ultimately cost the Seahawks the No. 2 NFC playoff seed.

Hauschka, who completed a three-year contract that guaranteed him $8.3 million, including $2.7 million last season, kicked 175 field goals (out of 197) and 271 extra points for Seattle, scoring 759 points.