Huskies worst team to feature next No. 1 draftee

Markelle Fultz seems primed to become the No. 1 pick in June’s NBA draft. If that happens, Fultz will have played on the worst college team ever to feature an impending No. 1. 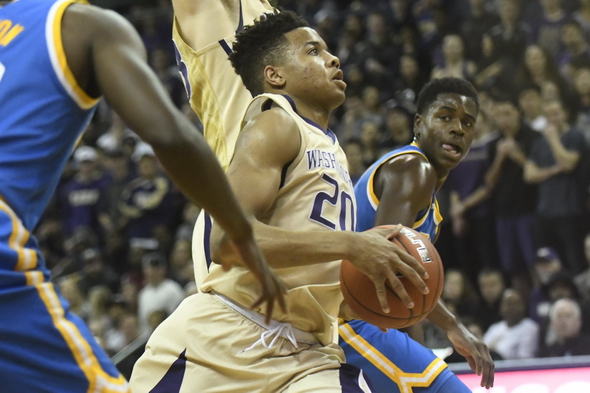 According to the majority of NBA mock drafts, including these published by ESPN, CBSSports.com, Yahoo, Hoops Hype and nbadraft.net, Washington freshman Markell Fultz will, in late June, become the first pick, by the Boston Celtics. The Huskies have had 15 players taken in round one, including Bob Houbregs at No. 3 in 1953, but have never had a player selected first overall.

Eleven Huskies have been drafted in the first round in the Lorenzo Romar era (since 2002), including Brandon Roy at No. 6 overall in 2007. In 2012 (Terrence Ross, Tony Wroten) and 2016 (Marquese Chriss, Dejounte Murray), two Huskies went in the first round.

So if the mocks are correct, and in the NBA they usually are, Fultz will make some local history. At the same time, so will Washington, although not in a positive way.

Fultz, who missed Washington’s last two games due to a sore knee, is the leading scorer (23.2) in the Pac-12 and the only player in the NCAA averaging 20+ points, five-plus rebounds and five-plus assists. He is also on track to finish with the highest scoring average by a conference player since Cal’s Ed Gray averaged 24.8 in 1996-97.

Fultz has done this on a Washington team that has lost 16 of its 25 games, including an 85-61 setback at Utah Saturday, and will miss the NCAA Tournament for the sixth consecutive season. No breaking news there, but let’s take a short dive into NBA draft history.

It dates to 1947. From then through 1965, many of the drafts included “territorial picks,” in which teams, in an effort to boost attendance, were permitted to select premier local players ahead of the first round.

In 1962, for example, the Cincinnati Royals took Jerry Lucas from nearby Ohio State while the Detroit Pistons selected Dave DeBusschere of the University of Detroit as territorial picks. Then the Chicago Zephrys (now the Washington Wizards) took Utah’s Billy McGill as the official No. 1 overall pick.

The NCAA eliminated territorial picks in 1966. From then until now, the No. 1 overall has overwhelmingly emerged from an elite college program. Twelve came from teams that had won 30 or more games. Example: Elton Brand’s 1998-99 Duke Blue Devils went 37-2 before the Chicago Bulls made him No. 1 overall. Another 11 came from teams that won between 25-29 games. Example: Kareem Abdul-Jabbar’s 1968-69 UCLA Bruins went 29-1 before the Milwaukee Bucks made him the No. 1 overall in 1969.

Of the 51 No.1s since Cazzie Russell of Michigan in 1966, 38 played on college teams that won 20 or more games (74.5 percent), while five others skipped college basketball altogether.

On the flip side, only three No. 1s came from teams that had losing records. Assuming the Celtics take Fultz in that spot, he will have played on the worst team, by total losses and winning percentage, ever to feature an impending top pick.

Number ones who played their final college season on the worst teams:

Given how horridly the Huskies have performed, they easily could wind up with 20-plus defeats and, in fact, may have no more wins in them. They have five Pac-12 games remaining, all against teams that have already defeated them this season.

Washington could hold the “record” for worst team performance by a school featuring the next No. 1 pick for, well, decades.