Mariners spring training is underway with multiple storylines, some to like, some not so much. But was it really necessary to mess with Poseidon, the Greek god of bad baseball teams? 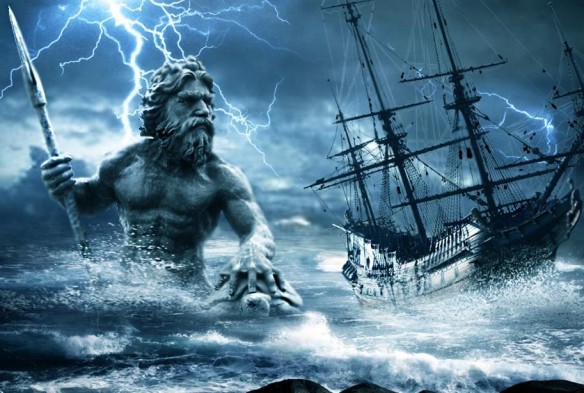 Poseidon, a power-hitting right-handed bat from Athens, could be a formidable adversary this season for the Mariners.

Bookmaker Bovada in Las Vegas set the line Nov. 3 for the Mariners to win the 2017 World Series at 25/1. Updated odds this week show Seattle slipped to 33/1, which is a four-way tie for 13th with Baltimore, Kansas City and Detroit. As you may recall, only 10 MLB teams make the post-season.

Spring training is starting just this week, and already the Mariners are backsliding.

That doesn’t seem fair. Then again, for a team 15 years gone from the playoffs, respect is more elusive than a valentine from Charles Oakley to Knicks owner James Dolan.

Even though Jerry Dipoto generally won praise in his first year as general manager for creating a 10-game improvement to 86 wins — he predicted a mid-80s finish in spring training — the position-player roster was pickled with single-year temps (Adam Lind, Dae-Ho Lee, Chris Iannetta, Nori Aoki) and a club-record 31 pitchers, some of whom weren’t around long enough to say that they got smarter by staying in a Holiday Inn Express hotel.

For Scott Servais, who never managed at any level before getting the Mariners gig, the bewildering churn made him into Margaret Dumont when Groucho Marx introduced himself: “Hello, I must be going now.”

From a franchise management standpoint, it must be said that the club is out of excuses for the first time in nearly 20 years. No Howard Lincoln. No Chuck Armstrong. No mid-market revenue palaver (the 2016 payroll was a club-record $154 million, and the execs could still light cigars with $100 bills).

They have a new/old owner, John Stanton, who’s fully engaged but not so full of himself that he’s pulling an Arte Moreno.

The bullpen is no longer a League of Ordinary Gentlemen — Since none of its members are Fernando Rodney or Mayckol Guiape (journalists will charge his parents with felony misnaming), bonus points are already granted.

Bullpens are almost always a crapshoot, and Dipoto blew on a lot of dice last season. This time, there are no final-fumes guys like Joaquin Benoit and Joel Peralta. Instead, they have guys with full tanks, starting with closer phenom Edwin Diaz, whose June 4 call-up from AA was Dipoto’s boldest, best move of the season. Diaz is hardly a finished product, but if his slider is as dominant as his 100-mph fastball, it won’t matter much.

The pen has three competent guys back from long stays on the 2016 disabled list in Tony Zych, Evan Scribner and Ryan Cook. Steve Cishek will be back probably by early April after rehabbing from hip surgery.

Add a steady holdover, Nick Vincent, plus another good-looking rookie called up from AA in September, Dan Altavilla, and the Mariners have seven guys they know from last season, even if Vincent is the only one among them on the 2016 opening day roster.

But feel free to rue the trade-deadline day in July that Dipoto traded away Mike Montgomery to what became the world champion Cubs.

Baserunning will no longer resemble an upright piano going down five flights of stairs — Funny as it was, Korean slugger Lee’s attempt to run the bases was something that children should never see. The Mariners stole 56 bases, fourth-fewest in MLB, evidence of the single-biggest skill bust in Dipoto’s roster.

The additions via trade of Jarrod Dyson from Kansas City and rookie Mitch Haniger from Arizona add speed on the basepaths and the outfield.  Dyson, longtime fourth outfielder with the Royals, is booked to start in left and hit leadoff, and Haniger will start in right. Along with CF Leonys Martin, the Mariners finally have an athletic outfield that should win a handful of games purely on catching balls in gaps and down the lines that are still rolling from last season.

The long regional nightmare at shortstop is over — The Mariners have given MLB everything at short from Alex Rodriguez, arguably the game’s most complete player (go ahead, argue) to Mario Mendoza, for whom the Mendoza Line was named, for all the players who started nearly entire seasons despite hitting .200 or worse.

In the past 10 years, the Mariners have deployed in their opening-day lineup Yuniesky Betancourt (a four-year starter), Jack Wilson, Brendan Ryan (a three-year starter), Brad Miller and Ketel Marte. None were terrible, some had singular gifts, but none moved the Mariners toward contention.

Jean Segura does that. Arriving with Haniger in the trade that sent Taijuan Walker and Marte to the D-backs, he had a 5.7 WAR and is the best position-player arrival since Cano. Barring injury, the Cano/Segura/Kyle Seager infield trio is one of the best in MLB.

Fifi iffy — The Mariners have committed half the payroll,  more than $76 million, to four players: Felix Hernandez ($26.9 million), Robinson Cano ($24M), Nelson Cruz ($14.3M) and Seager ($11M). Lopsided payrolls are not unusual in MLB, but the guys pulling the large coin have to perform at least to their career averages, or the rest of the lineup is forced to over-compensate for skills none have.

Hernandez, based purely on hard miles driven, is the most likely of the four to be the flat tire. At 31 in April with more than 2,400 MLB innings, Hernandez had multiple episodes of falling off the edge of the earth in 2016. He simply lost command of his pitches, and that was before he injured his calf and missed seven weeks.

Reports are that he has undergone rigorous workouts in the off-season. Dipoto and Servais have been equally rigorous in defending the staff ace and local hero.  Then again, what else could all three have done or said?

Hernandez can still be a good pitcher, but don’t expect him to summon his old self but a few times this season. That leaves Hisashi Iwakuma and James Paxton to carry a load they’ve never carried in the majors. Newcomers Drew Smyly and Yovani Gallardo are upgrades from Wade Miley and Nathan Karns, but not enough to fill the void of acelessness.

Year five of the trials of Mike Zunino  — The catcher of the future/present looked good upon his 2016 return from a seasonal start in AAA Tacoma, then reverted to old batting habits in the final six weeks. He’s still an above average defender and pitcher handler, but there’s a reason the Mariners wanted a stout veteran backup in 38-year-old Carlos Ruiz.

To see Zunino in the Dustin Ackley/Justin Smoak/Jesus Montero dustbin of failed potential would be agonizing.

The trident in the resurrected logo is pointing down, not up — A warning, Mariners: Do not mess with Poseidon. The Greek god of the sea did not take well to misuse of his weapon in the club’s first use of the logo from 1977-86.

After 15 years without playoffs, and zero World Series appearances, there is no need for a maritime community to mock the cosmos.

Still wonder why the bookies changed the odds after the logo was revealed?