Washington was within three points of No. 5 Arizona with under four minutes to play, but couldn’t catch a break and went down 76-68, their ninth consecutive defeat. 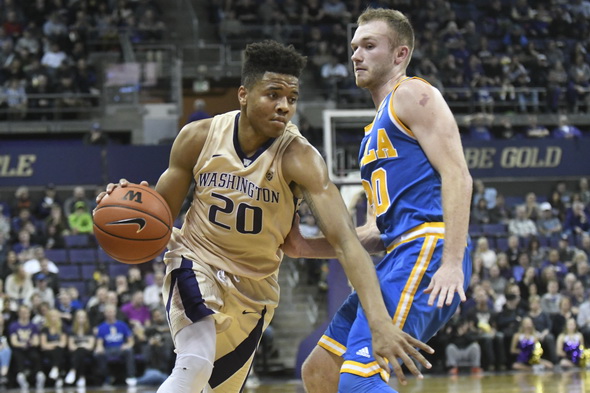 The Huskies had a one-possession game on their hands with under four minutes to play but failed to catch a break, missing out on the upset of the season against No. 5 Arizona Saturday. The Pac-12 Conference leader sent Washington to its ninth consecutive loss, 76-68, in UW’s final home game of the season (box).

As fans filed up the stairs at game’s end, Huskies coach Lorenzo Romar grabbed the PA microphone, stopping the crowd to thank them for their attendance and support despite the team’s record.

Whistles hurt the Huskies late. Carlos Johnson had a layup wiped out by a charging call, and less than a minute later was rung up for offensive basket interference when he tried to tip in a ball sitting on the rim. On the defensive end, Noah Dickerson absorbed contact from Allonzo Trier but was called for a blocking foul, despite claims that Trier lowered his shoulder into the collision.

For Romar, the missed shots and unlucky bounces were just the vicissitudes of the basketball gods.

“Anytime you’re competing at a high level, it’s frustrating when it doesn’t go your way,” he said. “That’s part of basketball, that’s part of sports, the ebbs and flows of the game. That’s why you have to be mentally tough.

The lift showed. The generously measured six-foot-one guard David Crisp won a rebound over the head of Chance Comanche, 10 inches taller. Dickerson battled under the boards, scoring 14 points in the paint and snagging nine rebounds.

Malik Dime played his first game since breaking a finger against Oregon State Jan. 7, as well as ending a suspension for slapping a Colorado fan in Boulder Feb. 10. Coming off the bench, Dime scored only two points, but made a defensive impression in his final game at Hec Ed with four blocks and a steal.

Markelle Fultz remained the star, 7-of-16 from the field for 26 points and six assists, though he missed five of his 15 free-throw attempts.

Romar refused to say whether Fultz was leaving the program for the NBA at season’s end, saying any comment would get blown out of proportion. He did, however, praise the freshman’s contributions.

“He has been totally invested . . . The ‘pressure’ comments people have made about him because we haven’t won, (saying) ‘it’s his fault’ – he has done everything imaginable to help our team.”