Developer Chris Hansen says he’s not been blacklisted by the NBA, nor will he be short of partners to complete his Sodo arena plan. But he would like the Port of Seattle to see his project as part of the solution. 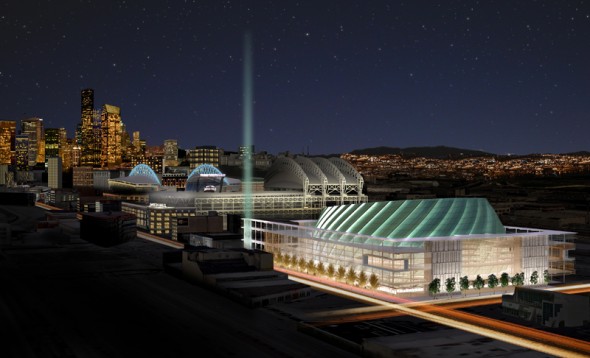 Chris Hansen says the facts and projections used by the Port of Seattle to temporarily halt his arena project weren’t accurate. / 360 Architects

Ever since Steve Ballmer bolted from their partnership in 2014 to buy the Los Angeles Clippers for a still-astonishing $2 billion, Chris Hansen and his plan for an arena that would bring back the NBA to Seattle has been dogged by two questions about his own status:

Does he have the resources to pull off purchasing a team as well as privately funding construction of a first-class arena?

Even if he does, will the NBA/NHL grant him a franchise, particularly after the dubious deeds following the NBA’s denial of relocating the Kings from Sacramento to Seattle?

So, during a one-on-one interview with me last week, the topics were fair game.

The notion of Hansen being blacklisted by the NBA has come up in my conversations with city officials, particularly after Ed Murray succeeded Mike McGinn, with whom Hansen struck a deal for an arena proposal in Sodo in 2012, as Seattle mayor.

Unsurprisingly, Hansen was adamant in his denial.

“Nothing could be further from the truth,” he said. “We’ve talked to plenty of owners. We’ve always had a good dialogue with (NBA commissioner) Adam Silver. He’s made public comments.

“Something worth considering is that all of us in our group (including brothers Peter and Erik Nordstrom and Seahawks QB Russell Wilson) want to bring the NBA back to Seattle. The easiest argument against (the blacklist claim) is, we would welcome in any new owner the NBA wants. None of us has insisted that he has to be a majority owner. We would never stand in the way of bringing the NBA back to Seattle.  (Majority ownership) is a second, third or fourth consideration among all of us.

“That whole (blacklist) issue is moot if we don’t have a place to play.”

Pro sports leagues vet potential owners fairly thoroughly before purchase, sometimes even before names surface publicly. If the investigations reveal a dubious history with, say, illegal gambling or organized crime, quiet ways are found to inform the subject, to avoid public embarrassment, that he would not qualify for ownership.

So the fact that Hansen paid a $50,000 fine in 2013 for attempting to meddle in the anti-arena campaign in Sacramento and is still talking to NBA officials suggests that he has not been dismissed from consideration. Particularly since he owned up to the mistake and apologized.

But it is also true that while costs for sports teams and construction continue to rise, Hansen’s personal fortunes have taken a knock, according to finance-industry stories such as this one in Fortune about about his hedge-fund operations.

Leagues can and often have denied a potential owner on the basis of wealth insufficient to own and operate a franchise successfully.

Asked if he had the required resources, Hansen said, “There are very few people in the world right now who can write a billion-dollar-plus check to own a pro sports franchise and arena. That’s why consortiums come together. We will likely have additional partners.

“If a team comes up for auction, and someone wants to pay more than we do (for a team in Seattle), we will gladly partner with them, and give them a place to play. We won’t put our individual ownership aspirations above getting a team.”

“Whenever there’s been an auction, there’s never been a shortage of potential partners who show up,” he said. “They come together at the very last second, swapping people in and out. Our job is not to figure out those details now.

“That should be among the least of the city’s concerns.”

What about the virtue in finding a large investor now and identifying him publicly in order to allay skepticism?

The proposed arena’s location in Sodo will not be disrupting residental neighborhoods. / King County

“If I asked you to buy a house, but I didn’t tell you where it was, or how much it cost, or when you could buy it, would you do it?” Hansen said. “Partners show up when there’s something to buy. It tackles a real special person to show up and undergo the scrutiny if he doesn’t know all those things.”

Hansen also said he seeks partners who have a civic conscience about Seattle.

“Our group is doing this for civic reasons,” Hansen said. “Those are the kind of partners we’re looking for, including Russell. Civically minded. They’re not just focused on (return on investment).

“I’m looking for someone who says, ‘I’m going to put my money in now, and the price is going to be what it’s going to be. I’m willing to be patient until it gets done.'”

With those kind of parameters, Hansen is probably looking at a small pool of qualified investors. Which makes his revised Sodo arena proposal that eliminates a previous request for some public funding help, an even riskier proposition.

Why make the investment more difficult?

Hansen cited two reasons: The discomfort electeds and taxpayers had with contributing to another sports palace, and more favorable market conditions than in 2012 for his proposal at $490 million.

“There was under-the-surface concern by everybody in politics,” he said, “and probably all taxpayers in general, that civic involvement in an arena makes people more uncomfortable. Even though I strongly believe that the original deal would have resulted in incremental taxes going to the city, it’s complicated. People hear (public funding) and turn off.

“So we can we use this opportunity to reclaim the moral high ground, if you will — something that is seen as an example of doing something right for any city. That’s exciting.”

By way of comparison, the newest NBA arena, the Golden 1 Center in Sacramento, had a $255 million public subsidy for an arena that was budgeted to cost $447 million when the city council approved construction in 2013. The building opened to rave reviews in September at a cost of $588.2 million, the overruns covered by ownership.

Current and potential partners of Hansen have to understand the risk is all private. But that kind of prospect is where Hansen makes a living in his day job.

“Any project depends on two things: The revenues and profitability of doing business — in this case, owning a team and arena — and the ability to finance that, and the cost of that financing,” he said. “One thing that’s very clear, partially reflected in the costs of an NBA team, is that the revenues and (financial) outlook for NBA franchises have improved from 2011 to 2017.

“We have a new TV contract and a new collective bargaining agreement that contributes to stability — we know what expenses will look like the next five-six years — that means a greater ability to service the financing costs.”

The market has also changed for lenders.

“In 2011, we were just two years removed from the financial crisis,” he said. “The capital markets weren’t looking as favorably upon arenas and NBA teams. It wasn’t just sports; a lot of institutions were burned in large projects. That has really changed.”

If Hansen has grown comfortable with the NBA’s health and his degree of risk, he still remains irked at his project’s primary opponent, the Port of Seattle.

Despite Hansen’s improved proposal and better market conditions, his project still sits at the doorstep of the port, whose pleadings before the city council about potential job losses from the arena’s increase in traffic probably was decisive in the 5-4 vote in May that denied the vacation of Occidental Avenue.

Hansen believes that the port had its way based on facts about its container business and Sodo traffic patterns that weren’t accurate.

“It’s been strange to me that people have not held the port accountable for the invalid facts and projections that they have put forward over the last three or four years,” he said. “If you look at the original council hearings for the projections they made for container traffic for (terminal 46), and opening up second shifts, they’ve missed their projections by such a wide mark.

“It’s either amusing, or like someone is not very good at their job. When you claim container traffic is growing at 30 percent a year for four or five years and it’s going to put a huge traffic strain on the area . . . We own all these buildings around here and I can tell you as a landlord, there’s very minimal traffic on any of the streets after 6 p.m. Not just freight. Any traffic, period.”

Rather than be a source of congestion, Hansen thinks his project can help. He cited one example: Under his arena plan, traffic exiting the Mariners garage (which is used by the Seahawks as well as the  general public on non-game days) could be routed behind the arena on its east side to Holgate Street, rather than onto Massachusetts Street and First Avenue South, where cars must work through pedestrian traffic.

“We think we can help a lot of things, and are happy to do that,” he said. “But how can you improve freight mobility at 7 or 8 p.m., when there’s no freight? Some of this is just posturing to defend a point of view that is not fact-based analysis.”

If the Lander Street overpass gets fully funded — it has commitments of $100 million of the $140 million cost, with another $20 million potentially coming from the proceeds of the sale of Occidental to Hansen — the port will have a significant solution to its long-time Sodo bottleneck. If the port recognizes the opportunity, the situation could be win-win. Hansen has no plan to hold a grudge.

“When we get our arena plan approved, we want to be good neighbors to everyone there,” her said. “We think there’s more to be done with mass transportation and additional parking.

“But there hasn’t been much discussion to find a solution. It’s just, ‘We’re opposed.'”

For a city that had no good choices in 2008 when it came to keeping the Sonics, 2017 appears to have brought three bidders with privately funded solutions for a premier arena. Upgrading Seattle Center is always a civic priority; that doesn’t create a mandate to screw up a grander opportunity.