Thiel: ‘Whatever it takes.’ Do the Mariners know?

The Mariners have adopted an in-house slogan, “Whatever It Takes.” How would they know? It’s been 15 years since the playoffs. But it’s OK as long they’re not using PEDs, and Jerry Dipoto avoids it. 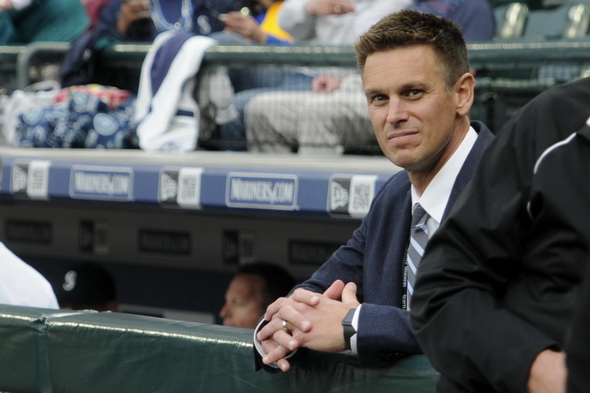 GM Jerry Dipoto has a win-now plan for 2017, but there should be limits. / Alan Chitlik, Sportspress Northwest

Festooned within the Mariners’ spring training complex in Phoenix’s strip-mall suburban sprawl is a motivational slogan tacked upon numerous empty spaces on walls:

Manager Scott Servais came up with it, but I’m not sure I’m down with it.

I get what Servais is after: An exhortation to commitment and sacrifice. The Seahawks have a similar slogan positioned above doorways and tapped by players and coaches as they pass under: “I’m in.”

“We’ve got to stay on the process,” he told the Associated Press last week. “It’s controlling the zone. It’s how we play. If you stay with that, the results kind of take care of themselves. Chasing the numbers of wins, chasing your ERA, chasing how many homers, that stuff, it takes care of itself.

“Pressure’s a privilege. Expectations are great. They should be. That’s what we’re shooting for. That’s what (general manager Jerry Dipoto) spent all off-season working on, was to get our team a little bit better. It’s a good thing.”

Apparently the slogan stemmed from falling short of the playoffs last season by a couple of games, which inevitably results in lamentations over the one or two losses among 76 that could have been averted with a little more attention and concentration.

“We came up short, so we’ll make sure this year we can be on top and clinch early,” DH Nelson Cruz told AP. “Sometimes you have to leave your comfort zone. If that means I have to hit a ground ball to second base, whatever it takes. If you have to take one for the team, you take it. You have to go out there every day and compete and just find a way to get it done.”

So, yeah. Whatever it takes. But this remains the Mariners, 15 years out of the playoffs. Collectively, they don’t know what it takes.

Sure, Cruz and 2B Robinson Cano have played on winners elsewhere. Getting a guy like backup C Carlos Ruiz, who has been in 12 playoff series and 53 post-season games is worth having, even at 38.

But this team has been to the edge twice in the past three years and crapped out in the late going.

When I hear someone say, “I’ll do whatever it takes,” I tend to think of Richard Nixon and the Watergate burglars. Or Michael Corleone eyeing his brother, Fredo. Or Andrew Dice Clay needing to shut up a heckler.

In baseball, I imagine Ty Cobb sharpening his spikes. Gaylord Perry reaching for a gob of Vaseline in his belt. Barry Bonds picking up “flaxseed oil” at the Balco clinic. Sammy Sosa corking his bat.

Or Dana Carvey and Kevin Nealon having their arms pulled off by weights after offering to “pump you up.”

Maybe it’s just me, but “whatever it takes” is what The Joker says when he has Batman in a bad way. It’s sinister.

I’m sure Servais didn’t put much thought into the odious connotation of the slogan. And while I don’t think the Mariners’ clubhouse in Peoria has a secret room full of syringes, files, Vaseline and corks, it’s possible that “whatever it takes” also includes the urgency to make the playoffs this season will cause foolishness at or before the trade deadline.

That is the period in the baseball calendar when owners and GMs desperate for relevance/contention/love/revenue tend to panic. They ransack the farm system for top prospects and trade them for veterans who they believe can deliver with the required urgency.

That isn’t to say that is wrong or bad — the Mariners wouldn’t have made the 1995 playoffs without the midseason acquisitions of RHP Andy Benes and OF Vince Coleman — but the consequences to a farm system as anemic as the Mariners’ could be crippling.

Dipoto and director of player development Andy McKay were aghast a year ago at the farm-system inventory. They were spot-on in emphasizing player development at all levels of the system, including the hiring of coaches who get how to implement the “control the zone” mantra that improves efficiency for pitchers and hitters.

In their often-languid history, the Mariners, up to and including the tenure of Jack Zduriencik as GM, have done a respectable job of finding and drafting MLB-level talent. But having such a teensy percentage turn into six-year major leaguers is evidence that they lacked the necessaries to create average ballplayers — unless you’re impressed with four playoff appearances in 40 years.

So when the Mariners do acquire/develop some premier prospects such as position players Mitch Haniger,  Tyler O’Neill,  Kyle Lewis and Drew Jackson, and pitchers Edwin Diaz, Andrew Moore, Thyago Vieira and Luiz Gohara, 2017 is not necessarily the time to fondle the panic button.

Which is implied by “Whatever It Takes.”

Dipoto strikes me as a guy not especially vulnerable to impulse. If he were, ahead of the 2016 trade deadline, he wouldn’t have traded a quality major league pitcher, Mike Montgomery, for a young, unproven first baseman, Dan Vogelbach. I’ve written before the move probably the cost the Mariners a playoff spot because there was so much instability among pitchers (a club-record 31 were used).

But if Vogelbach helps justify the deal with a solid platoon performance in 2017, the deal works. If he flops in his rookie season, then Dipoto is back to playing catch-up at a position he sought to settle with Vogelbach and Danny Valencia, 32, now with his seventh major league club because he can’t hit right-handed pitching.

Giving up a potential young star to fix first base would fulfill the “whatever it takes” slogan, but wouldn’t do anything for the future. Yes, it’s been 15 years since the playoffs, but Dipoto would be wise to ignore the clubhouse signage.

Mariners fans should hope the message isn’t for him. After 15 years, a 16th year would harm no one if unsentimental actions are the path to annual contention, as the Seahawks have established. Because this team has yet to know what it takes.