The University of Washington’s Kelsey Plum is on the verge of accomplishing one of the greatest career feats in state sports history. Where do you rank her imminent accomplishment? 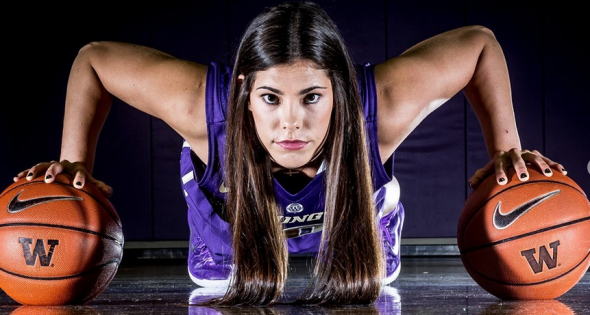 Kelsey Plum is upon one of the great feats in state sports history. / gohuskies.com

In 2009, Art Thiel, Mike Gastineau and I published “The Great Book of Seattle Sports Lists,” in which we ranked, from 10 through one, Washington state’s “Most Impressive Record Breakers.” If we were to re-do that list today, it would require a major update: The inclusion of the University of Washington’s Kelsey Plum, who is on the verge of becoming the all-time NCAA Division I women’s basketball scoring leader.

The Pac-12 Conference tournament begins its annual March 2-5 at KeyArena, where the Huskies are almost certain to be among the top four seeds that draw a first-round bye. If Plum hasn’t broken Stiles’ record by then, she’s likely to do so Friday, March 3.

A year ago, Plum averaged 25.9 points (topped the Pac-12, fourth in the nation) in leading Washington to its first appearance in the Final Four. She was a semifinalist for the Naismith and Wooden awards, as she is this year. A brief summary of her career:

If Plum wins the national scoring title – she has a 5.7 ppg lead on Jennie Simms of Old Dominion – and if teammate Chantel Osahor, averaging 14.9, takes the rebounding title – she has a 2.5 rpg lead on G’Mrice Davis of Fordham – Washington becomes the first school in women’s history to feature teammates taking those individual titles.

Plum, also 42 away from breaking Lauri Bauman’s (Drake) 32-year-old NCAA record for career free throws made, has not scored fewer than 21 points in any of Washington’s 29 games this season. She has topped 30 14 times and 40 four times. Osahor recorded the first triple double in UW history Nov. 22 vs. Idaho (11 points, 21 rebounds, 10 assists) and pulled down a Pac-12 record 30 rebounds against Washington State Jan. 22.

But it’s Plum who rates a spot on our list of Most Impressive Record Breakers, which follows:

10. Brian Sternberg’s three world records, 1963.  A 1961 graduate of Seattle’s Shoreline High, Sternberg set the world record in the pole vault three times in 1963, including a top clearance of 16-8 at the Compton Relays, making him the only state athlete since World War II to hold a world track and field record. Sternberg was paralyzed below the neck July 2, 1963, in a trampoline accident. He passed away two years ago.

9. Shaun Alexander’s 28 touchdowns, 2005. Only three running backs in NFL history — Jim Brown, Emmitt Smith and LaDainian Tomlinson — scored touchdowns at a faster clip than Alexander, whose 28 in the Seahawks’ Super Bowl season of 2005 broke Priest Holmes’ record of 27 in 2003. Alexander held the mark only one year: Tomlinson scored 31 in 2006.

7. Jeff Jaeger’s 80 field goals, 1983-86. Jaeger not only departed the University of Washington owning the NCAA record for career field goals (he still ranks tied for second), he made 19 more three-pointers than No. 2, Chuck Nelson.

6. Doris Brown’s world cross-country titles, 1967-71. Since 1932, only two women have won the World Cross Country Championship five times, Seattle Pacific’s Doris Brown and Norway’s Grete Waitz. Brown was the first American woman to win the race in 1967 when she triumphed in Wales. She added four more victories in 1968 at Blackburn, England; in 1969 at Clydebank, Scotland; in 1970 at Frederick, Md.; and in 1971 at San Sebastian, Spain, making her the only woman to win five consecutive years.

5. Al Worley’s 14 interceptions, 1968. The remarkable thing about Worley’s record — still the top single-season total in NCAA history — is he set it playing in only 10 games. To put the mark in context, only eight other players in college football history had as many as 12 interceptions in a season (including Washington’s Bill Albrecht in 1951), despite the fact that schedules have expanded to as many as 13 games.

4. Phil Mahre’s 27 World Cup ski victories, 1976-84. The White Pass skier’s total stood as the American record for nearly a quarter of a century, until Bode Miller eclipsed it during the 2007-08 World Cup season. Mahre’s three World Cup overall titles (1981-83) also remain the most by an American.

3. Steve Largent’s Triple Crown, 1976-89. When Largent retired after 14 years with the Seahawks in 1989, his 819 pass receptions ranked No. 1 in NFL history. So did his 13,089 yards and his 100 receiving TDs. That made Largent the second receiver in NFL annals, following Don Hutson (1935-45), to retire owning the “Triple Crown” of receiving (all of Largent’s records were subsequently eclipsed by Jerry Rice).

2. John Stockton’s assists and steals, 1984-03. During his 18 seasons with the Utah Jazz, the Spokane native and Gonzaga graduate not only established NBA career records for assists (15,806) and steals (3,265), he posted five of the top six assists seasons in history, finishing his career having averaged a double-double (13.1 points and 10.5 assists per game). Stockton’s assists record in context: (1) Stockton handed out 5,483 more assists than anyone in NBA history; (2) only 33 players had more than 5,483 assists in their entire careers.

1. Ichiro’s 262 hits, 2004. Ichiro gave no indication in April that he was about to launch a season for the ages, producing just 26 hits (only three for extra bases) for a .255 average. Even after a 50-hit month of May, he tailed off again, delivering only 29 hits in June. But once the All-Star break passed, no pitcher could contain the Seattle right fielder. He had 51 hits in July and 56 in August, reaching the 200 mark before the month elapsed. Two days before the end of the season, Ichiro broke George Sisler’s 84-year-old major league record of 257. His total was 46 more than runner-up Michael Young of Texas, marking the largest differential in MLB history between the No. 1 and No. 2 hitters in a league (Ichiro went on to post 10 consecutive 200-hit seasons, two more than the previous record of eight by Willie Keeler that had stood for more than 100 years).