Thiel: Is Sherman showing us a Voldemort side?

Seahawks CB Richard Sherman confounded fans and media Monday in an interview in which he said no one cares about the truth anymore, then made up stuff to make his point. What? 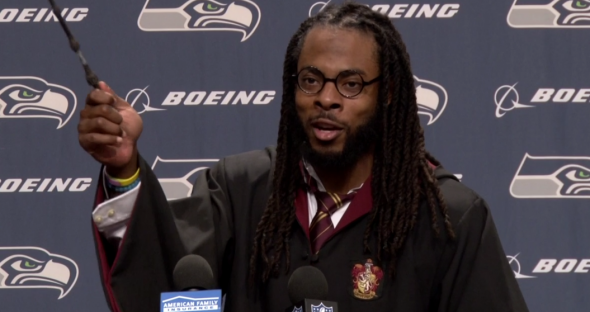 Pre-Halloween, Richard Sherman was all about Harry Potter. Now . . . / seahawks.com

I think I’ve figured out the mystery of Richard Sherman. Fans of Seahawks press conferences (12s are weird that way) may recall a pre-Halloween presser in which the Seahawks cornerback entertained the media gathering by showing up as Harry Potter, complete with round spectacles, wand and Hogwarts regalia.

Known as a Potter nerd, Sherman probably understands, as author J.K. Rowling would have it, that a part of Potter’s soul belongs to Voldemort, the Dark Lord and Potter’s arch antagonist in books and films.

So it stands to literary reason that Sherman, based on his comments in an ESPN video interview, is trying out the Voldemort side of the persona.

At least that’s the best I can manufacture to explain his claim Monday that no one heard his December exchange with radio host Jim Moore, in which he threatened to ruin Moore’s career because Sherman didn’t like Moore’s question.

The exchange happened after Sherman left the podium at Seahawks headquarters in Renton and passed by Moore, well within earshot and recording distance of perhaps 30 media members and Seahawks staff.

Despite the fact that the episode was so well-covered that Sherman, apparently on advice of Seahawks’ staffers, felt obliged a few hours later to issue an apology — via his Twitter account, he wrote, “I appreciate the role the media plays and they have a tough job. I let it get pesonal today and I regret that” — he now says there were no witnesses, just unnamed “sources.”

See for yourself:
My only other explanation is that Sherman is enhancing his resume for a job in the Trump administration.

Particularly egregious was Sherman’s interview claim that, “Nobody needs the truth anymore. Nobody cares to know what the truth is. You could just fabricate a story and go with it. Then I got to defend a fabricated story. After awhile, you just get irritated of defending stories that don’t exist.”

Unfortunately, the interviewer, Cari Champion, declined to call him out, even though her question indicated she understood the episode, which began with a question from Moore as to whether Sherman thought he had a “better handle” on playcalling than offensive coordinator Darrell Bevell.

In the game against the Rams, Sherman ranted on the sidelines at Bevell and coach Pete Carroll over calling a pass play from the one-yard line that was incomplete — an echo of the infamous failed play against New England in the Super Bowl. Post-game, Sherman defended his position, even though the Seahawks scored two plays later on a pass in the 24-3 win.

That meant he was doubling down on the indefensible. Then Sherman tripled down in the next press conference, when he offered no public contrition for the episode that became a team distraction. So that makes his Monday ESPN interview quadrupling down, a feat of rare difficulty.

Somewhere in his thinking, Sherman lost track of his conscience.

Instead of acknowledging a mistake and allowing it to be done, he’s now making stuff up, keeping alive an episode that would have dissolved, and seems to be using a tactic called “gaslighting,” in which victims are slowly brainwashed into disbelieving reality.

The irony is enough to bend light waves, because many have become acutely aware of the tactic during and after the presidential election.

This isn’t a simple case of sports trash-talk, or an emotional rant immediately after a game (the Michael Crabtree episode). This is Sherman calmly attempting to persuade the public of an alternate reality that audio and eyewitness evidence readily contradicts — and for which he apologized.

Without going too far down the road of armchair psychology, Sherman’s erratic behavior last season, which included two separate in-game episodes of public confrontations with coaches, was enough to prompt at least two meetings between Sherman and Carroll, the second on exit day after the season.

I asked Carroll if he agreed with Stanford coach David Shaw’s observation to si.com Jan. 5 — one that Sherman himself said was valid — about Sherman struggling to navigate the gulf between his upbringing on the streets of Compton, followed by success at Stanford athletically and academically.

“Well, I would say that Richard is an extraordinary young man and he has done a tremendous job,” Carroll said. “Through the educational process at high school, he was a really good student. He was a dynamic kid in high school at Dominguez. The fact that he got a chance to go to Stanford and cash in on the great education there — he has never forgotten where he grew up and where he came from. He’s been very respectful of that.

“I think he’s a very intriguing young man. I think you guys have all figured that out. So, I don’t know. I can’t put it in a sentence, either. But I think he’s an extraordinary guy. I have great respect for him and all that he does, and is attempting to do and the man he’s growing up to be.

“I think he’s going to be a significant factor. I think he’s really something. He’s still learning, and he knows that.”

Carroll seems to know Sherman well, so the tendency is to accept his view. But Carroll has a lot of emotional and team capital invested in Sherman, so he might not be too objective. Then again, after this latest conflation of that December episode, who is objective as well as knowledgeable about Sherman?

For sure, what would be good to learn is he’s just having fun with the dark side of a movie character.