At the scouting combine in Indianapolis, GM John Schneider admitted the Seahawks offensive line “got too young,” and they probably should have kept veteran guard Jahri Evans, who started 16 games for the Saints. 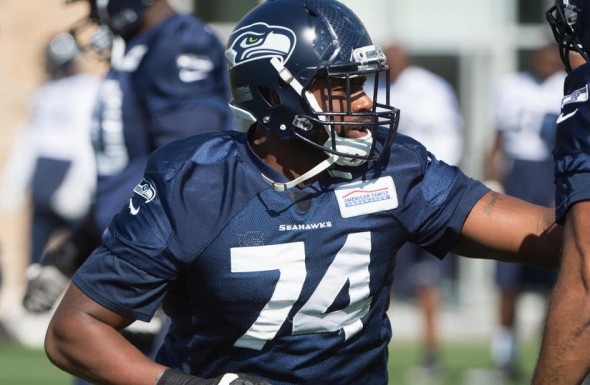 In so many words, Seahawks general manager John Schneider admitted Wednesday that, yeah, the bosses screwed up the offensive line in 2016.

From the decisions to sign mediocre free-agent tackles J’Marcus Webb and Bradley Sowell, to the decision to cut veteran former Pro Bowl guard Jahri Evans, to the forced elevation of undrafted rookie free agent tackle George Fant, who played basketball in college, the Seahawks made a hash of the O-line.

And they still beat both Super Bowl teams, made the playoffs and won a postseason game for the fifth consecutive season.

Imagine what would have happened if their O-line thinking cap wasn’t made of tin foil.

“I think we got in a position where we probably got a little bit too young,’’ Schneider told reporters in Indianapolis, site of the annual scouting combine. “I think we’d like to add some experience to that position.’’

Schneider waxed sardonic at the absurdity of resorting to Fant at midseason after none among Webb, Sowell or veteran holdover Garry Gilliam worked out at left tackle.

“God bless him, but holy cow,” Schneider said. “The guy was playing basketball (at Western Kentucky), you know what I mean? And he’s out there playing against (Rams DE) Robert Quinn. So good luck.’’

Good luck, indeed. Fant could still be there in September too, as could the rest of the line that included another rookie, RG Germain Ifedi, a second-year player, LG Mark Glowinski, and third-year pro Justin Britt playing center for the first time in his football life. Gilliam hung on, barely, to the right tackle spot.

Pro Football Focus graded the group 31st in the NFL.

The free agency period that begins March 9 is notably weak at tackle. The two players who seem to be valued most highly are Bengals Pro Bowler Andrew Whitworth, 35, and the Broncos’ Russell Okung, 29, who left Seattle for Denver in free agency a year ago. His deal is not going to be extended.

The Seahawks are about $25 million under the salary cap, but aren’t sure either player is worth the investment, especially figuring there will be competition for their services.  Then again, they passed on Evans, 33, who joined the Seahawks for training camp but was cut because the brain trust guessed he wouldn’t endure a full season.

So Evans re-signed with his old team, New Orleans, to become part of one of the NFL’s best lines, playing all 16 games next to former Seahawks center Max Unger. Regrets?

“Yeah, I’d be lying to you if I said differently,” Schneider said. “I think that his leadership would have been outstanding for us.

“He did a great job helping train some of the younger guys while he was here. But we were a little concerned about his durability, being an older guy. So we were just going to see how it went getting through that first week of the season.”

Schneider said he does year-to-year self-scouting of the team’s decision-making to see if things can be improved.

“Last year, signing a couple of guys in free agency who were not highly priced (Webb and Sowell), guys just kind of covered us, in case we got to the draft and all the offensive linemen got pushed up, like they usually do,” he said. “Yeah, there are always things you would do differently.

“But I don’t think we say, ‘This is the way we are doing it and we are sticking to it.’ We have different plans and are constantly moving them around.”

The O-line preference among Schneider, Carroll and line coach Tom Cable is to grow with young guys rather than hire from outside in order to develop the cohesion that’s crucial to to the unit. They can do that this spring because only Gilliam is a restricted free agent, meaning the Seahawks can choose to keep him. The rest are under contract.

That may take a priority over a one-season patch with a veteran.

“You’re trying to look out for not just 2017,  but looking out for 2018 and 2019,
“Schneider said. “You want to be a consistent championship-caliber. We don’t want to just cruise in for it, like ‘Hey, they are going to take a run.’ We want to be there every single year.’’

They accomplished that in 2016. But in the absence of retired RB Marshawn Lynch and the inability of the line to keep QB Russell Wilson healthy, the Seahawks were little threat in January to teams that didn’t have to compensate for a a major deficiency.